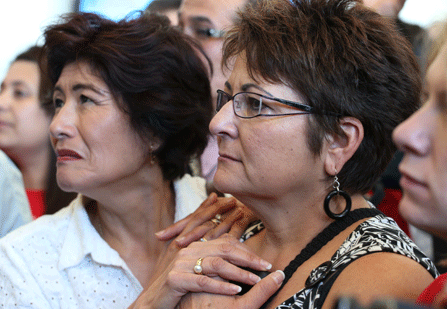 Gun curbs? Colorado got it done.

Democrats, with a majority in both houses of the Colorado legislature after years of shared control, seized all they could in a whirlwind legislative session that Senate Majority Leader Morgan Carroll described as “historically productive.” Republican Sen. Bill Cadman, the minority leader, put a different headline on a brutal year for the GOP: “Democrats push radical crusade against Colorado.”

Some 1,600 miles east, Raleigh, N.C., is Denver in reverse. North Carolina Republicans, who hold the legislature and the governor's office for the first time since 1870, are about to put a conservative stamp on education, tax policy, unemployment benefits and a range of social issues in a historically moderate state. There, it is Democrats who complain about being shut out of the debate.

Colorado and North Carolina stand out for their wide-ranging action, but they are part of a broader trend: In 37 states, one party now controls both the statehouse and governor's mansion, the most in 60 years. Both parties have used that power to make sweeping — and divergent —changes on a slew of issues, including guns, taxes, immigration, elections, gay marriage and more.

The flurry of action stands in stark contrast to the gridlock in Washington. Paralyzed by partisanship, Congress has been legislating at a glacial pace: Federal lawmakers haven't even agreed on budget in more than four years.

When it comes to making decisions, “obviously, states are doing a better job” than Congress, said Haley Barbour, the former Mississippi Republican governor and a longtime lobbying giant in Washington. “Senators talk about doing things, and governors do things.”

Those differences stem partly from the structures of government and federalism itself. Every state except for Vermont is legally obligated to balance its budget (though they occasionally do so through budget gimmicks). States don't typically enact "continuing resolutions," Washington's way of temporarily keeping the government open in lieu of a budget deal.

"Every teeny little thing needs to be approved," said Barbour. "You got to get things done. Otherwise, the government collapses."

States also tend to have shorter legislative sessions, giving lawmakers less time to put off decisions. And state lawmakers are much more likely to think alike, government experts say, a reality James Madison recognized more than 200 years ago. In the Federalist Papers, Madison argued that homogenous local governments should be balanced by a large, diverse federal body.

"The states are much more aligned," said Paul Posner, an expert on federalism at George Mason University. "It's the design of our government."

But the state-federal action gap has been widened by an elixir of new political realities, including a surge in one-party control that has drowned out minority party voices in some states and granted majorities —if they stay united — the power to enact almost anything they please.

In 37 states, one party now controls both the statehouse and governor's mansion, the most in 60 years. Both parties have used that power to make changes on a slew of issues.

In many ways, this was all the voters' doing.

Those who follow state government saw it coming when the dust settled on the 2012 election. Red states turned redder, blue states turned bluer and fewer states were purple. In many legislatures this year, the majority party outnumbered its opponents by 2-, 3- or 4-to-1—a phenomenon driven partly by partisan redistricting.

"At the same time Washington, D.C. is getting more gridlocked, we're seeing this historic moment of supermajorities in the states and legislation is speeding through the statehouses," said Thad Kousser, professor of political science at the University of California at San Diego.

The number of split legislatures has been whittled to just five: Iowa, Kentucky, New Hampshire, New York and Washington. Furthermore, in 22 states one party now enjoys a veto-proof majority in both chambers. Only two of those legislatures have to override the vetoes of a governor from the other party.

Arkansas is one of them. There, where Democrats had huge legislative majorities as recently as 2010, emboldened Republicans now control both chambers for the first time since Reconstruction. Lawmakers used that supermajority to override Gov. Mike Beebe's vetoes and enact tough new abortion restrictions and a voter ID measure.

Democrat-led states such as Colorado, Delaware and Maryland also struck back in the so-called "voting wars" by enacting a slew of bills designed to make it easier for people to register and vote. Republicans, citing the risk of fraud, have been pushing in the opposite direction.

States with strong Democratic majorities also approved in-state tuition or driver's licenses for people living in the country illegally. In Colorado, the changes came just a few years after the state barred immigrants in the country illegally from receiving public benefits and required local police to enforce federal immigration laws.

Meanwhile, Democrats in Minnesota ended a decade-long era of "no new taxes" by enacting $2.1 billion in new taxes, mostly on the wealthy. Colorado approved $1 billion in new income taxes to support schools, pending a required popular vote. And lawmakers in Massachusetts are considering raising taxes on gasoline.

By contrast, Republican-led Indiana sliced income taxes and Alaska slashed oil taxes. Kansas is paying for an income tax cut by hiking sales taxes (the rate will still decline next year, but less than originally set), while competing proposals in North Carolina broaden sales taxes and lower the income tax.

Perhaps no issue illustrated the divergence more starkly than gun control. On that issue, which moved to the top of legislative agendas after the mass shootings in Colorado and Connecticut, party politics largely shaped the new policies.

Joining Colorado, three other solidly Democratic states — New York, Connecticut and Maryland — tightened gun laws through a range of measures. Connecticut, for example, expanded its assault weapons ban and required owners of guns with high-capacity magazines to register with the state. Republicans chipped in some support, there, though Democrats didn't need it.

In New York, Gov. Andrew Cuomo, an outspoken advocate of gun restrictions, pushed through sweeping legislation in just two days, drawing outrage from Republicans, who complained that there had been little time to read the measures, let alone debate them.

Meanwhile, more than a dozen GOP-dominated states scaled back gun restrictions. Tennessee now permits owners to keep their guns in their cars, no matter where they park them. Wyoming will allow judges to carry guns into their courtrooms. Several states now recognize concealed carry permits from other states. And several states passed laws, though they may be unconstitutional, that would exempt gun owners from potential federal restrictions.

Of course not all decisions have been darkly shaded in red or blue. In Colorado, lawmakers came together to tax and regulate marijuana, which voters last year approved for recreational use. The negotiations were fierce, participants say, but hardly fell along party lines.

And in Virginia, legislators reached across the aisle to find billions in new revenue for long-needed transportation projects. Under a compromise with Democrats, Republican Gov. Bob McDonnell, who championed the package, promised to expand Medicaid under certain conditions. However, he has since refused expansion.

Such bold action carries political risks, particularly in states that are traditionally moderate.

Stateline's 13th annual Legislative Review looks at policy and politics in the states since legislatures began their work in January. The five-part series will include analytical articles, infographics and interactives.

But the movement has sparked loud protests from some corners of the state, which President Barack Obama narrowly won in the 2008 election and lost by two percentage points four years later.

“It's Republicans finally getting to go after their long-held wish list,” said Steven Greene, a political scientist at North Carolina State University. “They are feeling emboldened, perhaps overly so.”

Greene said the legislature's moves create vulnerabilities for Republicans like Gov. Pat McCrory, who campaigned as a can-do moderate.

Duke University professor William Chafe, an expert on North Carolina history and the civil rights movement, went even further. “The Legislature is basically showing contempt for the common good,” said Chafe, who has been arrested for protesting some of the new measures.

In Colorado, where gun enthusiasts are plentiful, efforts are underway to recall four legislators who voted for the new gun restrictions. Pueblo Freedom and Rights, one of two groups leading the recall efforts, accuses Democratic Sen. Angela Giron, who represents Pueblo, of showing “hostility and contempt for the fundamental constitutional liberty of her constituents to defend themselves.”

Carroll, the Senate Majority leader in Colorado, is aware of the political risks of bold action, but “there was a little bit of a now or never element of this,” she said. “If you don't take the opportunity to advance the agenda you believe will do the job, I think you're culpable.”