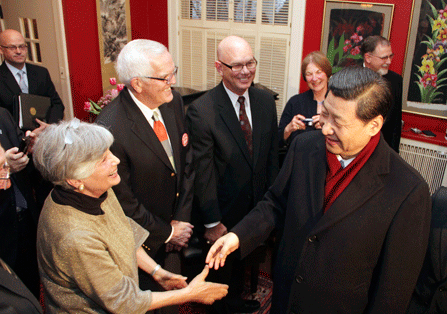 China's then-Vice President Xi Jinping, right, reconnects with Eleanor Dvorchak, left, in Muscatine, Iowa in 2012. Xi, now president, visited the city on a trade mission in 1985 and stayed in the Dvorchaks' home at that time. (AP)

One of every four rows of soybeans harvested in Iowa goes to China. That's the kind of export business a lot of other states are trying to cultivate with one of the world's largest markets.

Trade with the U.S. is likely a topic of discussion when President Barack Obama meets with Chinese President Xi Jinping at a private estate in southern California starting today (June 7). U.S. relations with China are important to states, many of which have seen exports to China triple and, in some cases, quadruple in the last 10 years. Worldwide, China was America's third-largest export market in 2012, behind only Canada and Mexico.

California exports the most to China at nearly $14 billion in 2012, primarily computers and electronics from Silicon Valley. Companies like Qualcomm, for example, manufacture semiconductors in California and then send the chips to China to be inserted into cell phones. Apple, HP, Intel and Sony Electronics all are based in California.

Texas, home to Dow Chemical, Chevron Phillips Chemical and Dupont, followed with $10 billion in exports, led by chemical products, including those used in making plastic.

Mostly because they are so large, California and Texas rank first and second in exports to China. But the rest of the top 15 exporters are as different as Georgia, Minnesota, North Carolina and Pennsylvania, according to the US-China Business Council, a group of 220 companies that trade with China.

Alabama, Nevada, South Carolina and Vermont have quadrupled their exports to China since 2003, the council said.

Xi is most familiar with Iowa, where he stayed with a farming family in 1985 during an agricultural tour as a local party leader. At the time, Xi met then-Gov. Terry Branstad, who is again serving as governor nearly 30 years later.

Last year, when Xi was Chinese vice president, he traveled with Vice President Joe Biden to Washington, D.C., California and Iowa, where he was honored by Branstad at a state dinner and reconnected with the family he stayed with years earlier.

“We are proud of our mutually beneficial trading partnerships with China,” Branstad said in his toast to Xi. “We hope to build-upon these partnerships in related areas where Iowa leads the world, such as biotechnology, advanced manufacturing, food processing and financial services.”

During that visit, China agreed to buy 8.6 million metric tons of soybeans from U.S. suppliers in a deal valued at $4.3 billion. China imports more Iowa soybeans than all other countries combined, the state said. All of Iowa's exports to the country totaled $3.2 billion in 2012, a nearly 460 percent increase over 2003. Iowa ranks 11th among all states in exports to China

While in Los Angeles, Xi also met with the governors of California, Vermont, Montana, Illinois and Hawaii as part of a “China-US Governors Forum,” established in 2011 during former Chinese President Hu Jintao's visit to the U.S. The National Governors Association helped organized the forum program.

The most recent forum took place this past spring in four Chinese cities. Branstad, along with Wisconsin Gov. Scott Walker and Virginia Gov. Robert McDonnell, all Republicans, met Xi April 15 in China's Great Hall of the People in Bejing. They were the first U.S. governors to meet Xi since he became president. Brown has a one-on-one session with Xi during his visit Saturday.

Washington state's ties to China likewise go back years, specifically to Gary E. Locke, who served as governor for two terms until 2005 and is now the U.S. ambassador to China.

While Locke was governor, the state more than doubled its exports to China to more than $5 billion a year, thanks in part to trade missions and his understanding of Chinese culture and international law. Locke, the first Chinese-American to serve as ambassador to China and as a governor, previously had been a partner in the Seattle office of an international law firm where he co-chaired the firm's China practice.

Washington state's top agricultural product is not salmon or apples as might be expected, but frozen potato products, mostly french fries. Next are frozen fish, wheat and cherries.

Brown & Haley Co. of Tacoma, the 90-year-old maker of Almond Roca candy, also has had success breaking into the Chinese market, selling millions of pounds of the upscale butter crunch toffee during the Chinese New Year. A key to the candy's success is its red and gold packaging, traditional colors of the holiday.

Stanley Chao, author of “Selling To China: A Guide to Doing Business in China for Small- and Medium-Sized Companies,” said governors' trips to China are often more about portraying an international, pro-business image rather than producing real results. But the state of Washington, which ranks 13th in population, has taken steps to secure the third-highest export spot.

“This tells me that Washington is going beyond the usual `greet and meet' trips to China,” he said. The state has examined what products they have that Chinese consumers want and spent time finding the right Chinese companies to partner with that know how to sell the products there, he says.

He credited the state for “realizing that this was a long-term effort that would take years rather than expecting results just after a few high-level meetings between politicians.”