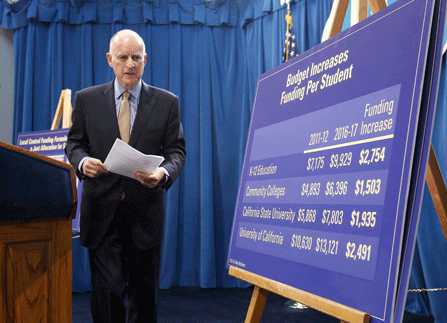 North Dakota's revenue jumped 74.6 percent, compared to a year ago, reflecting the oil boom, while California's went up 34.9 percent in the year-to-year comparison by the Nelson A. Rockefeller Institute of Government at the State University of New York.

In California, state lawmakers are debating what to do with their $4.5 billion more in revenue, which has led to a re-estimation of the state's budget. As in many other states, California's education, transportation and infrastructure sectors are competing for more funding.

On Monday, Democrats in the legislature urged more spending on social, health and educational programs, especially the state's “Middle Class Scholarship” program that cuts costs for tuition at state universities. But Republicans told Capital Public Radio such spending would undermine a cautious tack first articulated by Gov. Jerry Brown. A budget is due by June 15.

The Rockefeller Institute's compilation of preliminary data from 47 states shows that 39 states had revenue gains while eight states reported declines.  Personal income tax collections had the strongest growth among the major taxes, at 17.6 percent.  Sales tax growth was 6 percent, and corporate income tax growth was 3.5 percent.

The institute attributed much of the growth to acceleration of income into calendar year 2012, in an effort to avoid the possibility of higher federal taxes later in 2013. It noted that California, where income tax collections grew by nearly $6.3 billion, or 52.2 percent, in the first quarter of 2013, accounted for a large part of the increase overall. Excluding California, the rest of the nation showed growth of an average of a 9 percent in the first quarter of 2013.

Lucy Dadayan, senior policy analyst at the institute, cautioned against reading too much into the revenue growth, noting that the federal  “fiscal cliff” and sequestration have affected state revenues.  She also cautioned about the “spending side” of state budgets.

“On one hand, we have slowly improving revenues, and on the other hand we have rapidly growing spending pressures, including rising health care costs and growing pension liabilities,” she said. “This leads to a growing gap between revenues and expenditures, which in the long run would not be sustainable.”

The report noted that state tax revenue has been continuously recovering for more than three years, but is slower and more prolonged than previous recoveries, and is still far from a full recovery. While good news, the institute said the increase is “likely not an indication of rapid improvement in underlying economic factors.”