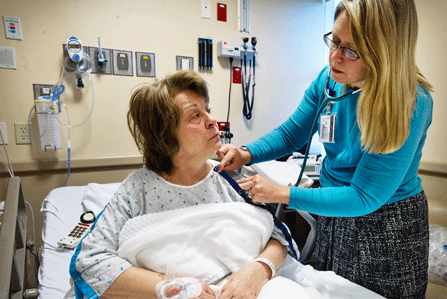 Politicians, for their own reasons, have the same question about the impact of the Affordable Care Act on insurance in 2014.

California recently announced the prices of plans that have been approved for the exchange. Surprising to many, the 2014 rates are substantially lower than comparable plans on the market today, according to Covered California, which runs the exchange.

That's good news for Californians and for the Obama administration.

Critics of the federal health law have long predicted that its new insurance regulations – such as the requirement that carriers cover people with pre-existing conditions – will cause premium “rate shock.” Proponents counter that the law contains market protections that should keep prices in check. In addition, low income people will receive subsidies to defray higher prices.

Nationwide, the price that uninsured Americans will have to pay for coverage in 2014 will vary widely from state to state. Although early news on premium prices from a handful of states is mostly promising, critics maintain that when exchanges open in all 50 states, the picture may be very different.

Considered the engines of the Obama administration's health law, the exchanges run by states and the federal government will allow consumers to comparison shop for individual and family coverage and find out whether they qualify for Medicaid or federal tax credits.

Here's a primer on how insurance rates on the exchanges will be set and why prices might be higher in some states than in others:

Which other states have announced preliminary exchange prices?

Colorado, Maryland, Oregon, Rhode Island, Washington and Vermont have made public the prices proposed by insurance companies on the exchange. The plans have not yet been approved.

In all but Maryland, the new rates are about the same or slightly lower than policies already on the market. Maryland's dominant insurance company – Care First Blue Cross Blue Shield – predicted a 25 percent hike in its premiums.

Until prices are approved by state regulators, they are subject to change. Insurance companies may have to go back to the drawing board if their prices are too high or their policies fail to conform to new requirements in the federal health law. Already, a few carriers have voluntarily withdrawn their proposed prices after seeing how much higher they were compared to the competition.

Why are California's rates surprising?

According to Covered California, the average price for an individual will be $321 per month, about $100 cheaper than the Congressional Budget Office predicted the national average would be for individual insurance plans.

The new policies offered by 13 different carriers are 2 percent above to 29 percent below the 2013 average premium for small employer plans, the group reported.

Health law critics say California's comparison is misleading, since it compares the rates of 2014 individual policies to 2013 small employer policies, which are more expensive and include better coverage than individual plans available today.

Others argue that California's comparison is accurate, since individual plans in 2014 will look more like small employer plans today.

When will all 2014 exchange premium prices be revealed?

The curtain will rise Oct. 1 when health insurance exchanges across the country go live. Until then, state insurance regulators will be reviewing thousands of applications from insurance carriers eager to sell their policies to an estimated 20 million uninsured Americans who will get federal money to purchase insurance – many of them for the first time.

Insurance industry applications started arriving in April and must be approved by July 31. Many states have disclosure laws requiring them to post all insurance rates once they are approved. As a result, state insurance commissions and local media are likely to provide early indications of prices in individual states.

How much can consumers expect to pay for individual coverage?

CBO estimated that the national average premium for an individual would be $5,200 a year, or about $433 per month in 2014. But it will depend on where you live.

Current average insurance rates for an individual range from $136 per month in Alabama to $437 per month in Massachusetts, according to 2010 data compiled by the Kaiser Family Foundation. But insurance policies and the benefits they cover are not the same from state to state, so it is impossible to make an accurate comparison.

Starting in 2014, however, all insurance companies will have to follow the same market rules and offer roughly the same benefits. That should have the effect of evening out rates from state to state over time. But in the process, rates in some states are expected to spike.

The prediction is that prices will be lower or flat in states like Massachusetts, New Jersey, New York, Oregon, Vermont, Rhode Island and Washington. These states already highly regulate insurance policies. States with more lenient regulations may see higher rates once the stricter rules in the federal health law are applied.

Why are premium prices expected to rise?

Insurance companies most often cite the requirement in the federal health law that carriers can no longer deny coverage to someone who is already sick or exclude coverage of their condition. Nor can carriers charge a higher premium price for people in poor health.

But other ACA provisions will also affect the price of premiums in 2014. For example, women cannot be charged a higher rate than men, and older people can only be charged a set amount more than younger people in the same community.

The health law requires all insurance policies – on the exchange and off the exchange – to cover a minimum set of benefits that include mental health and dental care, among other things.

One big concern, though, is that healthy people won't care whether the new policies offer better coverage. If the price tag is too high, they may choose to pay a federal fine rather than purchase insurance. That would cause premium prices to rise even higher for older and sicker people who do buy insurance.

Who can shop on the exchanges?

Anyone can shop on an insurance exchange. But only those who do not have employer-sponsored insurance or an affordable offer of insurance can apply for federal premium tax credits. “Affordable,” according to the U.S. Treasury Department, means the employee share of premium costs does not exceed 9.5 percent of their income. People who already have insurance but pay for it themselves will be eligible for federal subsidies.

Individual policies offered outside the exchange will have to follow the same market rules and offer the same benefit packages as those on the exchange, so their prices are likely to be similar. But the exchange will make it easier for people to compare policies and choose one that best suits their needs.

How much will premium tax subsidies pay?

For those with incomes from the poverty level ($11,490 for an individual) to four times that annual income ($45,960), the premium tax credits will sharply reduce the price of insurance. Based on projected income for the year ahead, the credits will be paid by the Treasury Department in advance, directly to the insurance company the consumer chooses.

Calculations of the premium tax credit will work much like the current application for federal student aid (FAFSA). Consumers will provide information about their income and the Treasury will determine the individual or family's ability to pay for insurance.

Kaiser Family Foundation offers a subsidy calculator to see if you qualify.