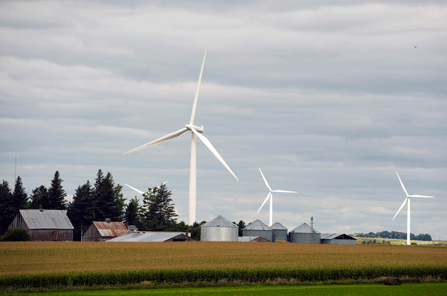 Wind turbines spin over a farm near Adair, Iowa. The state generates nearly a quarter of its energy from wind, first in the nation, and the number will soon grow. Across the U.S. the market remains volatile. (AP)

Iowa's vast crop of wind turbines is about to grow even larger.

Republican Gov. Terry Branstad touted the $1.9 billion project as the “largest economic development investment in the history of the state.” MidAmerican Energy is owned by billionaire businessman Warren Buffet, who is betting big on renewable energy.

Iowa is already a U.S. leader in wind energy production, thanks largely to a wind-friendly legislature, lack of local opposition and, of course, plenty of strong breezes.

Though Texas dwarfs other states in total megawatts produced, the much smaller Hawkeye state ranks first in the total share of wind energy it generates. (See table)

In 2012, wind accounted for nearly a quarter of Iowa's energy portfolio—24.5 percent--up from 19 percent the year before, according to U.S. Energy Information Administration data. Only neighboring South Dakota, at 23.9 percent, comes close.

The new MidAmerican turbines will likely tip the scales even more. This project alone will add as much as 1,050 megawatts, equal to about a fifth of Iowa's wind generation in 2012.

The news comes at a turbulent time for the wind industry. Just months ago, turbine manufacturers in Iowa and elsewhere laid off hundreds of workers, even though wind projects saw record growth across the country. New wind generating capacity trumped  even surging natural gas.

The wind industry now generates just 3.5 percent of the country's energy. As of March 31, slightly over 500 megawatts of projects were under construction, mostly in Plains states, according to the American Wind Energy Association. That's a fraction of the 8,900 megawatts in progress across 31 states last year.

The industry, however, expects development to ramp up in the coming months. Experts peg the boom-and-bust almost exclusively to uncertainty over federal policy. At issue is the Wind Production Tax Credit, a subsidy of 2.3 cents a kilowatt-hour for electricity generated over a wind farm's first 10 years of operation.

Wind farms use the credit, passed by Congress in 1992, to stay competitive with other energy sources, including low-priced natural gas. Without it, the industry can't keep pace, even though production costs are falling.

New wind proposals screeched to a halt near the end of 2012 as a gridlocked Congress debated whether to renew the multi-billion dollar credit. It was set to expire at the end of the year, and Congress approved it at the last minute. The Joint Committee on Taxation calculated the cost at $12.1 billion over 10 years.

Fiscal hawks argued the country couldn't afford it. But windy state governors, like Branstad, pushed hard for renewal, acknowledging the incentives may need to be phased out or restructured over time — a possibility many in the wind industry support.

“It's really hard to be able to invest millions of dollars in capital and labor without being able to ensure what the market will look like,” said Harold Prior, head of the Iowa Wind Energy Association.

Those efforts to keep the credit were successful, but only after many wind projects began to ratchet down. Industry members say they are only now recovering. Though new proposals are coming in, it's taking turbine manufacturers a few months to catch up.

Because Congress extended the credit only for a year, wind supporters are preparing for another fight on Capitol Hill. They do have some extra time, however, because developers can now claim the credit for projects that are only partially complete. Under the previous rules, projects had to be running by the deadline for companies to claim the credit.

“It should be a time of optimism in our industry, but because there's a lack of consistent federal policy, there's pessimism,” he said.

In Colorado, where more than 11 percent of energy came from wind last year, wind companies may have a reason for optimism. A bill on Democratic Gov. John Hickenlooper's desk would double the state's renewable energy mandate for rural electric cooperatives. The legislation would require 20 percent of their energy sales by 2020 to come from renewable sources, boosting business for the wind and solar companies.

Andrew Longeteig, a spokesperson for Vestas, an international turbine producer with a major hub in Colorado, said the new policy would be good news for his company, which significantly downsized in 2012's waning weeks. It is now hiring more than 100 new workers at a plant in Pueblo.

Nebraska's legislature last month overwhelmingly approved a sales tax exemption aimed at boosting the windy state's meager output. Though the state ranks fourth in wind-energy potential, it is in the middle of the pack in production.

Republican Gov. Dave Heineman has criticized the legislation, which is expected to interest a Kansas-based company in building a wind farm in Nebraska's northeast corner. In March, he called it a “misguided” attempt to cater to “out-of-state special interests.”

Some energy experts, however, say that wind could help keep costs low in the long term because it does not depend on a volatile fuel input.

“Wind's hedge value is as important today as it has ever been,” wrote Mark Bolinger, a research scientist at Lawrence Berkeley National Laboratory, in a March paper. “Despite the current low gas price environment, wind power can still provide a useful hedge against rising natural gas prices, particularly over the long term.”

Investors such as Buffett seem to think investments in wind and other renewables will pay off down the road. In his 2012 letter to shareholders, Buffett noted that MidAmerican, which operates in 10 states, accounts for 6 percent of the country's wind generation capacity and will soon own 14 percent of U.S. solar capacity.

“We are the leader in renewables,” Buffett wrote. 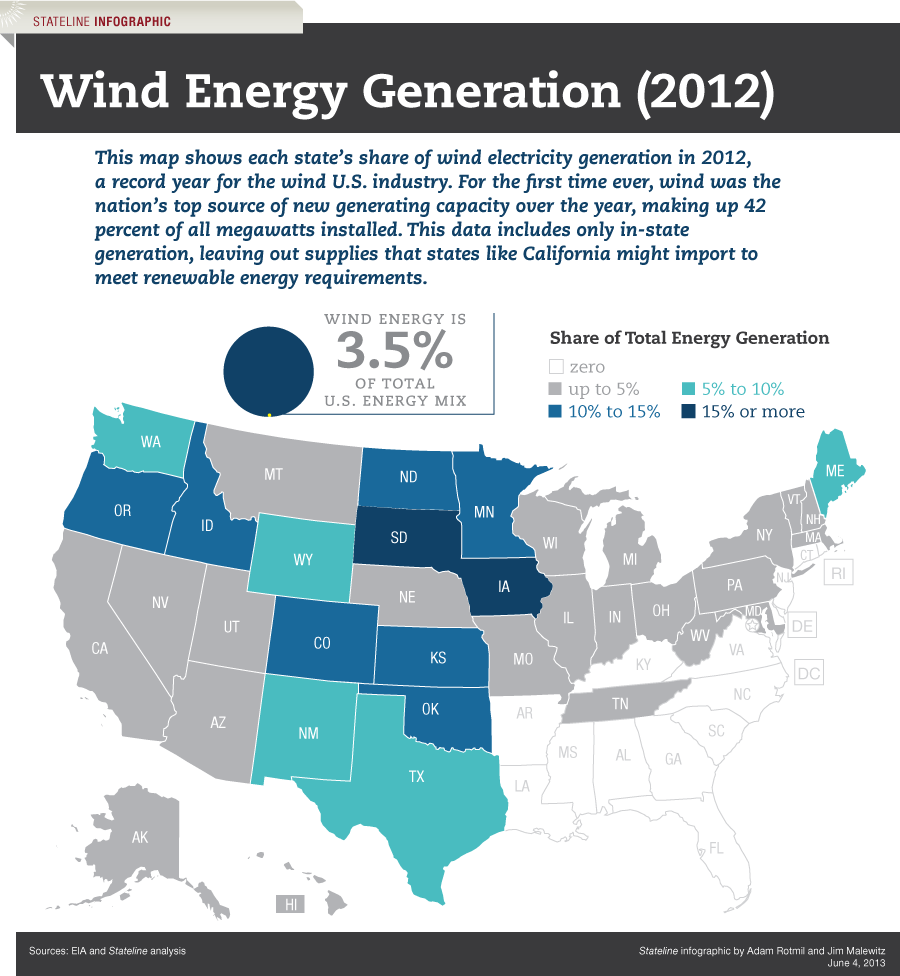