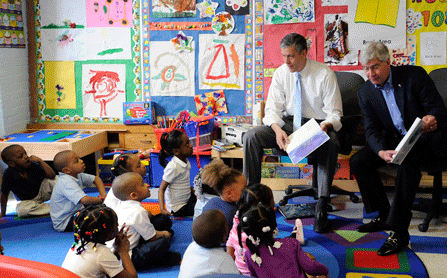 Education Secretary Arne Duncan and Michigan Gov. Rick Snyder read to a pre-kindergarten class in Detroit. Michigan is one of several states investing in pre-K. (AP)

President Obama is calling for a $75 billion investment over 10 years in high-quality pre-kindergarten programs. While Congress studies his proposal, governors and state lawmakers are forging ahead with their own ideas.

Still, it remains to be seen whether the money will follow at a time when state budgets are inching back after the recession.

A recent report by the National Institute for Early Education Research (NIEER) at Rutgers University's Graduate School of Education painted a gloomy picture of pre-kindergarten funding by the states in 2011-2012. The State of Preschool 2012 report found that state funding for pre-K programs dropped by more than half a billion dollars from the previous school year, the largest one-year drop in both dollars and percentage since NIEER began collecting data a decade ago.

Top 5 (percent of 4-year-olds, then 3-year-olds, enrolled in state-funded pre-kindergarten)

The report also found that enrollment in pre-K programs stalled last year after a decade of growth, marking the first time there was no increase in the percentage of children attending state-funded pre-K programs. State funding per child fell by more than $400, to an average of $3,841 per child.

This school year, state spending on pre-K appears to be growing, according to the Education Commission of the States. The group found that despite widespread cuts in state funding to K-12 programs, appropriations for pre-K programs serving four-year-olds increased by $181 million, or 3.6 percent, to $5.3 billion from the previous year.

“I think we're at a turning point,” said W. Steven Barnett, director of NIEER. “As we pull out of a recession and state revenues come back, will states prioritize pre-K or will they choose to spend the money on other things?”

Barnett said that while it appears states are spending more this year, mid-year cuts are always a possibility and it is unknown so far whether the increases in pre-K spending will keep up with inflation.

On Tuesday, U.S. Secretary of Education Arne Duncan planned to visit a Virginia school to showcase a high-quality pre-K program and promote Obama's proposal to expand access to early education.

Duncan's comments came ahead of an event at the New Bridge Learning Center in Henrico, Va., which provides services to 110 at-risk pre-K children. More than 80 percent of the children at the center qualify for free and reduced price lunches.

Duncan said the average child from a disadvantaged community starts kindergarten a year to 14 months behind. “That simply doesn't make any sense,” Duncan said. “We have to get out of the catch-up business.”

Obama's $75 billion proposal would provide grants to states for high-quality pre-K programs. Under the proposal, the federal government would share costs with states to provide pre-K for children from low- and moderate-income families as well as provide incentives for states to provide preschool opportunities for children from middle-class families. His proposal needs congressional approval.