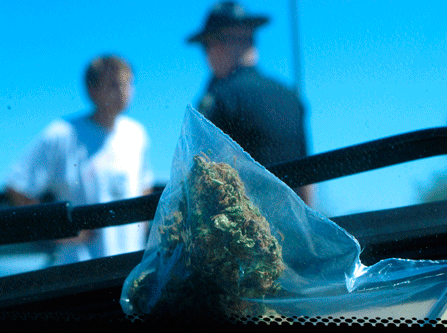 A man is stopped in Idaho and charged with possession of marijuana. States are spending billions of dollars each year enforcing marijuana laws, according to a new analysis by the ACLU. (AP)

African Americans are nearly four times more likely to be arrested for marijuana possession than white people, despite a similar rate of use. Meanwhile, cash-strapped states are spending billions of dollars enforcing marijuana laws, and the tab is rising.

That's according to a decade's worth of federal data analyzed by the American Civil Liberties Union. The group released a report Monday considered the most comprehensive examination of marijuana arrests.

"The war on marijuana has disproportionately been a war on people of color," said Ezekiel Edwards, one of the report's primary authors. "State and local governments have aggressively enforced marijuana laws selectively against Black people and communities, needlessly ensnaring hundreds of thousands of people in the criminal justice system at tremendous human and financial cost."

In 2010, states spent more than $3.6 billion enforcing marijuana possession laws, close to half of it on policing arrests, according to the data. The rest went to court costs and imprisonment.

The findings come as marijuana use is increasing in the U.S., and as the Obama Administration grapples with how to address recreational marijuana use in Colorado and Washington, which recently legalized it although it's still banned under federal law.

The nearly 8 million marijuana arrests between 2001 and 2010 accounted for more than half of all U.S. drug arrests, according to the report. The vast majority of those arrests — 88 percent — were for possession. The racial disparities existed throughout the country, including urban and rural communities, and among those of various income levels.

In 38 states, the racial disparity in arrests increased over the decade. The rate nearly quadrupled in Alaska, where there are very few African Americans. Minnesota, Wisconsin, Michigan and Kentucky saw the next-highest increases.

“Unfortunately, the findings aren't surprising,” said David Kennedy, who directs the Center for Crime Prevention and Control at New York's John Jay College of Criminal Justice. He said the unprecedented analysis was important in documenting the problems.

Kennedy said the trends are driven as police target perceived high-crime areas, often likely to have more African Americans. There, law enforcement comes into contact — and often searches — huge numbers of people, including many who aren't violent. Police often find small amounts of marijuana that may have otherwise never been discovered.

ACLU said its findings underscore a need to shift away from such “stop and frisk” police practices and quotas that incentivize the arrests.

More broadly, the group called for marijuana to be decriminalized or legalized and taxed, following Colorado and Washington's lead.

“At a time when states are facing budget shortfalls, taxing and regulating would allow them to save millions of dollars currently spent on enforcement,” the group said in a release, “while raising millions more in revenue – money that can be invested in community and public health programs, including drug treatment.”