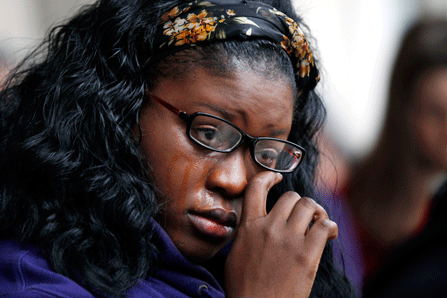 Tyamba Lamie, 22, wipes away tears at a gathering outside the New Jersey Statehouse. Lamie was forced into prostitution at the age of 13. New Jersey and Florida recently passed new protections for human trafficking victims.

Florida became the latest state to offer human trafficking victims a fresh start when Gov. Rick Scott signed legislation Thursday allowing criminal convictions removed from their records if they committed the crimes under threat from their trafficker. Florida has the third-highest number of calls to the national human trafficking hotline.

"Somebody who's been involved in human trafficking — we want to get them back to normal as quickly as we can," Scott said. Trafficking victims often amass convictions that include petty theft, truancy, loitering, drug possession and prostitution.

"Because of being trafficked, they end up with a criminal record that makes it very difficult for them to get a job, get into school, get on with their lives," Scott said. The new law is at least the fourth round of new human trafficking legislation passed since Florida first criminalized human trafficking in 2004.

“A victim's criminal record can be a major impediment in almost every aspect of daily life, whether applying for a job, renting an apartment, or requesting credit,” said Laura J. Lederer, founder of the Global Centurion Foundation, which focuses on stopping the demand for forced labor and commercial sex. “Until very recently,” she told The Washington Times, “almost every state treated the victims as criminals.”

This thinking is changing in states as the fight against human trafficking has evolved since Congress passed the Trafficking Victims Protection Act in 2000. For example, at last five cities and two states, California and Texas, have set up programs called “John Schools” where men arrested for soliciting prostitution are required to attend classes on public health and the link between prostitution and organized crime. In New York, lawmakers raised the jail time for patronizing a prostitute from three months to up to a year.

Still, trafficking is a major problem. Central Florida authorities broke up a trafficking ring three weeks ago. Two men were arrested for running the operation, which included forcing 16 women into prostitution through beatings, sexual assaults and other threats.

In New York, more than a dozen members of an international trafficking ring were arrested by U.S. Immigration and Customs Enforcement agents earlier this month for shuttling women from Mexico to New York for prostitution. Agents raided brothels in Yonkers, Poughkeepsie, Newburgh and Queens, according to the Department of Homeland Security.