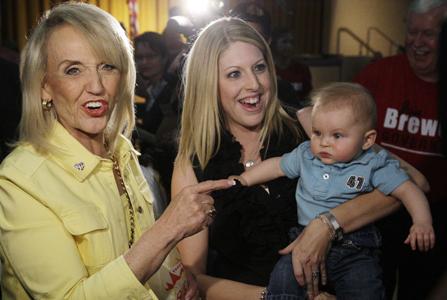 Arizona Gov. Jan Brewer campaigns for a temporary increase in the state sales tax in 2010. The tax expired on Friday—with Brewer's support.. (AP)

Arizona Gov. Jan Brewer, who put her political career on the line three years ago when she vigorously campaigned for a temporary sales tax increase, Friday celebrated what she called “that rarest of occurrences in government” – the expiration of the one-cent tax.

Speaking at the Arizona Capitol, the Republican crowed that the tax hike had done its job by raising $2.7 billion for the state and ameliorating what would have been steeper budget cuts to education, public safety and health and human services.

On Friday, Brewer said that the Arizona economy is in much better shape than it was three years ago, when it was “the worst in the nation on a per capita basis, according to some analysts.” Brewer bucked her party and her no-tax philosophy to campaign around the state for the tax increase. She credited the tax hike, along with budget cuts, for shoring up the state's fiscal situation and strengthening its economy.

Brewer was surrounded at the Capitol Friday by business and education leaders who praised her both for implementing the tax and for letting it expire.

“I knew the Arizona people could handle the truth – and the simple truth was that we needed more revenue,” she said. “I'm grateful to Arizona voters for having faith that this tax would do the job and then it would go away,” she said. “Just like we promised.”