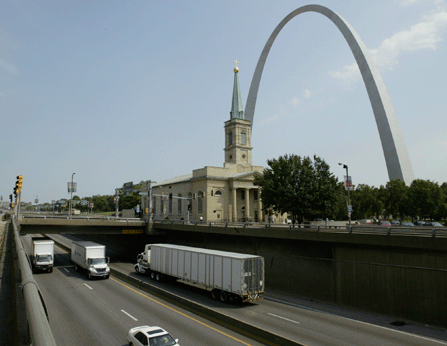 Missouri officials say Interstate 70, one of the oldest interstate highways in the country, is in bad need of repair. But Missouri, like other states, has struggled to find money to keep up with even basic road upkeep. (AP Photo/Tom Gannam)

Missouri's annual road budget this year, at $700 million, is little more than half what it was just a few years ago. Transportation money dropped since 2010 after a state bonding program that was paying for infrastructure improvements ended and aid from the federal stimulus ran out.

So now, the Missouri Department of Transportation is focusing almost all of its remaining money to fix just existing roads. There is no money for new interchanges or a long-sought widening of Interstate 70 between St. Louis and Kansas City, a major trucking corridor.

“We're at a point where we are going to take as good care of the system that we have now for as long as we can, but we know that we can't hold our own for long,” said Dave Nichols, the agency's director. “You don't add a room on a house when the roof is leaking.”

It is a frustrating situation all too familiar to transportation officials around the country. While a handful of states passed major transportation packages this year, many more are struggling to figure out how to simply keep up the roads, bridges and rails they already have.

“The maintenance idea has become the conservative position, or the fall back position, of these states that are not able to come up with a revenue package,” said Sean Slone, a transportation expert with the Council of State Governments. “But some states are even discovering that the do-nothing approach, the status quo, isn't even achievable given the revenue levels they have.”

Besides fallout from the recession, states are contending with a long decline in the buying power of per-gallon taxes for gasoline and other fuels. The taxes generally do not increase with inflation, and people tend to buy less gas per mile as cars become more fuel efficient.

But lawmakers at both the state and federal levels are loathe to raise gas taxes. That leaves cash-strapped states few attractive options for boosting road funding.

Missouri, for example, last raised its gas tax in 1992. But since then, the cost of building materials has tripled, the state says. Lawmakers there shelved a proposal before adjourning earlier this month to raise the state's sales tax by a penny to pay for transportation improvements. Legislators know the needs are great, Nichols said, but there are a lot of other areas in state government that need more money, too.

In the austere climate, states have focused on improving existing infrastructure. The number of bridges classified by the federal government as structurally deficient, for example, decreased by 14 percent between 2005 and 2012. And road conditions generally improved in the last four years, according to the American Society of Civil Engineers.

“While the conditions have improved in the near term …that level of investment is insufficient and still projected to result in a decline in conditions and performance in the long term,” the group wrote in its 2013 infrastructure report card.

ASCE says the federal, state and local governments now spend $91 billion annually on roads. The Federal Highway Administration estimates that $170 billion a year would be necessary to improve highway conditions and performance.

Michigan Gov. Rick Snyder, a Republican, pushed legislators early this year to devote $1.2 billion more a year on keeping up the state's roads. He told them spending money up front would save money in the long run, like changing a car's oil regularly instead of waiting for an engine rebuild.

But the Republican-led legislature balked at his ideas of raising registration fees and fuel taxes. Lawmakers also opted, for now, not to ask voters for a sales tax increase. Instead, the budget framework now pending in Lansing would spend an additional $350 million on roads, well short of Snyder's goal.

“While we're putting a lot of resources into roads, there's still more work that needs to be done,” Snyder said in a statement released after the budget outlines were revealed.

In South Carolina, transportation funding may fall to the wayside as Gov. Nikki Haley, a Republican, and the GOP-led legislature try to finish a packed legislative agenda.

The House and the Senate disagree on how much to spend on fixing up dilapidated roads and bridges, and where that money should come from. The governor recommended an extra $77 million for repair work in her executive budget.  Her proposal is closer to the House plan than the much bigger Senate measure, but she has not recently weighed in on the spending plans for the Department of Transportation.

In Washington state, the stumbling block in a proposal for major repairs is other items included in the package.

Washington Gov. Jay Inslee, a Democrat, is pushing a 10-cent gasoline tax hike to pay for an $8.5 billion transportation plan. Legislators are working on the proposal during a month-long special session in Olympia that started before the Interstate 5 bridge over the Skagit River collapsed last week.

One of the key sticking points is a new bridge over the Columbia River between Portland, Ore. and Vancouver, Wash. Republicans in a conservative bloc that controls the state Senate object to plans to include a light-rail line on the new span.

Still, the governor said the bridge collapse should remind legislators of the need for more transportation money. “I do hope that this incident will help us all focus our bipartisan effort to find a solution to our transportation needs,” he said Sunday.

The governors of Massachusetts and Pennsylvania are also pushing ambitious transportation funding measures with skeptical legislators.

Virginia approved a $6 billion plan to ease congestion in the Norfolk area and the suburbs of Washington, D.C. Neighboring Maryland passed a $4.4 billion deal that includes both major road improvements and new transit service. Wyoming's 10-cent a gallon tax hike will help the state maintain highways and localities pay for infrastructure.

All of those passed this spring, but each came after years of studies, debates, competing proposals and public outreach.

“What we've noticed ... is that it's pretty unusual for a state transportation proposal to pass on a first try,” said Joung H. Lee, associate director of finance at the American Association of State Highway and Transportation Officials. “It takes years.”

Just because those states passed transportation packages in short order does not mean the job is easier in other state capitols, he said. “It's still very difficult to convince the decision makers at the state level to provide a necessary amount of funding for investment in transportation.”

Missouri, Lee said, is a good example of those challenges.

Just last year, the state put the final touches on a three-and-a-half-year effort to upgrade or replace 802 bridges. The effort, called “Safe and Sound,” cost $685 million and finished a year and a half ahead of schedule.

But Nichols, Missouri's transportation director, said those gains will not last without more investments. Every year, he said, 100 more Missouri bridges become structurally deficient, adding to the repair backlog.

At the same time, increased traffic is putting a strain on Interstate 70, which was completed in 1965. The highway was designed to carry 18,000 vehicles a day, but now 31,000 vehicles travel it on a typical day. The transportation agency started studying expansion plans for the highway, including a concept for building truck-only lanes, a decade ago.

Money has been a major obstacle. The transportation department says expanding the interstate and keep up with maintenance would cost the state an extra $1 billion a year

“We have to do something, because it takes so long to get through these steps,” Nichols said. “We have to keep it on the front burner.”