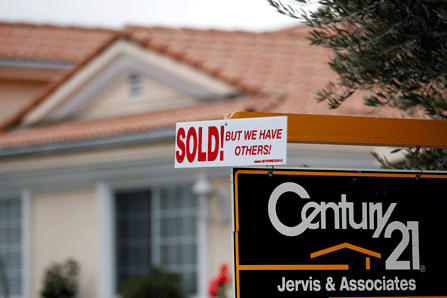 A real estate sign is seen outside a California home. Nearly one- third of all residential sales there involve foreclosed homes. Only Georgia and Illinois were higher. (AP Photo/Jae C. Hong)

Foreclosure sales accounted for 35 percent of all home sales in Georgia, the highest percentage in the nation. Other states with a high percentage of foreclosure-related sales were Illinois (32 percent), California (30 percent), Arizona (28 percent), and Michigan (28 percent).

“Arizona and California used to consistently be at the top of this list, along with Nevada, but those states are moving down the list because of a combination of a fast foreclosure process that has allowed the market to absorb the foreclosures more quickly as well as rising home prices, which is helping more homeowners at risk avoid foreclosure,” Daren Blomquist, vice president at RealtyTrac, said.

Georgia has had the highest percentage of foreclosure-related sales since the second quarter of 2012, surpassing Nevada, according to RealtyTrac.