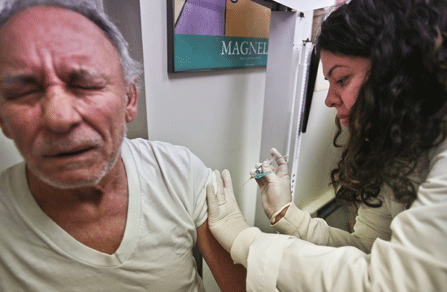 Carlos Maisonet, 73, gets a flu shot at Brooklyn Hospital in New York. The healthiest states for seniors to live are Minnesota, Vermont, New Hampshire, Massachusetts and Iowa, according to a new report. (AP)

Minnesota is the healthiest state for the elderly and Mississippi the least healthy for the 65 and over set, according to a report by the United Health Foundation.

Among Minnesota's strengths, the report says, are high rates of annual dental visits among the state's elderly, credible drug coverage, relatively high availability of home care workers and a low rate of seniors at risk for hunger.

Just behind Minnesota at the top of the rankings are Vermont, New Hampshire, Massachusetts and Iowa.

What landed Mississippi at the bottom of the list: A high percentage of elderly living in poverty and at hunger risk, a high rate of premature death, a low percentage of seniors who describe themselves as in very good or excellent health, and a low rate of annual dentist visits among the aged.

Joining Mississippi at the bottom of the list are Oklahoma, Louisiana, West Virginia and Arkansas.

Titled “A Call to Action for Individuals and Their Communities,” the report used 34 different measures in assessing each of the states. The foundation said it plans to update the seniors report every year.

The United Health Foundation has done overall health rankings of the states for nearly 25 years but this is the first time it has focused solely on the health of older Americans. It chose to do so because of the paradox that while Americans are living longer, they are also experiencing chronic illnesses earlier in life. Nearly 80 percent of seniors have at least one chronic illness and a quarter are obese, according to the report.

The trends could get dramatically worse. One in eight Americans is now 65 or older; another 79 million baby boomers are expected to arrive into that category in the next 20 years. “The growing number of seniors combined with the increasing rates of obesity, diabetes, and other chronic diseases may overwhelm our ability to care for our seniors,” the report said. 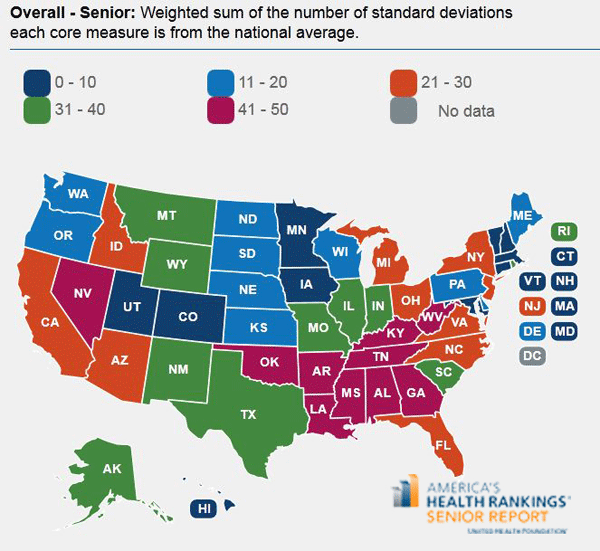