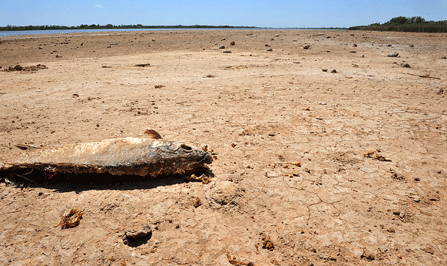 Drought-stricken Texas is one step closer to solving its long-term water woes, but a plan to pay for conservation efforts, new reservoirs and other infrastructure still faces a final hurdle: the voters.

Republican Gov. Rick Perry signed legislation Tuesday which would create a water bank to boost the state's water supply, which has been stretched thin by drought and rapid growth. The bill, which cleared the legislature despite opposition from fiscal conservatives, has been hailed by a broad coalition of business and environmental groups.

Texas estimates it will lose 10 percent of its water reserves over the next 50 years, a time when its population is projected to grow by 80 percent. With the state's years-long drought persisting, officials are angling for supplies in other states as well as looking for more water within Texas.

The state's most recent water plan calls for $53 billion in infrastructure upgrades — including the construction of 20 new reservoirs — that would help it meet about one-quarter of its water needs over the next half-century, according to state projections. The state has constructed similar plans before, but they have languished without the money to implement them.

The Perry-inked legislation would jumpstart a new revolving loan program by diverting $2 billion from the state's Rainy Day Fund, whose use has long been controversial. The money, Perry said, will pay for up to $30 billion in projects over the water plan's lifetime.

But voters must first approve a constitutional referendum, required by legislation passed earlier this year. And that's hardly a given.

“There's a lot of unframed public opinion on this,” said James Henson, who directs the Texas Politics Project at the University of Texas. “If you ask Texans if water is important, it doesn't really rise to the top, but if you frame it as a problem, people say we have to do something about it.”

The results, Henson said, will hinge on who best mobilizes in an off-year election with a low expected turnout: the business groups that helped push the plan through the legislature, or the smaller but perhaps more vocal Tea Party groups who prefer to leave the Rainy Day Fund untouched.

In 2011, Texas' driest year on record, voters narrowly approved a ballot allowing state water planners to issue $6 billion in extra bonds to fund water projects including fixing pipes and constructing treatment plants. But they voted down a proposition that would have lowered taxes for landowners who practice water conservation techniques.