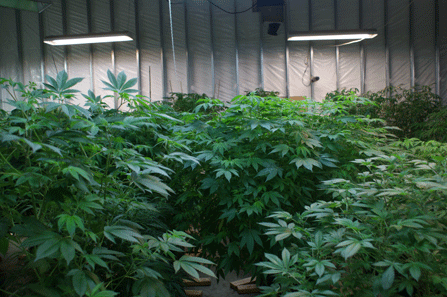 Medical marijuana grows in a state-licensed grow-house in Denver, Co. Florida advocates are hoping to create a similarly state-regulated system for medical marijuana through a constitutional amendment on the 2014 ballot. (Photo, Maggie Clark)

Florida lawmakers made it clear this session that they are not interested in legalizing marijuana. A bill to allow medical marijuana never got a hearing, and the state enacted a new ban on certain smoking pipes to further crack down on illegal marijuana use.

But recent polling shows Florida citizens are seeing through the haze. In a survey of 600 likely Florida voters taken earlier this year, 70 percent said they would likely vote to legalize medical marijuana through a constitutional amendment on the 2014 ballot. And 58 percent of those voters said they would definitely vote “yes.”

Advocates in Florida attempting to bring the question to voters next year could get a boost from a growing constituency of baby boomers in favor of medical marijuana. Support is growing among these voters who came of age at a time when drug experimentation was more open, and now, might be more likely to consider it for medical reasons.

In Florida, about 27 percent of the population falls into the 45-64 age range, which is nearly identical to the national average of about 26 percent, according to the U.S. Census Bureau. Florida outpaces the national average in the number of residents ages 65 and older.

More and more, these people are interested in trying medical marijuana as an alternative to prescriptions for aliments including pain and sleeplessness, said Robert Platshorn, a medical marijuana activist who organizes The Silver Tour, a Florida-based roadshow educating seniors about medical marijuana, and host of a nationally-aired infomercial called, “Should Grandma Smoke Pot?”.

Nationally, 77 percent of boomers said that marijuana has legitimate medical uses, according to a March 2013 survey by the Pew Research Center. In that same survey, half of all boomers said they support legalized recreational  marijuana.

“It's a natural shift in some ways, in terms of seniors,” said Ben Pollara, campaign manager for the Florida medical marijuana ballot initiative.  For baby boomers, “if they didn't smoke when they were younger, they know some who did,” he said.

The Republican-dominated political establishment in Florida remains firmly entrenched against any change in the state marijuana laws. Nearly 800 marijuana growing operations were shut down in the state in 2012, according to records from the state Department of Agriculture.

The advocacy group, United for Care, is leading the effort to get a constitutional amendment on the 2014 Florida ballot. The campaign has been active since 2009, but received a $150,000 cash windfall from two Democratic donors in March. The first $50,000 came from Barbara Stiefel, a top Democratic fundraiser based in Coral Gables, just south of Miami.

Orlando-area personal injury lawyer and Democratic fundraiser John Morgan gave the other $100,000, inspired to bankroll the 2014 ballot campaign after seeing how his father, suffering from cancer and emphysema, was helped by marijuana in his final days.

Working on the ballot

Putting a constitutional amendment on Florida's ballot might seem simple—after all, the 2012 ballot had 11 proposed amendments on it. But the process is “a long hard slog,” Platshorn said.

Platshorn remembers speaking to South Florida lawmakers two years ago, and when he told them he was advocating changing marijuana laws, “all 14 heads of the people on the dais went down and they didn't make any eye contact.”

The Florida campaign is off to a somewhat slow start. Supporters need 683,149 valid signatures by Feb. 1, 2014, and they don't yet have a petition to circulate. They expect to have one in June, based on the Arizona and Massachusetts medical marijuana systems. Both of those passed through ballot initiatives, but allowed the state to set the rules and regulations for dispensing medical marijuana.

Even if they get all the signatures they need, constitutional amendments require a 60 percent majority vote to pass. Plus, getting messaging out to almost 20 million Floridians requires ads in 10 media markets, said Damien Filer, a veteran of the Florida initiative process.

In states with smaller populations, such as Massachusetts, successful medical marijuana campaigns cost about $1 million in 2012, according to the National Institute on Money in State Politics. In Arkansas, the only other southern state to consider medical marijuana, a failed campaign there in 2012 cost supporters $1.5 million.

If it passes, a tightly regulated medical marijuana program like Florida is attempting shouldn't have to worry about federal intervention, said Stuart Taylor, Jr., a senior fellow at the Brookings Institution, at a forum earlier this year. “The states where federal enforcement officers are cracking down are the ones where…there's not very effective regulation,” Taylor said. “It's pretty chaotic in California. In other states, such as New Mexico and perhaps Colorado… the federal government has not been cracking down.”

“Where state regulation seems to be working reasonably well, they've left it alone,” he said.