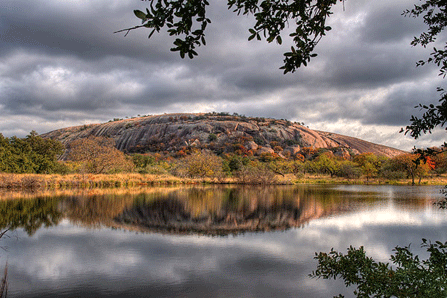 Enchanted Rock in Texas is one of almost 8,000 state parks in the nation. Many state and national parks face budget cutbacks that will affect visitors this summer. (Handout, Texas Parks and Wildlife Department)

National and state parks will be open for business this summer, but it won't be business as usual: Washington's sledgehammer budget cuts and fewer state dollars will result in overflowing trash cans, closed visitor centers and fewer Junior Ranger programs. Many vacationers will tread on runaway invasive plants, wait in long lines at park entrances and miss out on campfire talks.

Visitors will feel the effects of the spending cuts at some of the nation's most revered natural and historic sites.

Almost 8,000 state parks attract more than 741 million visitors a year. Many had to cut staff and shorten hours when state revenues plunged during the recession. In states that are still struggling, those cuts have not been reversed. Meanwhile, the automatic federal budget cuts that took effect March 1 are tightening the squeeze: The federal Land and Water Conservation Fund, which in 2012 gave $42 million in matching grants to states, is taking a 5 percent sequestration cut along with the rest of the National Park Service.

Overall, sequestration will cut about $150 million from the National Park Service, which oversees 401 national parks, monuments, battlefields, historic sites, seashores and other national sites in 49 states. The Park Service, which employs 22,000 people year-round, has instituted a hiring freeze that will leave 900 vacancies unfilled. In a normal summer, the Park Service hires an additional 10,000 people to handle the larger crowds. But this year, it will reduce that number by 1,000. The smaller workforce will result in less frequent mowing, sand-covered bike paths, messier restrooms and fewer interpretive programs.

State parks have been tightening their belts for several years, but some are in better shape than others, according to Philip McKnelly, executive director of the National Association of State Park Directors. Those with dedicated taxes or other stable revenue sources are faring considerably better than those that depend on money allocated by state legislatures from general funds.

“Most states are trying to operate in a more cost efficient manner,” McKnelly said. Some have closed parks and reduced programs and functions like restroom and garbage maintenance. Others are seeking concessionaires and private operators to take over some services, he said.

In some states, private help has made a difference. California was able to keep open all of its 280 state beaches, reserves and parks, thanks to more than $3 million raised by private donor groups and discovery of a misidentified $20.5 million state account. Up to 70 parks escaped closure, and 26 of them so far are beneficiaries of partnership agreements between the state and outside groups that will help operate them or financially support them, state officials said.

But private donations and partnerships with nonprofit groups to keep parks open are stopgap solutions, said Jerry Emory, communications director for the California State Parks Foundation. “A lot of these organizations have been stretched thin as they stepped up to really increase the amount of fundraising they were used to,” he said.

Even with the private help, visitors to California's state parks will find maintenance reductions and reduced operating hours. Five hundred fewer rangers, environmental scientists and other workers will be on the job, said Department of Parks and Recreation spokesman Roy Stearns. Some parks are experimenting with hourly fee machines to attract people who don't want to pay a full-day rate for shorter park trips.

In Washington state's 117 parks, there will be fewer workers, shorter hours, fewer interpretive programs and more deferred maintenance, said Virginia Painter, public affairs director for the Washington State Parks and Recreation Commission. A new entrance fee--$10 per day and $30 for an annual pass—has generated only about half of the projected revenue, requiring other reductions to meet the legislature-imposed cuts. 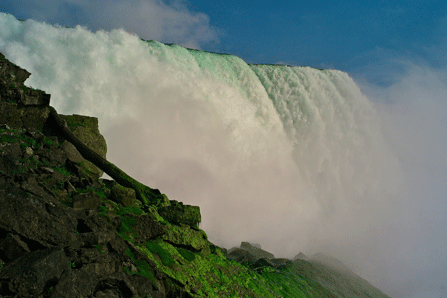 Niagara Falls bills itself as the oldest state park in the U.S. (AP)

The conditions at national parks also will vary. At Grand Canyon National Park, for example, the visitor center will open an hour later and close an hour earlier, and fewer entrance workers will lead to longer lines at the gates. “We have said for a long time we'll continue to do more with less. We're beyond that. We're going to do less with less,” said park spokeswoman Maureen Oltrogge.

But at other marquee parks, the belt-tightening won't be as obvious, especially in places where private groups have pitched in to keep visitor dollars flowing to local economies.

National parks in 2011 generated $13 billion in visitor spending in their nearby communities, supporting 162,400 local jobs, a study commissioned by the Park Service found.

Local businesses from tourism-dependent towns of Jackson and Cody, Wyo., came to the rescue when Yellowstone National Park officials announced they would wait an extra two weeks to open two snowy park entrances. The two communities, which reap $334 million a year in spillover economic benefit from 3.6 million Yellowstone visitors, figured the two-week closure could cost them as much as $4 million in lost hotel, restaurant and other revenue. The chambers of commerce and businesses raised $175,000 for snowplowing to open the roads on time.

Yosemite National Park is absorbing much of its $1.8 million reduction by leaving about 20 management vacancies open, said park spokesman Scott Gediman. Visitor centers will close an hour earlier, at 5 p.m. Visitors will be on their own to see the towering sequoias at Mariposa Grove, with no Yosemite rangers leading walks amid some of Earth's largest living things.

And in the nation's capital, the Fourth of July will be a more muted affair on the National Mall, with cancellation of the popular Washington Monument concert – the smaller of two that precede the Independence Day fireworks. The mountains of litter will take longer to collect, due to cuts in cleanup-crew overtime.

Other national parks around the country also have had to make budget-related changes:

After multiple years of budget cuts, National Park Service officials worry about greater impacts next year. “Something will give. That is not a recipe for a healthy Park Service into the next century,” Park Service spokesman Jeffrey Olson said, referring to the park system's centennial in 2016.

Meanwhile, outside groups are adamant that this year's life support can't continue. “Our businesses won't be able to step up again,” said Scott Balyo, executive director of the chamber of commerce in Cody, Wyo.