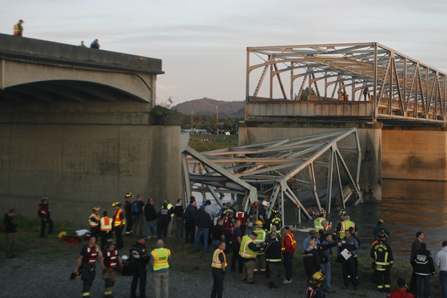 A portion of the Interstate-5 bridge is submerged after it collapsed into the Skagit River, dumping vehicles and people into the water in Mount Vernon, Wash. (AP)

The four-lane Interstate 5 bridge north of Seattle that collapsed into the Skagit River was rated by the Federal Highway Administration as “functionally obsolete.” That bridge, crossed by more than 67,000 vehicles a day, was in far better shape than many bridges around the country.

A bridge rated “functionally obsolete” does not meet current design standards for such things as lane width, often because current traffic volumes exceed what was expected when the bridge was built. In other cases, design standards have changed since construction. There are 84,748 bridges functionally obsolete bridges in the country, according to Federal Highway Administration data.

States with the most structurally deficient bridges:

But another federal rating of bridges, “structurally deficient,” is worse. They are not necessarily unsafe, but are “characterized by deteriorated conditions of significant bridge elements and potentially reduced load carrying capacity,” according to the FHA. There are 66,749 of them in the country, and they require significant maintenance and repair to stay in service.

The Washington bridge in  Mt. Vernon failed after a support was struck by a truck carrying an oversized load. Three travelers sustained minor injuries.

On the whole, Washington state's bridges are in pretty good shape compared to other states. According to an analysis of federal data by the advocacy group Transportation for America, 5.1 percent of Washington's bridges are structurally deficient, earning it a ranking of 46th most deficient by percentage.