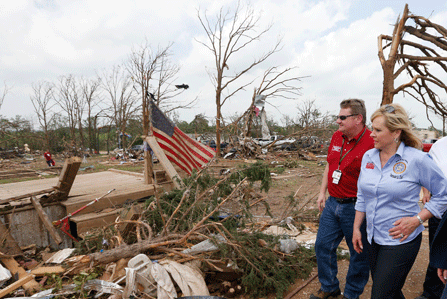 Albert Ashwood, Oklahoma's director of emergency management, was surveying last weekend's tornado damage with Gov. Mary Fallin on Monday morning, when he told her they had to leave immediately. The weather, he said, was getting worse, and the two of them needed to get to the command center.

Ashwood is the longest-serving state emergency management chief in the country. He has worked at the Oklahoma Department of Emergency Management since 1988 and, after his work in the aftermath of the 1995 Oklahoma City bombing, was appointed to lead it in 1997. He has served in that role ever since, under both Democratic and Republican governors. This is his 36th major disaster.

Oklahoma has been especially hard-hit in recent years when it comes to natural disasters, and experts in emergency management say Ashwood's long experience and innovative thinking have helped ease those recoveries.

“It makes all the difference,” said Trina Sheets, executive director of the National Emergency Management Association. “Disaster victims can be assured he understands everything that needs to be done for recovery.”

A good emergency manager is more of a coordinator than a first responder, said R. David Paulison, a former administrator of the Federal Emergency Management Agency. Oklahoma's response to the Monday tornadoes shows the state was well-prepared, he said.

The White House approved a presidential disaster declaration for Oklahoma just seven hours after the most lethal tornado touched down, and the declaration includes damages from last weekend's tornadoes as well.

“That happened almost immediately,” Paulison said. “That tells me Albert and his crew are right on top of things, and the governor has enough confidence in the emergency manager to know it's not a knee-jerk reaction.”

Since Ashwood became chief of the emergency management agency, he has helped the state recover through 36 disasters that merited presidential disaster declarations.

Paulison also said the quick deployment of search-and-rescue teams showed Oklahoma was ready, because it did not take long for the state to ask for and receive out-of-state teams to assist in the effort.

Even Fallin, the governor, told reporters Tuesday she deployed the National Guard before knowing what their exact mission would be after the storm.

At the briefing Tuesday, Ashwood stood next to the governor behind a lectern, wearing a white shirt sleeve shirt with the logo of his agency. He fielded questions about funding formulas for safety rooms, which could protect occupants from tornadoes. But mostly he watched as the heads of state and local agencies updated reporters on relief efforts.

The county would be taking in loose livestock at the fairground. The insurance commissioner talked about providing mobile ATMs and protecting residents against fraud. The police, firefighters, school officials and utility executives updated residents on their progress.

“(Ashwood) is very much someone who prefers to be in the background, in support, allowing local elected officials and the governor to provide that very public and needed leadership. He will do absolutely everything that the state can to help disaster victims recover as quickly as possible,” Sheets said.

Ashwood is well-known among emergency managers far from Oklahoma. He is a former NEMA president who is now leading the group's efforts to reform how federal disaster relief funds are administered. He is also known as a mentor and a coach, Paulison said.

“There's no secrets out there about who does well and who doesn't do well in these types of disasters,” Paulison said. “He has a very calm demeanor. He doesn't run around with his hair on fire. He's very thoughtful about what he says. That commands a lot of respect.”