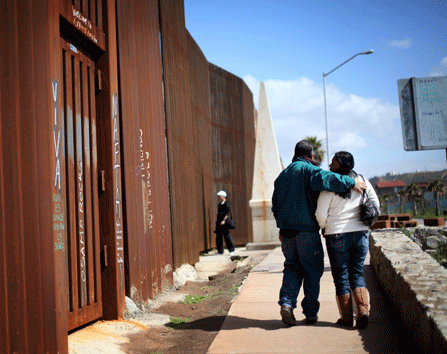 Tijuana, Mexico — A couple walks along the U.S.-Mexico border wall from the Las Playas area of Tijuana in February 2012. As the number of immigrants crossing the border decreases, the Obama administration and governors disagree over how secure the border is. (Copyright Sandy Huffaker/Corbis/APImages)

Border security is a crucial part of the immigration overhaul creeping forward on Capitol Hill—as it was during Washington's last, doomed attempt to tackle the issue. But in the seven years since, the security situation along the U.S.-Mexico border has been transformed.

The government has built 651 miles of fencing along the border—about three times what existed six years ago. The U.S. now operates hundreds of remote cameras, more than 13,000 ground sensors and five drones in the area. And the number of Border Patrol agents deployed along the border has doubled in the last decade, to more than 18,000.

Those steps, together with the sluggish American economy and record-high deportations, have slowed the flood of people trying to enter the U.S. illegally to a relative trickle: In each of the last two years, the Border Patrol caught fewer people than it had since 1971. For the federal fiscal year that ended in October, the agency stopped migrants nearly 365,000 times, compared to nearly 1.2 million apprehensions in 2005.

“The border is now better than it has ever been,” according to Janet Napolitano, homeland security secretary and former governor of Arizona.

But the current border-state governors—three of four are Republicans—say the federal government must do more. And if the immigration overhaul pending in the U.S. Senate becomes law, governors of those states will play a crucial role in determining how much border security is enough.

The measure the U.S. Senate is considering would require the federal government to stop 90 percent of people who try to enter the U.S. If it cannot meet that threshold in five years, border governors would help decide how to meet it. The governors also would be allowed to deploy the National Guard for border security-related missions.

“Border security has improved from where it was a few years ago, but we still have a long way to go,” said Brewer spokesman Matthew Benson. A spokesman for Texas Gov. Rick Perry echoed that view. “No matter what the administration says, the southwest border with Mexico is not secure,” Perry spokesman Josh Havens said.

New Mexico Gov. Susana Martinez, a Republican who hails from a border region, also has criticized the federal government for not providing enough border security.

The lone Democratic border governor, Jerry Brown of California, has largely stayed out of the fray on border security, even as he presses his state's large congressional delegation to legalize the approximately 2 million unauthorized immigrants in California. For Brown, border security is a matter best left to the federal government. “As the state has no authority in this area, we'd simply refer you to federal officials for comment,” said Brown spokesman Jim Evans.

One reason for the widely differing views on border security is that no one can agree on how to measure it. Even the Border Patrol has struggled to come up with an easy-to-use standard.

“I don't think there is a Dow Jones Industrial Average for border security,” said Erik Lee, from the North American Center for Transborder Studies at Arizona State University.

The Border Patrol once talked about the level of “operational control” it had along the line, but it gave up that measure two years ago, because it was too unreliable. Now, the agency is working on a “border conditions index” that will include factors beyond just security.

The Senate proposal would create an “effectiveness rate” by dividing the number of people who are caught or turned back while migrating illegally out of the total number who try. But it is hard to know how many people try to cross illegally and get away with it. The bill would pay for surveillance by drones in high-traffic areas to get a better count.

Other common measures include apprehensions at the border, survey responses in both the U.S. and Mexico, the number of Border Patrol officers, violence in border areas, the amount of money spent on enforcement and miles of fences built.

In Arizona, Brewer compares the situation in the eastern part of the state, known as the Tucson sector, with the situation in the west, known as the Yuma sector. A decade ago, the Border Patrol's Yuma sector was a hotspot for illegal immigration and smuggling. But after big increases in Border Patrol agents and new fencing, the illegal activity is a “tiny fraction” of what it used to be, according to Benson, Gov. Brewer's spokesman.

“We look at the Yuma sector as a model to follow” for the rest of the state, Benson said.

In Texas, Perry's spokesman Havens gave a broad definition for a secure border. “At the end of the day, we want the border to be so secure that it is no longer advantageous to conduct illegal activity across that international boundary,” he said.

Seizures of drugs and other contraband increased 83 percent along the border in the last five years, according to the Government Accountability Office. Roughly half the seizures in the federal government's 2011 fiscal year occurred in Texas, which has two-thirds of the U.S. border with Mexico.

Lee, the Arizona State researcher and co-author Eric Olson recommended looking at four major areas to get a good picture of border security: terrorism-related activity; violence on either side of the border; the amount of guns, money and drugs seized; and the number of people crossing illegally.

The View From the Front Lines

State legislators along the border, most of whom are Democrats, say they monitor the security situation by examining statistics and by talking frequently to their constituents.

Texas state Sen. José Rodríguez, a Democrat from El Paso, said there is little doubt that the new Border Patrol agents and other measures have improved security. Rodríguez criticized Perry and others for conflating terrorism, crime and illegal immigration because doing so “muddies the waters and is, simply put, bad public policy.”

New Mexico state Rep. Mary Helen Garcia, a Democrat who has been in the legislature since 1997, said she is most concerned about the fate of young immigrants who were brought into the country illegally by their parents, when the borders were more open. And in California, Assembly member Toni Atkins, a San Diego Democrat whose district includes the westernmost sliver of the Mexican border, said her area needs “practical and humane border enforcement that includes a process for ensuring smooth cross-border traffic, which is vital to our local economy, and supports family connections.”

But Arizona state Rep. David Gowan, a Republican, said homeowners and ranchers in his district in the southeast corner of the state are still afraid of the illegal activity in the area. Heavily armed smugglers are often seen crossing the area. Migrants who cross ranchland often cut fences, which can set loose cattle, or leave garbage on the ground, which can kill livestock if they eat it.

“It's a little bit of a battleground here,” Gowan said. The lawmaker, who criticized the Obama administration's lawsuit to block Arizona's latest anti-immigration law, made it clear he is no fan of the Senate proposal—even though Arizona's two U.S. senators helped draft it. “We want the border secured,” he said.