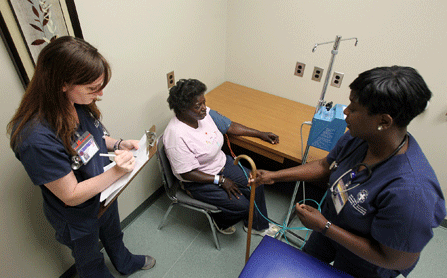 Emory University nursing students conduct a health assessment and check the blood pressure of a patient in Atlanta, Ga. Republican governors and legislatures across the Deep South have rejected the Medicaid expansion in the Affordable Care Act, but a new poll shows residents have a different view. (AP)

A large majority of people living in the Deep South supports the Medicaid expansion in the Affordable Care Act, even though their governors and representatives oppose it, according to a new poll.

The Republican governors and legislatures in Alabama, Georgia, Mississippi, Louisiana and South Carolina have rejected the Medicaid expansion, which would extend health care coverage to more low-income people. But a poll conducted in March and April by the Joint Center for Political and Economic Studies found that 62 percent of the people in those states support the expansion, one of the key instruments in the Obama administration's strategy to reduce the number of uninsured Americans.

“This survey clearly shows that governors and state legislators in the South who are resisting the Medicaid expansion are out-of-step with their constituents,” said Brian D. Smedley, director of the Joint Center's Health Policy Institute. The Washington-based think tank focuses on issues affecting African Americans and other minorities.

Across the five states surveyed, support for the Medicaid expansion ranged from a low of 59 percent in Mississippi to a high of 65 percent in South Carolina.

According to the survey, 85 percent of African Americans and 53 percent of non-Hispanic whites who live in those five states were in favor of expansion. Among those who identified themselves as liberal, 78 percent favored expansion, versus 47 percent for those who considered themselves conservative.

When respondents were given a bit more detail about the Medicaid expansion—for example, that states eventually will have to cover 10 percent of the costs—support dropped to 54 percent.

Respondents in the survey were not fans of the Affordable Care Act as a whole. Nearly 44 percent had an unfavorable view of the new law, compared to 33 percent who had a favorable view.

However, when they were questioned about individual elements of the law, a majority of the respondents opposed only one of them—the financial penalty that will be charged to any American without health insurance after 2014. Other surveys have yielded similar results.

The survey included 2,500 respondents (500 in each of the states) with an overall margin of error of about 2 percentage points and a 4.4 percent margin of error for individual states.