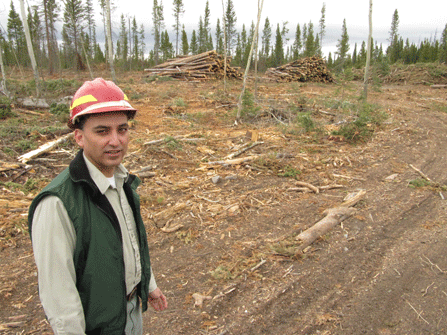 Larry Sandoval, a district ranger in southern Wyoming's Medicine Bow National Forest, stands in an area cleared of beetle-killed pine trees near Foxpark. Beetles are just one of many invasive species that have vexed resource managers and cost taxpayers billions of dollars each year. (AP)

Several state and local resource managers have called on Washington to step up the fight against an alien invasion wreaking havoc on U.S. lands and waters that costs taxpayers billions of dollars each year.

The officials, testifying at a U.S. House subcommittee hearing Thursday, said federal agencies need to better coordinate efforts to block the advances of foreign plant and animal species that have been shipped, flown or trucked into the U.S. — a problem that some say is worsening despite three decades of efforts.

“Little progress has been made,” said George Beck, a professor of weed science at Colorado State University. “We as a nation are digressing, rather than progressing on invasive species management.”

The full roster of invaders is hundreds of names long, and includes headline-grabbers such as the Burmese python, Asian carp, zebra and quagga mussels, and several types of beetle, alongside the lesser-known — but still destructive — leafy spurge, yellow star-thistle and knapweed.

Each species has ravaged ecosystems in its own way, whether by chomping through and strangling trees, disrupting food chains, devouring agriculture and increasing wildfire threats.

All told, the invaders cost taxpayers as much as $138 billion each year, according to the National Association of State Foresters. They harm a range of industries, including fishing, farming, lumber harvesting and energy production.

States have used limited resources to attack the problem on their own lands, and some have claimed minor triumphs. Last March, for example, New Jersey declared victory over the Asian longhorn beetle after a decade-long fight.

But states play a more limited role when it comes to infestations of millions of acres of federal land, an area of acute interest for Western states, where wide swaths are located. Problems on public lands often trickle onto state and privately owned lands.

Many invasive populations are exploding. In 2009, for instance, the federal government treated only 3.2 percent of the 50 million acres infested by invasive weeds, according to calculations by the Healthy Habitats Coalition, a group of land managers and conservationists. The infestation is on pace to double by 2019.

Federal agencies often partner with states on federal lands, but navigating Washington's winding bureaucracy can be difficult and time consuming, state officials said.  As many as six federal agencies have jurisdiction over invasive species.

Recognizing the problems, President Clinton in 1999 instituted the National Invasive Species Council, a group of experts that has released recommendations but has no rule-making authority.

“We have different sets of policy and different budgets that we have to deal with all the time,” said Jason Fearneyhough, head of the Department of Agriculture in Wyoming, where the federal government owns nearly half the land. “There simply needs to be more on-the-ground implementation of management efforts.”

Time is critical in fighting the invaders, experts say, because they can spread so quickly. The best defense is to thwart invaders at the border, largely the federal government's responsibility.

But once the species arrive, Fearneyhough and others said it can take too long to approve of certain eradication methods. A new pesticide meant to kill invasive beetles or plants, for instance, requires approvals from the U.S. Environmental Protection Agency, Bureau of Land Management and Forest Service, he said.

“You should make sure the chemical you're using is viable and safe,” he said, “But once the EPA decides that should be the end of it.”

Some officials said federal resources could be better managed locally.

Debra Hughes, executive director of the New Mexico Association of Conservation Districts, said her group has worked with state and local officials and private groups to address threats of wildfires and invasive plants and bugs on some 2.1 million of 5 million acres of vulnerable public land in New Mexico, a stark improvement from the 15,000 yearly acres that had been treated earlier.

Those efforts, she said, helped prevent the addition of the dune sand lizard to the federal endangered species list.

Through an agreement, the Bureau of Land Management has allowed the group to distribute more than $14.4 million for the efforts, and it has also raised private money.

“It's bringing everyone together who have the same interests,” Hughes said.