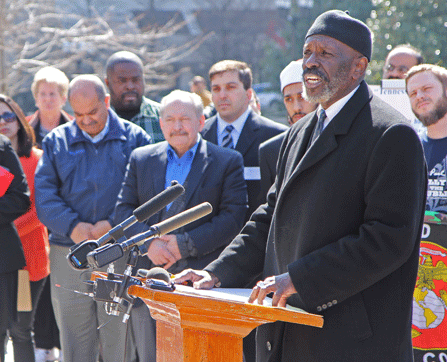 Civil rights activist Victor Abdulla speaks at a press conference in Nashville, Tenn., in opposition to a legislative proposal to make it a felony to follow some versions of the Islamic code known as Shariah. Five states, including Tennessee, ban foreign law in state courts. (AP)

State bans on Islamic Shariah law and other foreign law systems have passed in five states and been debated in 32 states. These bans have consequences that could complicate international business, contract law and dissuade foreign businesses from dealing with U.S. companies, researchers say.

“Foreign law bans are clearly a solution in search of a problem,” Matthew Duss, policy analyst for the Center for American Progress, said Thursday. “The bans send a clear message that states are unreceptive to foreign businesses and individuals, especially Muslims and other minority faiths.”

The wave of state actions started in Oklahoma in 2010 with a voter initiative to ban Shariah law in state courts, which passed with 70 percent of the popular vote.  It was struck down as unconstitutional by the 10th federal circuit court in 2012.

Since the Shariah-specific ban was struck down, supporters have instead sought to ban all foreign law in state courts so as to keep from singling out any religious group. Legislatures in five states, Kansas, Oklahoma, Louisiana, Tennessee, and Arizona, have passed foreign law bans and states continue pass them. Missouri lawmakers just last week sent a foreign law ban to Gov. Jay Nixon. And North Carolina lawmakers just passed a foreign law ban through the state House Judiciary Committee.

There has been some pushback. In Florida this year, a foreign law ban was defeated after successful lobbying by the Florida Bar Association, Jewish groups and the Anti-Defamation League who argued that the ban would hurt Florida trade with Israel and other countries.

“The message being given to the Jewish population and other minorities is a very unwelcoming one,” said Linda Geller Schwartz, the president of the Nation Council of Jewish Women, in an interview with the Palm Beach Post.

Additionally, the need for the bans is also questionable, said Faiza Patel, co-author of a Center for American Progress report on foreign law bans.

“Our courts have been dealing with international law for a long time, for example in foreign contracts law, or looking at foreign law when deciding whether to recognize a foreign marriage or divorce,” Patel said. “Courts don't just apply foreign law in most cases, and will only reference it when it does not conflict with U.S. public policy.”

The bans might also threaten the separation of powers, by giving the legislature power over what laws the courts can consider when rendering a judgment.

The bans aren't just a problem for Muslims, Patel said, “but for people who marry or divorce abroad, adopt abroad, or conduct business abroad. Foreign law bans are a solution in search of problem, and they're going to create a bunch of new problems.”