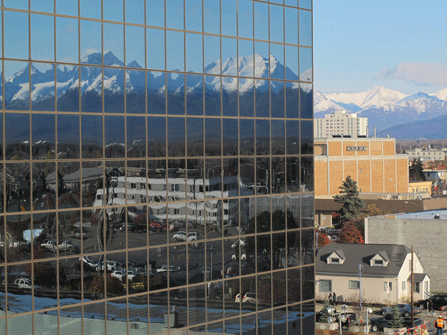 An office building in Anchorage, Alaska, where state taxes on businesses are the highest in the country, according to a new report. (AP)

Overall business taxes are lowest in Delaware and highest in Alaska, according to a study from the boutique economic consulting firm Anderson Economic Group. But how much an individual firm may pay depends on the kind of business.

Businesses in Delaware paid 5.1 percent in state and local taxes, while those in Alaska paid 25.2 percent, the report said. The states were ranked according to the percentage of businesses' operating margin that states taxed. Operating margin is, broadly, profit before the business pays its interest on loans and taxes.

The report also showed that U.S. businesses paid more than $623 billion in state and local taxes in 2011, the latest year for which figures were available.

The largest percentage of taxes paid by the businesses are property taxes, general sales taxes and unemployment insurance taxes which accounted for 68 percent of the total state and local taxes paid by businesses in 2011, according to the report.

Alex Rosean, one of the authors of the study, said Delaware is particularly low in how much it taxes businesses because it has no corporate or individual income tax, a low property tax and a low unemployment compensation tax.

The lowest tax states (as a percentage of operating margin):

“They also don't have a sales tax,” Rosean noted, adding that the economy in Delaware has been doing better than many other states, allowing the First State to keep taxes down.

As for Alaska, Rosean said that state also has a low individual income tax and no sales tax. But it has a relatively high corporate income tax, and, he added: “They have an absolutely gigantic severance tax, a tax on mineral extraction. As soon as a barrel of oil leaves the ground, they tax it.

“It's smart on their part because businesses can't say they are going to move to Colorado and drill for oil there,” he said.

But Alaska was losing out to drilling in other states like North Dakota, Pennsylvania and Texas, and just this year, decided to lower the taxes on oil companies in a bid to lure them back. This was labeled risky strategy by some opponents in Alaska, which depends deeply on oil revenues to fund the state budget.

Peter Fischer, an economist with the liberal organization “Good Jobs First,” and author of the report “Grading Places: What Do the Business Climate Rankings Really Tell Us?” said the Anderson Economic Group study is on target.

“This one actually tries to measure the amount businesses pay,” said Fischer. “They are looking at the right things, not mashing all the numbers together and trying to come up with a meaningful index.”

Fischer favorably compared the Anderson Consulting report to one done last year by the accounting firm of Ernst and Young, which also found Delaware to be the lowest business tax state.

Fischer said the trouble with all of the studies is that they don't differentiate between industries. For example, the severance tax is not paid by other kinds of manufacturers in Alaska, and if you take that tax out of the equation, business taxes would be lower overall.

“The idea that there's a single business plan isn't right,” he said. “But as a rough estimate, it isn't bad.”