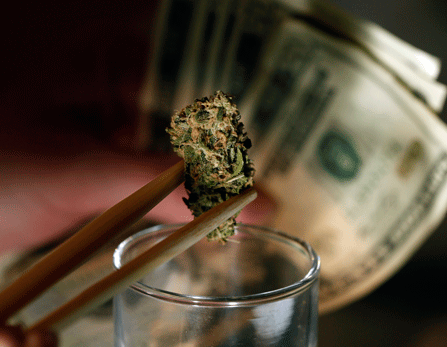 A caregiver picks out a marijuana bud in Denver. Colorado and Washington state want more tax revenue from legal recreational use, but will it fall short? (AP)

When Colorado and Washington voted to legalize marijuana for recreational use, supporters sold the idea partially based on new tax revenue estimates that ranged as high as $2 billion over five years.

But recent reports and analyses offer some advice: Don't spend that money yet.

“Nobody has any idea (about revenue),” said Jeffrey Miron, a Harvard economist and analyst at the libertarian Cato Institute. “There's only one good way to find out what the revenue would be, and that would be for all levels of government to legalize it and then we see what happens.”

While many states have legalized marijuana for medical use, nationwide recreational legalization is not likely anytime soon. Meantime, economic studies in both Colorado and Washington — the first two states to legalize marijuana for purely recreational use — have ventured predictions that played into the successful efforts to legalize the drug.

In a widely cited study of the Colorado law, the Colorado Center on Law and Policy predicted that marijuana legalization would produce $60 million annually in new revenue and savings for the state each year until 2017.

The taxes on marijuana sales include a 15 percent excise tax (dedicated to school construction) and a 10 percent sales tax, for a total of 25 percent. According to the study, those levies would bring in $32 million for the state budget, $14 million for local governments and would result in a savings of more than $12 million in state and local law enforcement spending.

The first $40 million of the excise tax revenue is dedicated to school construction. Extrapolating from there, the study projected economic development based on anticipated tax revenue — counting on 372 new construction jobs to build schools.

Last week, Colorado lawmakers approved the taxes and set other regulations. Gov. John Hickenlooper, a Democrat, is expected to sign the bill. The taxes then go before the voters in a November referendum. If approved, the regulations would take effect in January.

The $60 million estimate is still being discussed, but a more recent study tempered expectations. The Colorado Futures Center at Colorado State University concluded that while revenue will be raised, it may not meet the state's expectations, particularly the 15 percent tax targeted for school construction.

The report concluded that for the tax to raise the $40 million anticipated for schools, given current consumption estimates, the cost to grow a pound of marijuana would be in the range of $1,100 a pound, almost twice earlier estimates. That level risks raising the price of retail marijuana so high that it could send users back to the black market.

“Our overall conclusion was while there is some revenue here, this is not a panacea for fiscal imbalance going forward,” said Phyllis Resnick, lead analyst and author of the report. “Our conclusion at the end was there is at least a risk, even with a high revenue number, once you take all this into account, there is not going to be a significant amount left over relative to the size of the (state's budget) gap,” which is anticipated to be $3 billion to $3.5 billion by 2025.

Brian Smith, spokesman for the Washington State Liquor Control board, which will regulate legal marijuana sales, said licenses to sell pot will be issued beginning in December. Taxes of 25 percent will be imposed at three levels — producer, processor, and retail.

Smith said it will take time for money to make its way to state treasury. “Until you start those initial sales between producers to processor, you won't begin the flow of revenue,” he said.

While noting the lucrative tax estimates, Smith said the state is being cautious and hasn't “banked” any of the revenue for the next two-year budget cycle, which begins in July. “It's too unknown,” he said. “We're operating as if we are going to implement this (tax) system, but the future is unknown.”

An ounce of recreational marijuana is projected to cost, with all taxes added:

Both states have made assumptions about consumption of marijuana in order to set their revenue estimates. For example, the Washington state study used the U.S. Department of Health and Human Services national drug survey from 2008-2009, which estimated that 17.2 percent of Washington residents aged 18 to 25 used marijuana, plus 5.6 percent of those over 26.

From those figures, the study estimated 363,000 Washington marijuana users in 2013, plus a 3 percent increase in 2015 to account for population growth and inflation. (Colorado and Washington will restrict recreational use to those over 21.)

“My intuition tells me there will be a cross border effect,” said Scott Drenkard, an economist with the Tax Foundation who has studied the issue. “It will be cheap and available. That's something to consider. There is going to be a tourism boom of some sort. It won't be illicit.”

But he added, “It's hard to know because it's an entirely new product on the legal market.”

Another wrinkle: Taxes may be harder to collect because pot sales are a cash-only business. It is cash at the medical marijuana stores open in many states and it will be cash at the new recreational marijuana stores. That's because no bank will knowingly approve credit card sales for the drug, nor knowingly take deposits from the transactions, since marijuana is still illegal under federal law.  A financial institution could be fined or reprimanded if it handled marijuana money, even in states where it is legal.

“The short answer is we don't (deal with marijuana business) said Don Childears, president of the Colorado Bankers Association. “I don't know how the state regulates or taxes an industry when it can't follow the money. No financial institution ­— bank or credit union or anything — may handle any kind of marijuana business, medicinal or recreational, because it is illegal under federal law so we can't touch that business.”

There have been anecdotal reports out of both states that medical marijuana shops have underground relationships with banks that wink at the source of cash, or title their businesses as something innocuous, like “Suzie's Cookies,” so a bank won't guess the source of the deposits.

But there is a bit of a problem in cash deposits, according to Childears, because marijuana has a distinct odor which can be picked up on currency.

“An easy way to detect these businesses is literally by the smell of the currency,” he said. And if that's the case, banks are obligated to report it to authorities.

Meg Sanders, CEO of Gaia Plant-based Medicine, a medical marijuana company in Denver, is all too familiar with the banking hassles. Determined to pay her taxes, Sanders takes cash to a post office and gets a money order.  Or, she uses funds from another business she owns to get a cashier's check from a bank and then uses that check to pay the Gaia company's taxes.

“It gets done, but it's not easy,” she said. “It's challenging because we can't have a bank account. It takes extra steps in an already arduous process to make sure we get our taxes paid.”

The Colorado Department of Finance reported collecting $5.4 million in taxes on medical marijuana in 2012.  Sanders maintains that those who are already in the medical marijuana business, and pay their taxes, will continue to do so if they operate a recreational marijuana store. But she said, “There's always that element” who will try to evade the tax law.

“I want the state to collect money,” she added, “but I don't want to see the taxation so high we encourage the black market. We have to participate as partners with the state so everyone wins.”

U.S. Rep. Jared Polis, D-Colo., who has called for a federal marijuana legalization bill, expects the black market to go up in smoke after pot is legalized in Colorado.

“The black market would cost more,” he said. “If some state taxed marijuana at 100 percent or 200 percent, there would be a black market, but as long as the tax is reasonable, there's no black market.”