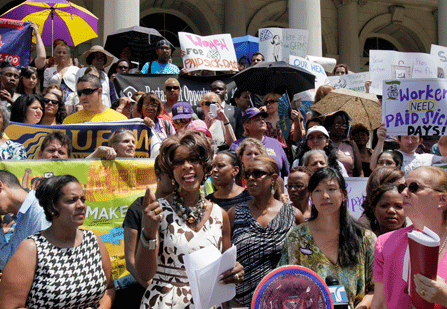 Soon there will be fewer sick New Yorkers riding the subway, serving food in restaurants, or infecting their classmates, after the New York City Council decided last week to require local businesses to give workers time off if they are ill or have to care for a sick child.

But mandatory sick leave, hailed as a progressive public health measure by its supporters, is sparking fierce opposition in several state legislatures.

Connecticut, San Francisco, Portland, Ore., Washington, D.C., and Seattle approved sick leave rules before New York City  did.  But when Milwaukee established its own requirement in 2011, Wisconsin lawmakers overturned it.  Since then, Kansas, Tennessee, Mississippi, Louisiana and Arizona have approved laws banning local sick leave ordinances. In Florida, a ban approved by lawmakers is awaiting Gov. Rick Scott's signature, and a similar measure is pending in the Michigan Legislature—even though no city in Michigan has approved a sick leave law.

State Rep. Earl Poleski, the Republican sponsor of the Michigan measure, said business leaders approached him because they wanted to get ahead of the issue.  Local governments should be free to set their own leave policies, Poleski said, but they shouldn't be allowed to set them for private-sector employers.

“A well-managed business is going to have some sort of policy that deals with the inevitable times when an employee cannot be on the job,” he said. “In this country we do not dictate to firms that they be well-managed.”

A Push for Public Health

Supporters say the new law will improve public health by keeping ill workers and schoolchildren at home. Public health concerns are particularly pronounced in the restaurant industry. A recent Centers for Disease Control study found that sick food handlers were the cause of 53 percent of norovirus outbreaks—the leading cause of foodborne illness.

But according to Bureau of Labor Statistics data, paid sick time is currently available to only 40 percent of service workers—who interact directly with the public—compared to 61 percent of the overall workforce.

“It will be a healthier city,” said New York City Council Member Gale Brewer, who sponsored the measure. “This is perhaps the most progressive legislation ever passed by the City Council.” Brewer said the law will directly benefit a million New Yorkers who currently have fewer than five paid sick days or are at risk of being fired if they take any sick time, even if it is unpaid.

But many business leaders argue that by raising their costs, such laws may prompt them to lay off workers.  When Philadelphia approved a paid leave law in March, Mayor Michael Nutter, a Democrat, vetoed the measure, citing the threat to the local economy. New York City Mayor Michael Bloomberg, an independent who has owned businesses, is also opposed to the idea, but the council approved the new law with a veto-proof majority.

Supporters believe that New York City's passage of a sick leave requirement signifies a tipping point in a campaign that had its first victory in 2006, when San Francisco voters approved a sick leave ballot measure. “What's really created momentum the last few months is a deeper sense of urgency,” said Ellen Bravo, executive director of Family Values @ Work, a national network of state and local coalitions that is pushing for the reforms nationwide. “The flu outbreak is reminding people that even if you have paid sick leave, the person who drives your bus or cooks your lunch may not.”

Bravo said positive experiences in other places that have approved a statewide sick leave law, have built a base of evidence to support extending the policy nationwide. Bravo said sick leave laws ultimately save many businesses money by reducing turnover, cutting health care costs and boosting productivity. In San Francisco, 68 percent of businesses support the law and 70 percent reported no significant impact on profitability, according to a 2011 study by the Institute for Women's Policy Research, a Washington-based think tank.

Oregon, Washington and Vermont are considering statewide sick-leave requirements, but advocates say city-based campaigns have proven to be the most promising.

In Florida, Republican Gov. Scott is still reviewing the ban approved by the legislature. Sick-leave advocates hope they can talk him into rejecting the measure. "A veto from him would be completely consistent with the governor's belief in letting local governments decide," said Stephanie Porta, executive director of Organize Now, which is leading the sick-leave campaign in the state.

The Florida legislation is a response to a fight in the Orlando area between a coalition led by Porta and major employers such as Disney World and Darden Restaurants, the parent company of Olive Garden and Red Lobster. According to Porta, Darden does not offer paid sick leave to any of its employees, and only about half of Disney's workforce has it. Disney and Darden did not respond to requests for comment.

Petitioners in Orlando gathered enough signatures to merit a slot on the November 2012 county ballot, but county commissioners delayed the process. County commissioners were caught discussing stalling tactics with lobbyists from Sea World, Disney and Darden via text message during a Sept. 11 board meeting. “There isn't a more real life example of corporations running our government,” Porta said. “They were actually telling public officials what to do during a meeting as it was happening.”

A judge has ordered the measure on the August 2014 ballot, but the issue will be moot unless Gov. Scott vetoes the bill. According to a recent poll, 80 percent of Florida voters support paid sick leave.

Michael Ketchum, vice president for public policy at the Orlando's regional chamber of commerce, said the statewide legislation banning local sick leave laws would protect businesses from the burden of navigating a patchwork of local rules, while creating a study committee to examine the merits of paid sick leave.