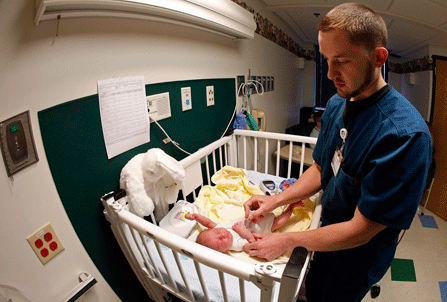 A nurse at a hospital in Knoxville, Tenn., gives medication to a baby born dependent on drugs. Attorneys general from 43 states want a new warning label alerting consumers to the dangers of prescription painkillers for unborn children. (AP)

In a letter sent Monday to the U.S. Food and Drug Administration, the attorneys general point to an alarming spike in the number of babies born with “neonatal abstinence syndrome,” or drug withdrawal symptoms experienced by babies when they are cut off from the opioid drugs ingested by their mothers. The symptoms include tremors, seizures, poor weight gain and fever.

“We believe that a ‘black box warning' for these medications would help ensure that women of childbearing age – as well as their health care providers – are aware of the serious risks associated with narcotic use during pregnancy,” the attorneys general wrote in the letter addressed to FDA Commissioner Margaret Hamburg. The targeted medications include popular painkillers such as OxyContin, Vicodin, codeine, morphine and methadone, which are part of the same opioid family of drugs as the illegal drug heroin.

Nationally, about 13,500 infants were born with drug withdrawal symptoms in 2009, about one baby each hour, according to a 2012 study from the Journal of the American Medical Association.

The problem is particularly pronounced in certain states. In Kentucky, for example, instances of neonatal abstinence syndrome have increased 2500 percent over 10 years, from 29 cases in 2001 to 730 cases in 2011, according to the attorney general's office in that state.

Babies born with neonatal abstinence syndrome require more care and risk lifelong health problems. Medicaid, a joint state-federal program, bears much of the cost: In Florida, where seven of every 1,000 infants born in 2011 experienced opioid withdrawal symptoms, Medicaid paid for treatment for 77 percent of those babies, at a total cost of about $32 million, according to a report on prescription drug abuse and newborns. The rate of opioid-exposed babies born in Florida more than tripled between 2007 and 2011, from 2.3 to 7.5 per 1,000 live births.

In Tennessee, the average cost to the state Medicaid program of a baby born with neonatal abstinence syndrome was $40,931 in 2010. That compares with $7,258 in Medicaid benefits for a healthy birth, according to the Tennessee Department of Health. The state ranked second in the country for number of retail prescriptions filled per person, at 17.6 prescriptions filled per person in 2011.

The black box labels the attorneys general are calling for are found on prescriptions which cause the most serious side effects, including anti-depressants or heart medications. The new warning labels would be added to any existing black box labels on the drugs. For instance, OxyContin already comes with a black box label warning about its potential for abuse.