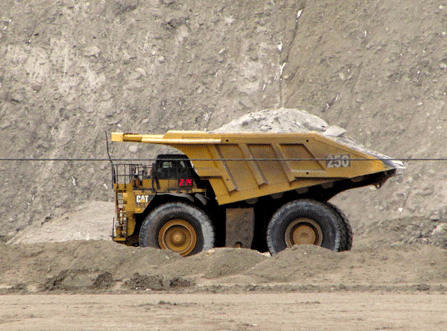 A house-sized dump truck hauls dirt and rock at the Black Thunder coal mine in northeast Wyoming's Powder River Basin, source of about 40 percent of the nation's coal. Legislation in Congress would keep 35 states from losing $110 million in mineral royalties because of sequestration. (AP)

Westerners' outrage over federal cuts to royalties paid to states for mineral development on public lands has reached the halls of Congress.

The proposals come weeks after the U.S. Department of the Interior, which currently distributes the royalties, said it plans to shave about $110 million from monthly payments to 35 states under the forced cuts. That announcement caught state lawmakers off-guard, sparking anger — particularly in Wyoming, the nation's coal king and home to large swaths of public land. The state stands to lose $53 million in a matter of months.

The cuts total $26 million in New Mexico and more than $8 million each in Utah and Colorado.

The Mineral Leasing Act requires the federal government to give states half the royalties, except   for Alaska, which nets 90 percent. States use their share for variety of programs, including public schools, community colleges, emergency response activities and basic infrastructure. Those funds totaled $2.1 billion last year, with nearly half going to Wyoming.

Wyoming Gov. Matt Mead, a Republican who recently sliced his budget amid lagging mineral revenues, said the royalties should be off-limits from sequestration, likening the cuts to theft, a comparison shared by Wyoming's congressional delegation and lawmakers in other energy states.

“The Obama Administration's decision to take revenue that belongs to Wyoming instead of cutting federal spending is outrageous. With all the waste in Washington, the Obama administration should cut its own expenses to balance the federal budget,” Enzi and Lummis said in a statement.

Interior officials said Thursday they do not comment on pending legislation. In March, the agency told Stateline it “recognizes the hardships (the cuts) may impose on states, but it is obliged to fulfill its mission in compliance with the law.”

A report from the Office of Budget and Management notes that the Obama administration “has no discretion” over how the budget is cut. “Instead, the reductions have been calculated pursuant to the requirements specified in the Budget Control Act.”

Daniel Head, Enzi's press secretary, said the senator has received “a lot of positive feedback from his colleagues on the bill and is working on getting additional support before it's introduced.”