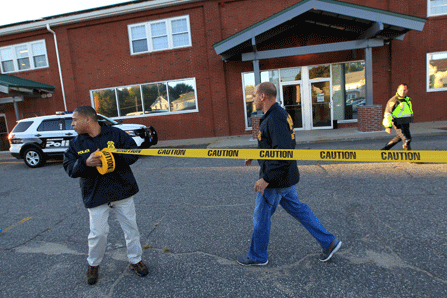 The organization representing state pharmacy regulators Thursday endorsed federal legislation that would give the Food and Drug Administration authority over large compounding pharmacies similar to the Massachusetts company whose tainted drugs last year sickened or killed 741 people in 20 states. A rare form of fungal meningitis was traced to contaminated steroids made and sold by the New England Compounding Center in Framingham.

The tragedy revealed confusion over who should have been overseeing drug compounders that produce large quantities of custom-made medicines. Drug manufacturers are regulated by the FDA, while state officials oversee pharmacies, which have long customized medicines based on individual prescriptions. But in recent years, large-scale makers of customized medicines have emerged, and they were poorly regulated by federal and state governments.

The National Association of Boards of Pharmacy Thursday supported proposed Senate legislation that would give the FDA increased oversight over the compounding industry.

"We welcome the clarifications provided by the proposed legislation to the regulatory uncertainties that currently exist and were one of the primary factors leading to the meningitis tragedy," Carmen Catizone, the group's executive director, said at a hearing of the Senate Committee on Health, Education, Labor and Pensions.

The legislation is not without its critics, including Public Citizen. The consumer organization has argued strenuously that the proposed law would enable drug compounders to produce drugs but under lesser quality standards required of conventional drug manufacturers.

“These second-tier manufacturers would be permitted to mass-produce standardized drugs and sell across state lines without obtaining FDA approval or meeting federal labeling requirements intended to ensure the safe use of drugs — requirements currently mandated for all drug manufacturers,” Public Citizen said in advance of the hearing. An earlier Stateline story related concerns about poor regulation of these manufacturers.