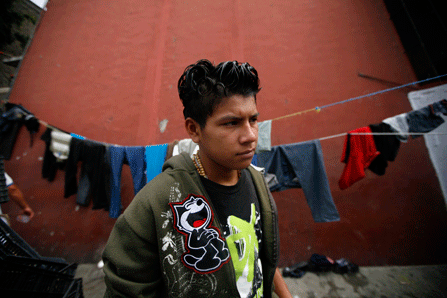 A teenager from El Salvador waits for a north bound train to continue his journey to the U.S.-Mexico border. The number of Central American children making such a journey rose dramatically last year, fueled in part by the rising violence from the spread of Mexican drug cartels. (AP)

Every day, 80 to 120 children cross the Texas border illegally — and alone.

What's happening in Texas reflects a nationwide trend: Immigration by undocumented children under 18 is on the rise, even as fewer adults come into the country illegally.

The Border Patrol apprehended 24,481 unaccompanied children in 2012, more than three times than in 2008. Of that total, federal authorities referred a record 13,625 children to another part of the federal government, called the Office of Refugee Resettlement (ORR) within the U.S. Health and Human Services. This agency is responsible for the care and custody of minor children while their immigration status is considered.

These children, most of them teenagers, are temporarily cared for by the federal government in shelters and group homes in more than a dozen states, including Texas, Illinois, Arizona, California, Florida, New York and Virginia. The federal government foots the bill, but states feel the impact. Last year, Republican Gov. Rick Perry of Texas called the surge of children crossing the border a “humanitarian crisis.”

The remaining 10,000-plus children caught at the border last year were mostly from Mexico, and many were sent home.

Most of the children who remain in U.S. custody are from Guatemala, El Salvador and Honduras. Many say they are fleeing violence from gangs and drug cartels as well as abuse, sometimes by their own family members. Others are trying to break free from poverty and get a better life in the United States, or to reunite with family members already in the states. In many cases, they crossed mountains and deserts, often relying on “coyotes,” or guides, to get to the United States.

Whatever the reason, the increase has been so dramatic that it caught the government and advocates by surprise. In a typical year, federal authorities handled between 7,000 and 8,000 unaccompanied children. The total was 13,625 in 2012. By government estimates, it could climb to nearly 24,000 within the next year.

Providing temporary shelter and support services to these children while their cases work through the labyrinth of federal immigration and legal systems isn't cheap. While most government programs are experiencing automatic across-the-board cuts under the federal sequester, this program got even more money this year. Congress gave $376 million to the Unaccompanied Alien Children program this year, more than double the $165 million in 2012.  Nearly a decade ago, the program got just $54 million.

The growing cost of the program also comes at a time when Congress is looking to revamp the country's immigration laws and states are revisiting their own policies toward immigrants.

At one point last year, the federal government used military bases in Texas to temporarily house the overflow of undocumented and unaccompanied children in its care.

Advocates say the federal government worked around the clock last year to open several emergency shelters to move these chil­dren from holding facilities operated by U.S. Customs and Border Protection to the refugee office. The temporary shelters are now gone, replaced with an additional 1,300 beds in licensed homes and facilities, primarily in Texas.

The state no longer has over-capacity issues after some existing facilities were expanded and new ones were built, said Patrick Crimmins, a spokesman for the Texas Department of Family and Protective Services.

A decade ago, the United States would have routinely tried to deport the unaccompanied children caught at the border, arguing they were violating U.S. immigration laws. New laws put in place after 9/11 gave ORR the responsibility for caring and placing these children.

The Trafficking Victims Protection Reauthorization Act of 2008 provided more protections, requiring, for example, that the federal government interview unaccompanied children caught at the border to see whether they were victims of human trafficking, if they were eligible to seek asylum and whether it was safe for them to return to their home countries.

Concerns about Children's Past Traumas

The shelters where the children are temporarily housed are more child-friendly than the federal immigration detention facilities. The kids in the shelters get to wear jeans and T-shirts, not the jumpsuits worn by many adults in federal immigration centers. Children under 12 are placed in smaller residential-type facilities. Education and medical services are provided. Their stays can range from a week to several months. The average is 50 days.

“But it's still a shelter,” said Jessica Jones with the Women's Refugee Commission. “It's not an ideal scenario.” Many shelters are not integrated into communities, lack outdoor recreation areas and many aren't equipped to deal with the traumas the children may have suffered getting to the United States. “It still feels like detention to them,” she said.

Most of the children end up staying here. ORR data show that more than 65 percent of these children from 2008 to2010 were ultimately placed with sponsors living in the United States. Sponsors ideally are family, but also included are licensed programs willing to accept legal custody of a child, such as shelters for homeless youth.  Other children returned to their home country or turned 18 and were transferred to adult immigration authorities.

About 40 percent of children admitted into ORR custody were identified as eligible for a form of legal relief, such as asylum, special immigrant juvenile status, or visas for victims of crime or trafficking.

With the increased caseload, advocates worry the government is not paying enough attention to the sponsors, to ensure that the family members or family friends can adequately take care of these children and that the environment is suitable.

Part of the process involves fingerprinting sponsors, but the federal government often lifts that requirement if the sponsor is a parent. Advocates say that in some cases, the children may not have seen their parents for years. There is also a concern that some children are being released to people who claim to be the parents but aren't.

ORR also is not required to do background checks or a “home study” that includes home visits for every sponsor, and advocates say many sponsors don't receive either.

“A sponsor is just part of the equation,” said Kristyn Peck, associate director of children's services at the U.S. Conference of Catholic Bishops. “Assessing the home environment is equally important.”

A few years ago, most of these children were placed with sponsors in California, New York and Texas, but advocates say they are seeing a shift. Besides those states, more children are ending up in the eastern corridor from Boston to New York-New Jersey and the Washington D.C. area, including the Maryland and Virginia suburbs. One theory is that these areas offer more job opportunities to family members.

Once the children are placed with sponsors, the federal government often loses track of them. The families are largely on their own to take care of the children. ORR does not give them any subsidies, and the children attend local schools.

“No one really knows what is happening to these children. When these children are released to these family members, there is very limited support for them,” said Kimberly Haynes, director of children's services for the Lutheran Immigration and Refugee Service. Haynes' organization is funding a pilot program to assess how these children fare.

“The trauma in which these kids survived to get here in tremendous,” she said.