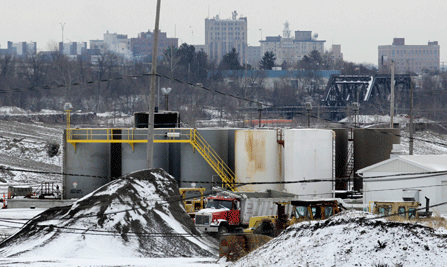 A brine injection well in Youngstown, Ohio, where wastewater from hydraulic fracturing was disposed. Coastal communities in North Carolina fear they will become dumping grounds for fracking wastewater if their state lifts a ban on deep well injections. (AP)

The Republican has sponsored sweeping legislation that would lift the state's moratorium on unconventional drilling and give the state an October 2014 deadline for crafting regulations. It sailed through the Senate in late February.

“Nothing will get done if you don't have a timeline,” Rucho said. “We believe we have a significant resource here….The upside potential is tremendous.”

How tremendous is debatable, since researchers recently slashed estimates of the size of the state's shale deposit. No one can be certain, however, until energy companies set drills whirring and high-pressured water blasting using hydraulic fracturing, the controversial technique known as fracking.

But first, lawmakers and regulators here have plenty of questions to answer, including one that has become a major sticking point: What will happen to millions of gallons of chemical-laced water left behind by drillers?

Wastewater disposal is one of many challenges facing a state with no history of oil and gas production. Even as they move toward lifting the ban, lawmakers here have been busy cobbling together regulations to protect the public and the environment.

“All these questions still have to be answered,” said Rep. Mike Hager, a Republican who chairs the Energy and Public Utilities Committee. “It's just like an onion; that's what we found out. There are so many layers to this.”

Rucho's legislation would also overturn a 40-year ban on deep injection wells, which drillers in many states use to pump chemical-laced wastewater thousands of feet below ground.

North Carolina's geology, however, would leave just one possible dumping ground: the state's Coastal Plain, a region of ocean side communities far removed from the shale.

The state's shale deposit lies miles west, in the Piedmont. But it's doubtful that region's hard bedrock could absorb the waste. Meanwhile, natural fractures in the rock would make it nearly impossible to predict where injected fluid might travel. Without other options, drillers would likely truck the waste hundreds of miles east and inject it into aquifers beneath the Coastal Plains. Those aquifers are surrounded by more absorbent layers of sands, silts and clays.

The proposal has put coastal Tar Heels on edge, stirring concerns about risks to stressed water supplies and the presence of drilling rigs and trucks hauling wastewater near beach communities. The latter could jeopardize North Carolina's $24 billion tourism industry.

“There is so little (shale) resources and so much risk,” said Kemp Burdette, executive director of nonprofit Cape Fear River Watch, which advocates for the Eastern North Carolina basin.

The angst comes as population growth, recent dry spells and the gradual seepage of salt into freshwater aquifers have put a strain on North Carolina's drinking water supply. State and local officials are considering drawing water from mildly salty coastal aquifers and converting it into drinking water. But if fracking waste ends up in those aquifers, the water there would be off limits.

“Water is the new gold…Why would we want to ruin that resource?” said Rep. Rick Catlin, a first-term Republican from Wilmington and an engineer and geologist who says he is “passionate about protecting North Carolina's aquifers.”

Catlin suggested that useable water — rather than the state's possibly meager oil and gas supply —  is more likely to attract businesses from elsewhere, particularly the drought-scorched American West, where states are squabbling over what little water they have. 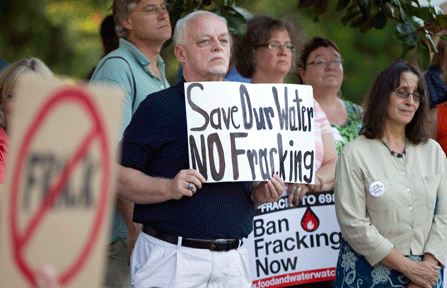 Wake County resident Marvin Woll joins others to protest fracking in North Carolina in June 2012. The state legislature is weighing whether to lift a moratorium on hydraulic fracturing. (AP)

Fracking one well requires millions of gallons of water to crack underground shale. The process also yields potentially dangerous byproducts: Brine is water heavily infused with salts and natural pollutants, and flowback is toxic water laced with dozens of chemicals, potentially including ammonia and sulfuric acid. Flowback amounted to about a third of the water left over from each fracking job in the Marcellus Formation in Ohio and Pennsylvania, according to a recent study by researchers at Kent State and Duke University.

Increasingly, drillers are finding ways to reuse or recycle the wastewater. In Pennsylvania, for instance, state regulators say drillers recycle about 70 percent of flowback, and some recycle up to 100 percent. But the recycling process also poses environmental risks: The wastewater can overwhelm some treatment plants and some dissolved salts can't be removed.

Deep injections remain the cheapest option for sending the waste out of sight and out of mind. That's why more than 30,000 Class II disposal wells — about one fifth of all injection wells used by the oil and gas industry in 32 states — pock-mark the U.S. landscape, accepting millions of gallons of waste each day.

Texas, California and Oklahoma have the most Class II wells, though other emerging energy states, including Ohio, accept growing amounts of the waste.

Whether used for production or waste disposal, the well structures are essentially the same: tubes made of concrete and steel plunge hundreds or thousands of feet below the earth's surface, opening into the rock formation where the waste settles and, regulators hope, stays.

Despite many regulators' assurances that the process is safe, the wells are not immune to problems, including leaks that have unexpectedly propelled the waste back to the surface, or sent it seeping into aquifers, including some that provide drinking water.

“The problem with injection is that when something goes wrong, it's expensive and sometimes impossible to clean up,” said Robert Jackson, an environmental scientist at Duke University.

A growing body of research has also linked deep well injections to mild earthquakes in several states. Most recently, a study by the University of Oklahoma and the U.S. Geological Survey tied a 5.7-magnitude earthquake in Oklahoma to the process.

What's more, some in North Carolina worry that overturning the injection ban would open the floodgates to out-of-state waste. That is happening in Ohio. It is running out of room after injecting about 14 billion barrels of waste last year, half of it from booming Pennsylvania, whose geology — like North Carolina's — makes deep injections difficult. Ohio can't do much to keep waste at the border because of constitutional protections for interstate commerce.

“Will we be able to limit the injections in North Carolina?” said Jackson. “Probably not.”

Sins of the Past

Deep well injections have long been banned in North Carolina, largely because of the carelessness of a materials manufacturer in the 1960s and 1970s.

For more than four years beginning in May 1968, Hercules, Inc. injected toxic acid used to make polyester fibers into poorly constructed wells that plunged 1,000 feet below the surface into what is now the Cape Fear Aquifer.

The waste, injected at pressures up to 200 gallons of waste per minute — and without a pumping test that would have indicated how the fluid would react with the geology — leached into another aquifer. That water has not been tapped for drinking, but it could be if it were treated.

Four decades later, some of that waste is still around, buried below a reeking industrial complex four miles northwest of Wilmington. The episode factors prominently in debates here about wells that could handle similar amounts of waste.

“The technology is somewhat better than it was 40 years ago, but not radically different,” said Jackson.

There is little, if any, question that North Carolina's GOP-controlled legislature and its new Republican governor will eventually lift the state's fracking moratorium. However, overturning the injection ban looks increasingly less likely.

Hager, the Energy and Public Utilities Committee chair, predicts the wastewater provision will be removed from the bill. And Catlin, vice-chair of the Environment committee, said he would thwart the measure if it comes before him.

Meanwhile, members of the state's Mining and Energy Commission, a team of experts assembled last year to draft regulations, are pushing other disposal methods, such as reuse and recycling.

Rucho, the senator who proposed to lift the ban, is not vigorously defending it “If the geology doesn't accept it, and the process isn't acceptable, don't do it,” he said. “The last thing you want is an elected official making those decisions.”

By keeping the cheapest disposal option off the table, however, North Carolina could scare off energy companies, especially since researchers have downgraded expectations for the state's shale. Last year, the U.S. Geological Survey said the resource, once thought to equal 40 years of North Carolina's natural gas demand, is more likely equal to a five-year supply.

The energy company Halliburton, which has been in talks with state officials considering fracking regulations, did not respond questions about how the wastewater issue might impact its business decisions.

Rucho is holding out that North Carolina's resource is larger than the most recent predictions, knowing that initial estimates can be rough and often change.