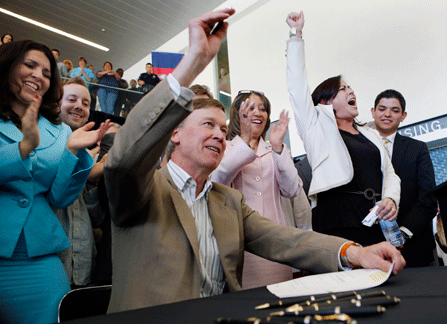 Colorado Gov. John Hickenlooper, a Democrat, celebrates after signing a bill granting in-state tuition for students in the country illegally who graduate from Colorado high schools. Colorado is one of several states to pass immigrant-friendly laws this year. (AP Photo/Ed Andrieski)

States this year are passing a slew of immigrant-friendly laws, a major change from the strict enforcement measures Arizona and other states approved just a few years ago.

The November elections that put immigration back on Congress' agenda also prompted the shift at the state level. Pro-immigrant measures that had been stalled for years got new life this spring, while courts have thwarted state efforts to crack down on illegal immigration.

The pro-immigrant surge has been a “radical departure” from recent trends, said Alvin Melathe, an immigration expert for the Progressive States Network, which favors immigrant rights.

“There's no question in my mind that the people who want the law enforced are on the defensive,” said Steven Camarota at the Center for Immigration Studies, which wants to reduce immigration.

With the exception of Colorado, individual states are not reversing themselves, Camarota said. Instead, traditionally immigrant-friendly states are taking bolder action while states that have pushed for greater enforcement are on the sidelines.

Most of the victories for immigrant advocates deal with either in-state tuition or driver's licenses for people in the country illegally.

Colorado and Oregon, where Democrats took full control of legislatures this year, have been particularly active.

The number of states that will issue driver's licenses to immigrants in the country illegally has doubled since January, going from three to six. Illinois, Maryland and Oregon approved the changes this year, and advocates say a dozen other states from Nevada to Connecticut, plus the District of Columbia, are considering similar moves.

That is a break from years past, when state after state decided to stop granting licenses to people in the country illegally, often in response to the federal Real ID law designed to combat terrorism.

In New Mexico, one of the few states that never stopped issuing the licenses, Republican Gov. Susana Martinez was thwarted yet again this year in her efforts to end the practice.

Martinez campaigned on the issue when she was elected in 2010, but she has not been able to convince the Democratic legislature to make the change. This year, she warned that New Mexicans would not be able to board planes with their driver's licenses, but the federal government announced in January that it would delay enforcement of the 2005 Real ID law yet again.

Maryland became one of the last states to bar unauthorized immigrants from getting driver's licenses in 2009, although that law still allowed 95,000 who had licenses to keep them for six years. But lawmakers reversed course this year and agreed to let immigrants get the licenses again next January.

Both this year's law and the 2009 version reflected the prevailing mood toward immigration nationally, said Kim Propeack, political director for Casa de Maryland, an immigrants group. “Across the country, the years between 2001 and 2009 were the most anti-immigrant in state legislatures in recent history,” she said.

But Propeack thinks the tide has turned. “We're not so much setting a trend as riding a wave,” she said.

The game has certainly changed in Colorado, said Rich Jones, the director of policy and research at the Bell Policy Center in Denver, which supported the in-state tuition law there.

The votes largely fell along party lines, but the tenor of the debate has changed too, Jones said. Two years ago, the number of witnesses who testified on the in-state tuition bill was split roughly in half. This year, Jones said, very few opponents showed up. “Either the anti-immigration side ran out of gas or there are fewer of them,” he said.

The shift at the state level is especially striking as the U.S. Senate starts work this week on a compromise proposal to overhaul the country's immigration laws. The federal bill from the “Gang of Eight” senators would both beef up immigration enforcement and allow people in the country illegally to stay legally, if they meet certain conditions.

Such compromise efforts are rare in state capitols, which tend to be more politically homogenous than Congress. Utah is the lone exception in recent years. It passed a law in 2010 that included stronger enforcement measures but also attempted to create a guest worker program.

The federal government always looms large in state immigration debates, and it had a major role in this year's swing toward immigrant rights.

Last summer, the U.S. Supreme Court  scaled back an Arizona immigration law that served as a model for several states, particularly in the South, to encourage immigrants who were not in the country illegally to move away.

President Barack Obama's decision to allow certain young immigrants to stay in the country without fear of deportation also changed the political landscape. Under the move, known as Deferred Action for Childhood Arrivals (DACA), immigrant students or graduates can get Social Security cards and permission to work in the United States.

In Colorado, that eliminated one of the major arguments that opponents used against in-state tuition—that in-state tuition gave students “false hope” because they would not be able to get a job after graduation, Jones said.

It also reframed the debate about driver's licenses. Most states, including many that have pushed for greater immigration enforcement, started giving driver's licenses to immigrants who qualified for DACA, because they had all the necessary paperwork to get the licenses.