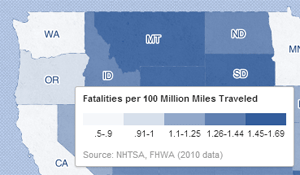 The number of people who died in traffic accidents inched up last year, reversing a downward trend in road deaths that began in 2006, according to a federal report.

Road deaths increased 5.3 percent last year, up to a total of 34,080, according to early estimates  from the National Highway Traffic Safety Administration.

“It is too soon to speculate” on why the numbers climbed, the agency said. “It should be noted that the historic downward trend in traffic fatalities in the past several years means any comparison will be to an unprecedented low baseline figure,” it added.

The New England region had the greatest rise in traffic deaths, with more than a15 percent increase. A tier of states mostly in the Southwest (but also including Hawaii, Louisiana and Mississippi) also saw significant increases. The preliminary report did not contain state-by-state figures.

Federal researchers estimated Americans drove 9.1 billion more miles last year than in 2011, but that is only an increase of 0.3 percent.