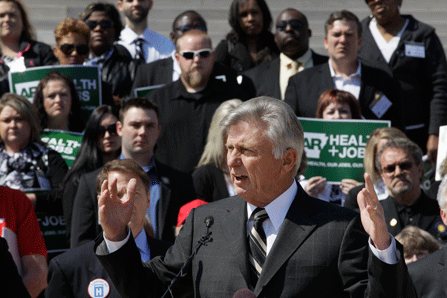 Arkansas Gov. Mike Beebe promotes Medicaid expansion at a rally at the Arkansas state capitol in March. The Obama Administration has given tentative approval to the state's premium assistance Medicaid expansion plan, which has drawn interest from other states. (AP)

The Obama administration appears ready to allow Arkansas — and a handful of other states — to pursue a market-based approach to fund health care for the poor in place of conventional Medicaid expansion under the new federal health care law.

An announcement from the U.S. Dept. of Health and Human Services spells out exactly what states need to do to qualify.

Called “premium assistance,” the alternative plan would allow states to use federal Medicaid money to buy private insurance for low-income people from new state or federal health insurance exchanges created under the Affordable Care Act. HHS said it would “consider approving a limited number of premium assistance demonstrations” as a way to test how well they work in the real world.

States would have to file for a waiver of existing Medicaid rules, and state and federal public hearings would be required. The biggest hurdle for states is making sure the private insurance option would not cost more than traditional Medicaid.

Ever since the U.S. Supreme Court made the expansion optional nearly a year ago, states have proposed various alternatives to expanding traditional Medicaid. The administration appears eager to let states find their own way to provide health care coverage for low-income uninsured Americans that won't cost more than Medicaid.

Medicaid Expansion by the Numbers

Arkansas has passed its own version of Medicaid expansion and Ohio may pass a similar plan championed by the governor. A look at how many stand to benefit.

Developed by Democratic Gov. Mike Beebe of Arkansas, the private insurance model is the only alternative so far that seems to have the federal government's blessing, with its free-market appeal to health law critics.

Beebe had always wanted to expand Medicaid, but Republican lawmakers in his state refused. They told him they would consider only a market-based approach to covering low-income Arkansans.

The Arkansas plan would provide private insurance to all newly eligible adults, except for those with special medical needs, such as multiple chronic illnesses who would remain in the conventional Medicaid program.

Ohio is closest to adopting a similar premium assistance option, but so far, lawmakers have not approved the governor's proposal. Instead, a legislative commission is reviewing the plan along with other options for “reforming” and possibly expanding Medicaid.

In at least five other states — Florida, Louisiana, Montana, Tennessee and Texas — Republican lawmakers are also considering the option. But as legislative sessions enter their final days in most states, it is unclear whether lawmakers in Ohio or any of the other states considering the premium assistance option will approve it.

Originally conceived as a way around conservative state lawmakers who refused to accept the Medicaid expansion, the idea may have benefits beyond politics:

Starting Jan. 1, individuals and families with incomes up to 138 percent of the federal poverty level ($15,856 for an individual) will be eligible for Medicaid in every state that chooses to expand under the federal Affordable Care Act. If all states were to expand Medicaid, the estimated number of new beneficiaries would be 17 million.

Millions more uninsured people with incomes between the poverty line ($11,490 for individuals) and four times that level ($45,960 for individuals) will be eligible for federal tax credits to offset the cost of purchasing private insurance on the exchange.

Currently, 16 states plus the District of Columbia have approved the expansion or are headed in that direction, 27 have rejected it, or are about to, and seven states could still go either way.

HHS appears to agree. In its announcement, the agency suggested that states might be more successful in providing premium assistance if they target people with incomes between the poverty level and 138 percent of the poverty level.

Officials in both Arkansas and Ohio say they do not expect the premium assistance route to cost the federal government significantly more than traditional Medicaid over the long term.

The Congressional Budget Office estimated that providing Medicaid coverage to the newly insured would cost about $6,000 per year per person, while health insurance purchased on the exchange would cost about $9,000 per person. Private insurers traditionally pay health care providers much more than Medicaid does.

Experts say, however, that the costs of private insurance and Medicaid are likely to converge over time. Insurance companies interested in competing for newly eligible Medicaid beneficiaries and for low-income people purchasing policies on the exchange may be willing to lower their prices.

At the same time, adding millions of people to the Medicaid program is likely to force states to increase the rates they pay health care providers to convince more doctors, dentists, pharmacists and hospitals to serve the new patients.

In its announcement, HHS invited states to offset any cost increases with savings that may come when people can more easily move from Medicaid to subsidized insurance on the exchange. The agency also told states that increased competition in exchanges would occur because of the newly eligible enrollees, and that could result in lower prices.

HHS is requiring states to provide the new beneficiaries a choice of at least two qualified health plans. One national insurance company that manages Medicaid managed care programs in other states has already said it would like to participate in Arkansas' Medicaid expansion, according to a report by Kaiser Health News. “We are very capable of doing an Arkansas-type model,” Centene Corp. CEO Michael Neidorff said. “That's something that would be a sweet spot for us.”