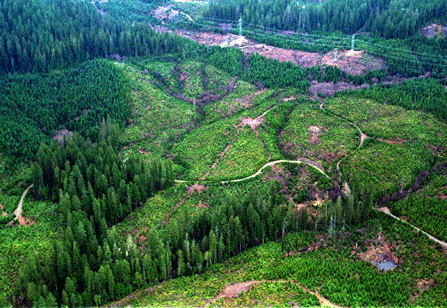 Logging roads wind through Mt. Hood National Forest in Oregon. The Forest Service is trying to claw back funds from the states to satisfy its required sequestration cuts. (AP)

With wildfires roaring in California, it might not seem an auspicious time for the U.S. Forest Service to ask a dozen states – including the Golden State – to return $17.9 million in federal revenue-sharing funds. But that's just what the agency has done, citing sequestration budget cuts.

Forest Service Chief Thomas Tidwell, in letters to the governors of the states involved, noted that sequestration requires a 5.1 percent cut across the board in 2013, saying that his agency “has no alternative” but to ask for the money back.

Not so fast, say advocates for the states, including members of the U.S. House and Senate. They argue that sequestration does not apply to the funds, which were generated in 2012 but distributed in 2013.

"The state's on fire, it couldn't come at a worse time," said Paul A. Smith, senior legislative advocate for the Rural County Representatives of California.

The issue involves a program called “county payments,” a federal-state revenue sharing plan started during President Theodore Roosevelt's day. Counties and states receive a quarter of the revenue from timber sold on federal land, to be used for state roads, schools and emergency services.

For California, now battling a wildfire in Ventura County that has burned more than 10,000 acres, the amount requested to be returned amounts to nearly $2 million. In a sampling of other states:

In a letter to Tidwell, Sens. Ron Wyden, D-Ore., and Lisa Murkowski, R-Alaska, chairman and ranking member of the U.S. Senate Energy and Natural Resources Committee, said the agency should reconsider. “We urge you to take immediate action to mitigate the impacts of the sequester on the states and counties,” the senators wrote.

The senators were even more outraged at a plan, expressed by Tidwell at a recent congressional hearing, to charge interest and penalties on the money if the states do not pay up.

“This is unacceptable,” they wrote, saying the sequestration law does not call for penalties and interest on budget cuts.

Wyden's spokesman, Keith Chu, said the senator believes the request for interest and penalties is “beyond the pale.”