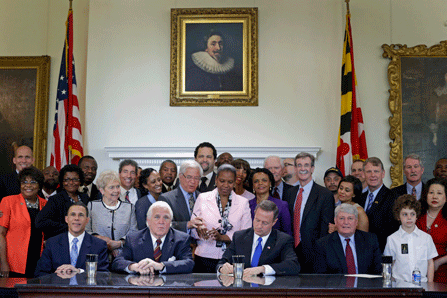 Maryland Gov. Martin O'Malley signs a bill repealing the death penalty in his state. Maryland is the sixth state in six years to do away with the punishment. (AP)

Maryland officially became the sixth state in six years to repeal the death penalty Thursday. Gov. Martin O'Malley signed the repeal bill, checking off a major legislative priority in what he called, “the most productive legislative session in modern memory.”

“We have a responsibility to stop doing the things that are wasteful and ineffective,” O'Malley said at the bill signing, referring to his view that the death penalty does not deter violent crime.

O'Malley, a Democrat, signed the bill surrounded by supporters, including NAACP President Benjamin Jealous and Kirk Bloodsworth, who was exonerated from Maryland's death row in 1993 after DNA analysis showed he was not guilty of murdering a young girl.

O'Malley still must decide what to do with the five men remaining on the state's death row. As Stateline has previously reported, the repeal bill makes no provision for the five men sentenced to death. Despite the repeal of the death penalty, they still could legally be executed.

Maryland's legislative session is over, but death penalty debates are continuing in other states across the country. In Delaware, a death penalty repeal bill stalled earlier this week in a House committee, after passing the state Senate 11-10 earlier this year.

In Connecticut, where the death penalty was repealed last year, the state Supreme Court began to hear execution appeals last week from the 11 inmates who were left on the state's death row when the repeal bill became law. The court will determine if it is still legal to execute the inmates, even though the punishment no longer exists as an option for future offenders. What the Connecticut court decides will have great implications for the five men remaining on Maryland's death row.

On the other end of the spectrum, Florida lawmakers passed a bill earlier this month to speed up the execution process in that state. The bill, which is pending before Republican Gov. Rick Scott, requires the governor to sign a death warrant within 30 days after a final state Supreme Court review of the case, and mandates that the execution take place within 180 days after that.

Overall, however, the use of the death penalty is trending downwards. “The death penalty is viewed as a net cost even when you're not having executions,” said Richard Dieter, executive director of the Death Penalty Information Center, in an interview earlier this year with Stateline. “You also have the underlying fear that you might make a mistake and execute an innocent person. Since it's not even being used, many see it as an outmoded or outdated program that is draining resources.” 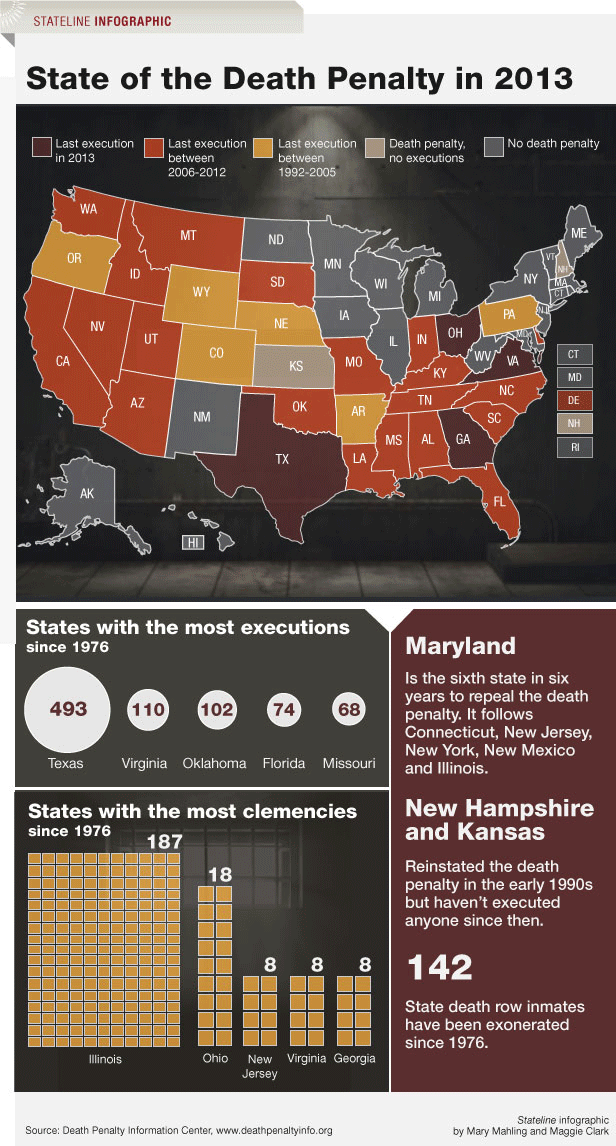