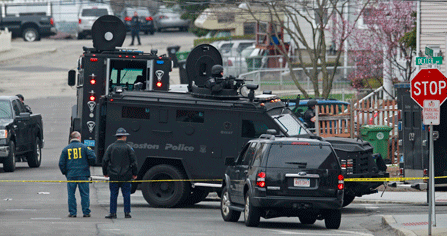 Police and federal officers drive through a neighborhood while searching for a suspect in the Boston Marathon bombings. Police, lawmakers and advocates are questioning whether police drones could have found the suspects faster. (AP)

Even if police drones weren't used in the manhunt for the Boston Marathon suspects, drones have become central to the post-bombing discussion of surveillance techniques. Boston Police Chief Edward F. Davis said he wants to use drones at next year's Boston Marathon, calling them “a good idea.”

Using a drone to pursue fleeing suspects like the Tsarnaev brothers would be legal under both state and federal law. But pre-emptively hovering drones over an event still makes many uncomfortable. Lawmakers in Florida, Virginia and Idaho already prohibit that kind of drone surveillance at events, and more are debating it.

“Every state bill would allow a drone in a manhunt or chase,” said Ben Wizner, director of the Speech, Privacy and Technology Project at the American Civil Liberties Union, “and there's no question that law enforcement would have had probable cause to use drones in pursuit (of the Boston suspects). But states have decided that they don't want that kind of constant-surveillance-use of drones at events, where everything is recorded.”

Despite the call for more surveillance cameras after the successful identification of the Boston suspects using video footage, opposition to police use of drones in Massachusetts is moving ahead. Republican Sen. Robert Hedlund, who is sponsoring a bill to regulate law enforcement use of drones in Massachusetts, wants to require warrants before police can use drones and place restrictions on how video footage collected from drones can be retained.

“My opinions about drone use haven't changed since the bombings,” said Hedlund, who remains skeptical of any drone surveillance.

Florida lawmakers also balked at the idea of using drones for crowd control earlier this year. After an Orlando-area sheriff suggested at a state Senate committee hearing that drones could be useful in crowd surveillance at big events, like college football games or parades, lawmakers recoiled with references to Big Brother.

Still, use of an unmanned aircraft could have helped first-responders even more effectively assess the immediate threats following the explosions on April 15, said Mario Mairena, government relations manager for the Association for Unmanned Vehicle Systems International, which represents the industry. Hedlund's bill, like the 30-plus other state bills making their way through the legislative process, would not prohibit drone use in emergencies like the one at the finish line of the Boston Marathon.

The response to the bombings is an important test case in the discussion surrounding domestic surveillance, said Ryan Calo, a law professor at the University of Washington.

“I don't think (the Boston bombing) will reframe the surveillance debate, and people will persist in their skepticism (of drones) even after this event,” Calo said. “If attitudes about drones change, it will be over time, probably because of non-surveillance uses of drones that people get accustomed to, like in agriculture, or by hobbyists. That's the way people are going to get acclimated to drones, not from police use.”

For all the discussion in statehouses, few police departments actually have drones that they can deploy, even in a crisis. As Stateline has previously reported, nine law enforcement agencies in six states use drones, and nine other agencies have applied to the Federal Aviation Administration to use drones in the future. According to the ACLU, at least 37 states have debated drone-related legislation this year.

In Massachusetts, Hedlund and eight other state lawmakers are sponsoring a bill that would limit how law enforcement could use drones, in preparation for a time when police agencies in the state actually have them. According to FAA records, no Massachusetts police agencies have applied to the FAA for permission to use a drone or been approved to use one.

The Massachusetts bill, like legislation nationwide, would require police to obtain a search warrant for any surveillance. Police could use drones to respond to an attack or a national security emergency, which likely would have included searching for the suspects in the Boston bombings.

In addition to state laws, police are bound by strict guidelines for drone use set by the FAA, which requires police agencies to get permission from the FAA before sending a drone into the sky to avoid hitting any other aircraft that might be in the same airspace. Police can only fly the drone within the line of sight of the operator, which essentially turns the drone into a remote-control plane with a camera on board. Additionally, the drone can only go as high as 400 feet and must weigh less than 25 pounds, which means that it can only stay in the air between 30 and 90 minutes.

For practical purposes, this means driving the drone to the scene, using it, taking it down and driving it away. Under these guidelines, said Stephen Ingley, executive director of the Airborne Law Enforcement Association, “You're not going to be able follow someone for 10 miles. The (drone) would be able to do short surveillance before an event, maybe survey the crowd, and once an exigent event happened, the system would be up in the air…providing a different vantage point.”

Despite those limits from the FAA, state lawmakers in Florida and Idaho have enacted laws requiring a warrant before police can use drones, and Virginia enacted a two-year moratorium on any law enforcement use of drones. In all three states, however, lawmakers carved out exceptions for circumstances such as threats to national security or imminent danger.

Privacy advocates acknowledge that in situations like the Boston Marathon bombings, drones can be even more useful than fixed surveillance cameras to quickly scan the entire area for evidence. Concerns pop up, however, when it comes to how the video collected from these cameras is organized and stored.

For instance, said Wizner of the ACLU, there are very graphic images of crime victims in the security-camera-collected footage, which under current federal policies will probably be retained indefinitely. Should the Massachusetts bill become law, any video footage collected from police drones that was not within the scope of a warrant would have to be deleted 24 hours after the collection of the video.

“Being a victim should not land you in a government database forever,” said Wizner.

In the near term, despite the calls for drones from Boston's police chief, big investments in more surveillance do not seem likely for Massachusetts. “I don't think there is a clamor for new or more extensive surveillance,” said Gavi Wolfe, legislative counsel for the ACLU of Massachusetts. “People are talking about standing up for freedom in the face of terror, and a rush to increase surveillance would run counter to that.”

Federal grants to states for emergency preparedness and homeland security are also at an all-time low. In Massachusetts, funding from the state homeland security grant program is down 76 percent over the last five years, as Stateline has previously reported.