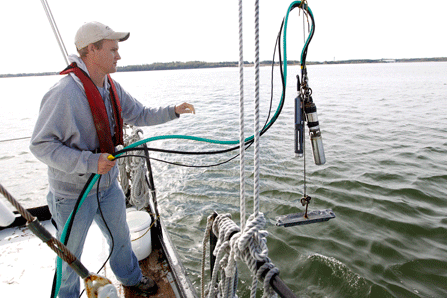 Hurricane Sandy added a dirty insult to injury when it churned up the East Coast. On top of death and destruction, the storm surge overwhelmed treatment plants and spewed billions of gallons of sewage into waters and streets.

Researchers estimate the wastewater spillage at almost 11 billion gallons. That's more than 50 times the size of the Deepwater Horizon oil spill, or enough to spread across Central Park 41 feet deep.

Almost 3.5 billion gallons of the wastewater were completely raw sewage. The rest was partially treated, but not up to health standards, according to a report released Tuesday by Climate Central, a non-profit group that researches climate issues.

“We learned just how vulnerable our wastewater systems are to climate change,” said Alyson Kenward, a co-author of the report, which analyzed data from state agencies and treatment plant operators.

Problems at treatment plants are hardly new; New York State, for instance estimates a quarter of its 610 facilities are operating past their lifespans and are in need of $36 billion in upgrades over the next two decades. That money has gotten harder to come by as federal Clean Water grants have been slashed in recent years.

But Sandy's quick and powerful surge created an unprecedented challenge for plant operators, shutting off electricity and inundating motors and other equipment.

“We haven't seen a large single instance of this magnitude before,” Kenward said.

New York (5.2 billion gallons) and New Jersey (5.1 billion) gallons bore the brunt of a problem that threatened public health, as well as local fish and shellfish populations. Those states, where most treatment plants are along the coastline, saw about 93 percent of the Sandy-related overflows, according to the report. More than 4 percent of the filth flowed from Washington, D.C.

The estimates don't include the millions more gallons of sewage that flowed directly from combined sewers, mostly old systems— many dating back to the nineteenth century — where domestic waste and storm water run through the same pipes. New York and New Jersey have the nation's highest concentration of combined sewage systems. Nationwide, those systems discharge about 850 billion gallons of waste each year, the U.S. Environmental Protection Agency estimates.

Though quick action from some plant operators and public officials likely kept even more sewage from flowing, researchers said, Sandy underscored the need for hardier infrastructure and updated practices, efforts that carry a large pricetag. They say the issue is particularly pressing as climate change makes extreme weather more frequent  and sea level rise increases the likelihood — and damage — of coastal flooding.

“In the long run, sea level rise is going to force us to rework our infrastructure physically, if we're going to keep it intact,” said Ben Strauss, another Climate Central researcher.