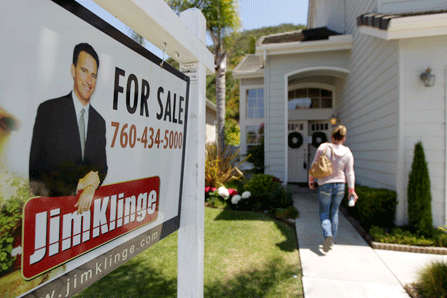 The percentage of tax filers who take the mortgage interest deduction varies widely across states, with California, shown here, among the highest. States with lowest claim rates are mostly in the South. (AP Photo/Gregory Bull, File)

The mortgage interest deduction, widely viewed as a tax break for a broad slice of middle-class America, benefits the residents of some states far more than others, according to a new report by the Pew Charitable Trusts.

The number of filers who take the deduction, and the amounts they claim, vary widely. The percentage of tax filers deducting mortgage interest in 2010 ranged from a high of nearly 37 percent in Maryland to a low of 15 percent in West Virginia and North Dakota, according to Pew's report, The Geographic Distribution of the Mortgage Interest Deduction. (Stateline is also funded by the Pew Charitable Trusts).

Nationwide, less than one-half of homeowners claim the deduction, which generally allows tax filers who own a home and itemize their deductions to subtract interest paid on mortgage debt from their gross income.

The report comes as Congress considers an overhaul of the tax code to balance the budget. Tax filers deducted nearly $360 billion in mortgage interest in 2010 at a cost of roughly $72 billion in federal income tax revenue, Pew said.

“Looking at who benefits by state should inform federal policymakers as they consider options for changing or eliminating tax expenditures over the next several years,” Pew's Anne Stauffer, an expert on federal and state fiscal policy, said in a statement.

California had the most tax filers in the country in 2010, at 16.7 million, as well as the highest number of claims, at 4.6 million.  New York, Florida, and Texas—all top five states in terms of the number of tax filers—were also at the top of the list or total deductions in dollars claimed, Pew said.

The variation across metropolitan areas within states is even greater. In Texas, for example, the state's highest claim rate—in the Austin area—is four times larger than the lowest rate, in the Odessa area, according to the report.