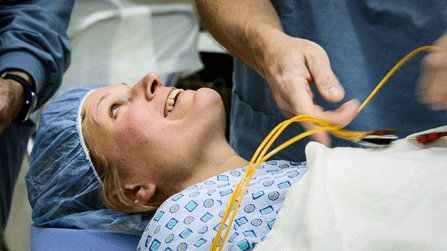 Woman about to go into surgery at Rainbow Babies and Children's Hospital in Cleveland. Gov. John Kasich, a Republican, supports an expansion of Medicaid, but he does not yet have the legislature's support. (AP)

When the Affordable Care Act was written, its authors assumed that Medicaid — the federal-state health care plan for the poor — would be expanded to low-income adults in every state.

But the U.S. Supreme Court's decision in July 2012 largely upholding the law made the expansion optional. Since then, governors in nearly half of all states have refused to take it up.

As a result, small businesses in states that choose not to expand could be liable for billions in federal tax penalties that companies in states that expand Medicaid will not have to pay. “We're strongly advocating that businesses in non-expansion states not be punished,” said Kevin Kuhlman, legislative affairs manager for the National Federation of Independent Businesses.

In the Washington, D.C. area, for example, Kuhlman said his organization wants to make sure that businesses on the Maryland side of the line are treated no differently than those on the Virginia side. Maryland Gov. Martin O'Malley, a Democrat, has approved the expansion, while Virginia governor Bob McDonnell, a Republican, has rejected it.

Under the Medicaid expansion, all adults with incomes up to 138 percent of the federal poverty level (about $15,850 for an individual or $32,500 for a family of four) will be eligible for Medicaid coverage — but only in states take up the option. Without the expansion, states are required to cover only pregnant women, children and people with disabilities, according to pre-ACA federal law.

To induce small businesses to provide insurance for their employees rather than relying on federal tax subsidies, the law requires companies with 50 or more employees to pay what is known as a “shared responsibility” fine of $3,000 for each worker who receives a federal tax subsidy because they were not offered an employer-subsidized plan. But no such penalty applies to employees whose incomes are low enough to be eligible for Medicaid.

In states that choose not to expand Medicaid, small businesses may be liable for substantial penalties they would not have had to pay if the expansion had remained mandatory, according to a recent analysis by Brian Haile of Jackson Hewitt Tax Service. Based on actuarial estimates of the number of low-income workers who would have qualified for Medicaid in the 22 states that so far have said they will not expand, Haile estimated that small businesses could be liable for as much as $1.3 billion in penalties each year. In Texas alone, the penalties could amount to as much as $448 million each year, Haile wrote.

The National Federation of Independent Business is asking the IRS to exempt small businesses from those fines. “A business should not face expensive penalties for state and regulatory decisions beyond their control,” the group wrote in a March 18 statement to the IRS. Without an exemption, “increased penalty liability could cause a more rapid erosion of employer-sponsored health insurance and increased costs to federal taxpayers,” the group wrote.