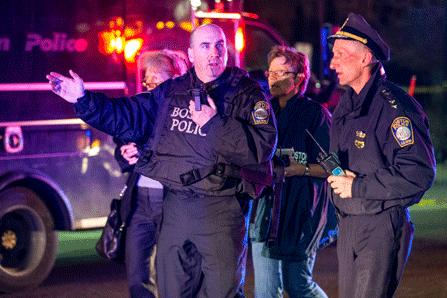 Police on the scene after a reported shootout in Cambridge. The manhunt that followed the Boston Marathon bombings required law enforcement agencies from multiple states and all levels of government to communicate with one another. (Getty)

As law enforcement desperately hunted the Boston Marathon bombing suspects, the city's reliance on commercial cellular wireless carriers became an escalating problem. Just like runners who had trouble reconnecting with their families, the city experienced major crashes in the aftermath of the deadly bombing.

"I called Comcast and asked them to open up the Xfinity Wi-Fi in Watertown," Boston Chief Information Officer Donald Denning said in an interview with Stateline.

The massive investigation demonstrated how first responders need to be able to securely share high volumes of data with partners in other law enforcement agencies. Denning said the city's reliance on the capacity of commercial carriers reinforced the need for a dedicated national public safety broadband network that is now in its planning stage.

In comments that proved to be tragically prescient, the City of Boston offered advice to the builders of this national public safety broadband network in late 2012. “Time is of the essence,” it told FirstNet, the independent authority that will design, build and operate the network.

After the marathon bombings that killed three and injured more than 200, every layer of law enforcement scrambled to coordinate. Upgrades to communications technology in the years following the Sept. 11 attacks allowed for reliable voice contact among first responders. But problems emerged when they tried to quickly share data—including the videos that ultimately led to the apprehension of the Tsarnaev brothers.

Extensive disaster planning and standard police radios known as “land mobile radios” provided reliable service and more seamless voice communication between federal, state and local officials than would have been possible in many areas of the country.

“They had in place the means and governance to integrate the federal responders as the investigation moved forward and revved up,” Suzanne Spaulding, deputy undersecretary of the U.S. Department of Homeland Security, told FirstNet's board April 23.

Still, Spaulding acknowledged there were other communications failures during the response to the bombings. “Significant problems really arose … with that essential delivery of big data packages, particularly the videos that proved to be so significant and important in the resolution of this event.” She said the challenges experienced in Boston are precisely the issues FirstNet is supposed to address.

In 2008, Boston applied for a waiver from the Federal Communications Commission (FCC) to build a dedicated citywide public safety network. It received the waiver in 2010, but has not been able to secure funding to build it, Denning said.

“We needed it then and we need it now,” Denning, the Boston CIO, said. “Broadband data five years ago would not have been in as high demand at the bombing scene as it was today, and we're only going to need more and more capacity.”

FirstNet board members said watching the Boston tragedy unfold has strengthened their resolve to complete an enormous task.

“What I was thinking about when I was looking at the TV coverage of Boston was, we made the right decision,” said Sam Ginn, FirstNet chairman and a telecommunications executive. “We're going put in place an infrastructure that's going to allow video transmission, that's going to allow downloads of camera information, downloads of pictures of people, all kind of things that I think will benefit public safety in an emergency situation.” 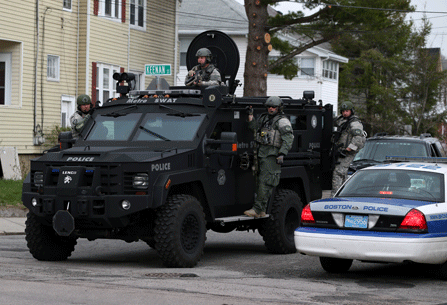 SWAT teams hunted for a suspect in the terrorist bombing of the 117th Boston Marathon. Watertown, Mass., was on lockdown following a chase and shootout. (Jonathan Wiggs/The Boston Globe via Getty Images)

The idea for this network is to leverage the collective buying power of law enforcement and first responders across the country to build a cost-effective system to share information ranging from voice conversations to high-definition videos and data with minimal fear of security breaches or network failures. It will be the largest network of its kind in the world, serving 60,000 federal, state, local and tribal public safety agencies.

Congress approved $7 billion in February 2012 to build the network and reallocated 20 megahertz of spectrum airwave capacity for it. A national network moves away from the longstanding “network of networks” approach to communications that made it difficult for first responders to communicate with one another in the aftermath of the Sept. 11 attacks. The legislation gives FirstNet broad powers as the sole licensee of the network.

An independent authority within the Department of Commerce, FirstNet is still in its infancy and just announced a general manager at its April meeting. Already it is grappling with difficult questions and facing criticism as it juggles the needs of its users.

The $7 billion is less than half of the $15 billion the FCC estimates the network will cost. To succeed, the network ultimately has to be affordable for state and local users, who will pay for operations and maintenance. “We're very conscious that if we don't have the right price point, the network will not be successful,” FirstNet Board member Teri Takai told Stateline.

But state and local governments will also have to continue paying for their existing “land mobile radio” systems until broadband-based voice functions have been fully developed and proven reliable. According to a February 2012 Government Accountability Office report, that may take a decade or more.

At a recent hearing by the House Energy and Commerce Subcommittee on Communications and Technology, Ginn assured Rep. John Dingell, D-Mich., that the network will be affordable for states; withstand power surges, terrorist attacks and natural disasters; and accommodate secure heavy use.

Rep. Joe Barton, a Texas Republican and skeptic, told Ginn, “The only question (Dingell) didn't ask was, 'When FirstNet is fully operational, will it have a direct line to heaven without a long-distance call?' If you do everything you say you're going to do, this is going to be a phenomenal network.”

Much of the early criticism of FirstNet has focused on whether the needs of states are being adequately considered. States can have FirstNet build and operate the network on their behalf, or opt out and build and operate their portion of the national network while meeting the federal standards. The Department of Commerce's National Telecommunications & Information Administration will give states $135 million in grants by mid-July to assess their needs and provide data to FirstNet.

The National Governors Association, which lobbied for the network, is pushing for greater state representation on the board, which includes no current state officials. “FirstNet must view states as partners in this endeavor,” NGA wrote to Congress. NGA has a representative on the public safety advisory committee and chairs a subcommittee dedicated to state, local and tribal concerns.

NGA and FirstNet will co-host six regional meetings for state stakeholders in May and June to discuss the work to date and states' requirements, priorities and concerns. FirstNet is also planning to visit all 50 states.

Some state and local government officials are concerned their participation is too late in the process to have much impact. “This network is being designed before any of the consultation … has been done,” Chris McIntosh, statewide interoperability coordinator for Virginia, said in the oversight hearing.

“Whose Network Is This?”

Fissures were on full display at the April 23 board meeting even as the Boston tragedy generated a renewed sense of purpose. Paul Fitzgerald, a FirstNet board member and sheriff of Story County, Iowa, presented a resolution criticizing much of the board's work and calling for an independent review and more public safety input.

He complained that even as a board member, he has not had access to network plans that have been developed by consultants and those on the board with industry backgrounds, excluding the network's ultimate users. “Why is everyone sitting quietly while the commercial members of this board tell public safety to sit in the corner and watch them work?” he said. “Whose network is this, anyways, folks?”

Fitzgerald is one of four public safety representatives on the board, and the others disagreed with his sentiments. However, the National Sheriffs Association, which has 20,000 members, supported Fitzgerald's motion. “Warnings that FirstNet may be off course are very concerning to the NSA, and the NSA encourages that a complete review of FirstNet, as called for by Sheriff Fitzgerald, be undertaken before further progress is made,” the group said in a statement. “The NSA stands arm-in-arm with Sheriff Fitzgerald.”

Takai said that she is confident states will be heard and their comfort level will increase as FirstNet moves past what she calls the “storming and forming” stage. “There is nothing that we have done, except for the hiring of the general manager, that is set in stone,” she said.

Takai said a certain amount of conceptual planning is necessary to facilitate a productive dialogue with states and the public safety community. “We have to be able to say to them, ‘this is what we're thinking in terms of how the technology will work,'” she said. “That doesn't mean that those are the only solutions or that we have all the answers.”