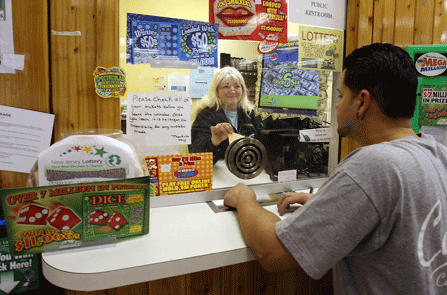 States are cashing in on Americans' love of gambling. States like Nevada and New Jersey, for example, are tapping into the billions of dollars spent on wagering online, while Wyoming is catching up by legalizing a lottery.

The 43 states where lotteries were legal last year made more than $19 billion in profits. State and local governments reaped an additional $8 billion in taxes from commercial and racetrack casinos. And while the online gambling market is hard to estimate, potential revenue for states is in the billions of dollars.

Republican Gov. Brian Sandoval hailed his state's new Internet gambling law as “the framework that will usher in the next frontier of gaming in Nevada.”

In Wyoming, the action was more modest. The state last month became the 44th state to legalize a lottery. But in an unusual move, lawmakers banned the lucrative and popular scratch-off tickets and electronic video lottery games.

“That was the only way we could get that passed,” said state Rep. Dave Zwonitzer, a Republican who has been pushing for several years to legalize a lottery. “We're not into scratch tickets or any kind of video lottery — anything that might be considered instant gratification,” he said.

Lottery ticket buyers typically have to wait hours or even days to find out if they're winners. But with instant tickets, “you might dig down into your pocket and throw another $5 or $10 at it” until you win, Zwonitzer said.

The decision could prove costly for Wyoming when compared with other states' gambling take. “The bulk of lottery revenues nationwide comes from instant scratch-off tickets, so that is an important restriction,” said Philip J. Cook, a Duke University economics professor who has studied lotteries.

State lottery sales amounted to an estimated $68.8 billion in 2012, and 51 percent of that comes from instant lottery tickets, according to a Stateline analysis of lottery sales figures from the North American Association of State and Provincial Lotteries.

In lottery states, outlawing instant tickets is unusual. North Dakota is the only other state with a lottery that does so, according to Charles Strutt, executive director of the Multi-State Lottery Association, which represents states that offer multi-state games such as Powerball, Mega Millions and Hot Lotto.

The only states without lotteries are Alabama, Alaska, Hawaii, Mississippi, Utah and the gambling mecca Nevada. Hawaii and Utah don't have any form of legal gambling.

As Stateline has reported, the U.S. Justice Department's reversal of its ban on Internet gambling in December 2011 has many states scrambling to figure out how to regulate and tax the estimated $4 billion that Americans now spend gambling illegally online. That decision opened the door to legal gambling over the Internet, except for sports wagers, according to Jonathan Griffin, who tracks gaming for the National Conference of State Legislatures.

The ruling doesn't automatically legalize Internet gambling. States still have to pass legislation allowing it and develop regulations overseeing it. Nevada became the first state to allow online gambling within its own borders and also interstate gambling that occurs across state lines. Under a law passed in February, the Nevada Gaming Commission is charged with coming up with regulations allowing the governor to enter into agreements with other states to conduct interactive gambling.

Proposals in Congress to regulate online gambling have stalled.

Not everyone wants online gambling or online lotteries. Utah last year reiterated its opposition to gambling with a law that clarifies that any form of Internet gambling is also illegal. Colorado and Michigan lawmakers have debated bills to ban the sale of lottery tickets over the Internet. (Illinois and Georgia already sell lottery tickets online.)

Despite the lottery approval last month, gambling is still a divisive issue in Wyoming, where some residents have concerns about addiction and social problems.

“I commit to keeping a close eye on any social impacts of the lottery when it gets up and running to see if there are ways to address those,”  Republican Wyoming Gov. Matt Mead said in a statement when he signed the legislation. Wyoming expects to reap up to $9 million a year in lottery revenue, with the first $6 million designated for cities and counties and the rest going to schools.

Wyoming's gain is likely Colorado's loss. Wyoming's lottery could cost Colorado more than $1.26 million in sales and $466,000 in potential revenue a year. That's what was spent by Wyoming residents who drove across state lines for their lottery fix, according to Brooke Christopher, a Colorado Lottery spokesman. Most of Wyoming gambling money had come from 12 retailers in the Colorado cities of Carr and Wellington, both a short drive from Cheyenne, Christopher said.

Video lottery terminals and instant tickets are seen as triggers for problem gambling, according to Keith S. Whyte, executive director of the National Council on Problem Gambling. Problems are related to the high speed of play (it takes just seconds) and the high frequency of play (a player can scratch or push a button dozens of times a minute), he said.

Fewer than a dozen states have video lottery terminals. Neither Texas nor Florida allow them, yet they have among the country's most profitable lotteries, largely because their populations are so much bigger than other states, said David Gale, executive director of North American Association of State and Provincial Lotteries (see list).

Whyte said he is heartened that the Wyoming legislation will set aside $200,000 of unclaimed prizes to programs for problem gamblers. He doubts the restriction on instant tickets and video lottery terminals is a responsible gambling measure. “The bottom line,” he said, “increased gambling increases risk of increased gambling addiction.”

Wyoming's state Rep. Zwonitzer acknowledges that his measure isn't going to totally restrict gambling. The state already has gambling at the Northern Arapaho Tribe casinos in Riverton, in the middle of the state.  And there's the Internet. “You can go online and lose your house in the middle of the night, drinking beer in your pajamas,” he said.

The new lottery law will sunset in six years, “so we will look at it totally” then, he said.