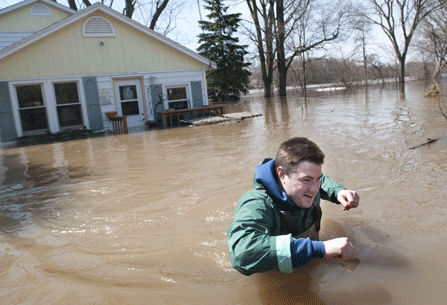 Joe Biggerstaff wades away from his mother's home north of downtown Grand Rapids, Mich. The rising Grand River has driven hundreds of people from their homes in western Michigan. A network of stream gauges on this river and across the country will be dinged by sequestration cuts. (AP)

Spring is off to soggy and sometimes deadly start in the Midwest, where floodwaters have driven thousands of people from their homes and killed at least four.

The human toll could have been worse, forecasters say, if they couldn't quickly track the rise of the rain-swollen Mississippi, Illinois or other rivers that have spilled over their banks.

A network of gauges provides that information to officials in flood-prone states, recording the rise and fall of waters across the U.S. But that 8,000-gauge network, called the National Streamflow Information Program, may shrink due to paralysis in Congress.

As many as 375 gauges could shut down in the coming months, according to the U.S. Geological Research Survey, the agency that oversees the program. That's unless Congress passes a budget to undo the across-the-board spending cuts known as sequestration.

The shutoffs would add stress to a system that's already shrinking due to cutbacks at state and local governments, who partner with federal agencies to fund it.

As climate change increases the likelihood of extreme droughts and floods, experts say shutting off the stations, which can each cost about $15,500 annually to maintain, could have devastating consequences. 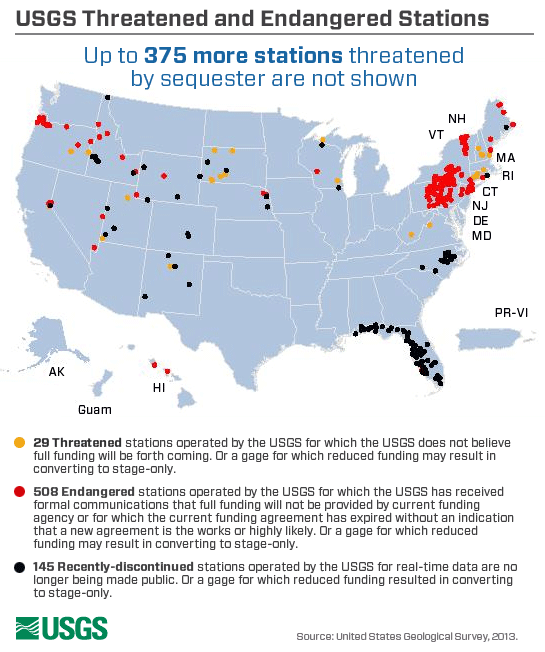 The USGS says 145 stations have recently been discontinued, with much of Florida hit the hardest. Meanwhile, 508 are considered “endangered,” indicating funding has not been renewed. Many of those are concentrated in the Northeast. Another 29 are “threatened,” meaning the agency doesn't expect to find future funding. Those numbers exclude gauges impacted by sequestration.

The cutbacks threaten to delay flood warnings and hamstring those who use the data for a host of other activities: mapping flood plains, studying water quality, allocating water and constructing dams or bridges.

“All of these gauges — in one way or another — are used for the protection of life and property,” said Michael Norris, the network's coordinator. “They're used for so many things, and the public doesn't even know what they are.”

The need for data was brought up Tuesday at the U.S. Supreme Court, where Texas and Oklahoma are sparring over water in the Red River Basin. Attorney Lisa Blatt, representing Oklahoma, said the lack of streamflow gauges in the basin makes it nearly impossible to tell how much water each state is drawing, and whether they are adhering to a four-state compact.

When it comes to flooding, emergency officials say the data can be a life-or-death matter.

Floods prompt about 75 percent of all presidential disaster declarations, and in recent years, they've damaged billions of dollars-worth of property. The human toll can be especially great in the case of flash floods, quick-setting overflows caused by sudden torrential rains. It was that type of flood that killed at least 26 people in May 2010 across Tennessee and Kentucky.

Warnings can reduce the human and economic toll of floods, studies by the National Oceanographic and Atmospheric Service (NOAA) have found. Just one hour of lead time can reduce damage by 10 percent, and longer-term flood preparation, such as building levees and laying sandbags, can save an estimated $163 million nationally each year.

“Data was absolutely critical,” last week when the Grand River's surge forced some 1,700 people to flee their homes in Kent County, Mich., said Mark Walton, manager of the National Weather Service Forecast Office in Grand Rapids. “Without it, we would have basically been flying blind,” he said, using a phrase several forecasters and water experts have repeated.

Though homes and business faced serious damage, no one has been reported hurt or injured. The gauges played a large role in that success story, Walton said, particularly in Grand Rapids, where the river crested at a record height.

“If we would have had gauges go down there,” he said, “…that would have been catastrophic.”

Last year, Michigan was at risk of losing several gauges, including those near cities with sizeable populations. But the USGS was able to scrape together enough local support to keep them running — for now, at least.

New York recently faced the threat of dozens of shutdowns, including many gauges in the Susquehanna River Basin, one of the country's most flood-prone areas. But after a strong push from Democratic Sens. Charles Schumer and Kirsten Gillibrand, NOAA last month set aside $215,000 in disaster relief to keep some of them running.

Susan Obleski, of the Susquehanna River Basin Commission, said she was glad the funding came through, but it will only last four months. “For something that's as critical as stream gauges, that's not sustainable.”

Norris, the network's coordinator, agrees. He said it needs program-wide funding, not a regional patchwork of last-minute efforts, because much of the nation's hydrology is interconnected. “The flows in New York are affected by what happens in Pennsylvania and Vermont,” he said.

President Obama has proposed to increase the program's budget by about 25 percent. Though the proposed budget has a slim — if any — chance to wriggle through Congress, Norris takes it as a sign that politicians, even those trying to pinch pennies, see the value of the gauges.

“It's a no-brainer,” he said. “Like motherhood and apple pie.”