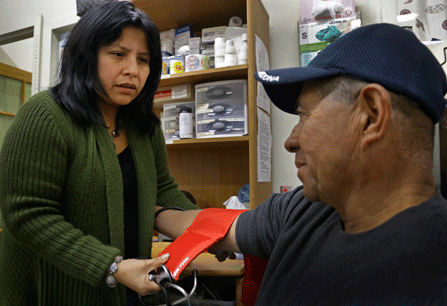 A nurse checks the blood pressure of a man in Oakland, Calif. Governors who decline to expand Medicaid under the Affordable Care Act will give not-yet-naturalized immigrants a federal health care subsidy that U.S. citizens cannot get. (AP)

The Republican governors who decline to expand Medicaid under the Affordable Care Act may give not-yet-naturalized immigrants a benefit that American citizens in their states can't get.

Specifically, those immigrants may be able to purchase federally-subsidized health insurance that will be unavailable to the poorest American citizens. Arizona Gov. Jan Brewer, an outspoken opponent of the Affordable Care Act, cited this glitch as one of the reasons she decided to do an about-face and expand Medicaid in her state. But two other Republican-controlled states with large immigrant populations—Florida and Texas—still haven't decided whether to expand the program or not.

The Affordable Care Act that President Barack Obama signed in 2010 was supposed to cover the poorest U.S. citizens—those with incomes 138 percent or less of the federal poverty level—by enrolling them in an expanded Medicaid program that includes all adults under 65, rather than just pregnant women, the disabled and some adults with dependent children, as the program does now.

The authors of the law envisioned that those making slightly more money—up to 400 percent of the poverty level—would be eligible for federal subsidies to help them purchase private coverage on the new health insurance exchanges that will launch in October.

But the U.S. Supreme Court upended those assumptions by ruling that individual states could decline to expand Medicaid. Since then, governors in about half of the states have announced they will not participate in the expansion.

Right now, only some immigrants who are here legally are eligible for Medicaid, and most of them are forced to wait five years before they enroll. But those immigrants, like most other Americans, still will be subject to financial penalties starting next year if they don't have health insurance, and many of them can't afford to buy it on their own.

That situation prompted advocates for immigrants to argue during the health care debate on Capitol Hill that these citizens-in-waiting should be eligible for the insurance subsidies on the exchanges.  Congress agreed, so all immigrants making less than 400 percent of the federal poverty level will be eligible for subsidized insurance on the exchanges. (However, some argue that there is ambiguity in the law, and that immigrants in the lowest income group will have to wait for a decision by the Centers for Medicare and Medicaid Services before they can claim the subsidy.)

By contrast, in states that don't expand Medicaid, many adult American citizens with incomes below 100 percent of the poverty level will be ineligible for Medicaid, but won't qualify for subsidies, either.

Making subsidized insurance available to the poorest American citizens is one possible fix, but that would cost the federal government more than enrolling them in Medicaid. As a result, it is unlikely Congress would approve such a change.

Immigration advocates blame the glitch on Congress's insistence in 1996 on making legal immigrants wait five years before enrolling in Medicaid.

“The lesson here is one we have to keep on rehashing out,” said Jennifer Ng'andu, director of health and civil rights policy at the National Council of La Raza, the largest Hispanic advocacy organization in the country. “A lot of people don't understand that when punitive action is taken against one group, it often leads to unintended negative consequences for someone else. That is what will happen here.”