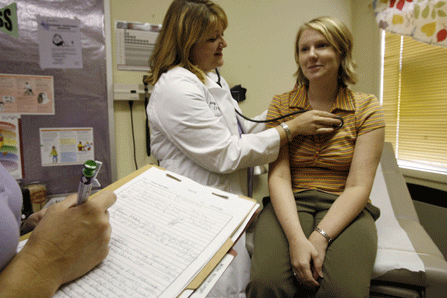 A doctor examines a patient at a clinic in Florence, Ala. Alabama is one of about a dozen states in which a single health insurance company has a virtual monopoly, a situation that may persist when new health insurance exchanges are launched in October. (AP)

In Alabama, if you get your health insurance through your employer and you lose your job, you quickly realize there aren't a lot options for purchasing coverage on your own. Blue Cross and Blue Shield of Alabama has had a virtual monopoly in the state since the Great Depression, and today it covers a whopping 89 percent of Alabamians.

In part, Blue Cross and Blue Shield is dominant in Alabama simply because it has been there for so long—it sold its first policy in 1936—and potential newcomers have found it difficult to convince hospitals and doctors to give them favorable prices so they can compete with the entrenched carrier. But it also has to do with Alabamians themselves: On average, residents of the state are poorer and less healthy than other Americans, making them more expensive to cover and thus less attractive customers.

The lack of competition in nearly a dozen states could present problems when the insurance exchanges that are part of the Affordable Care Act launch in October. The exchanges are supposed to give Americans who do not get health insurance from their employers the opportunity to choose from an array of private insurance plans. The idea is to generate competition between insurers that will lead to lower premiums.

Individuals and businesses with up to 100 employees will be able to shop on the exchanges, and people who can't afford coverage on their own will get government subsidies to help them pay their premiums. About 26 million low-income Americans are expected to receive subsidies to purchase health insurance through the exchanges.

But in states with a dominant insurance carrier, competition and lower prices may not arrive for quite some time.

In general, multiple insurance companies are eager to compete in states that have a large number of health care providers and a lot of people who can afford to pay premiums. A relatively young and healthy population is also an attraction. In states that don't have those characteristics, competition can be sparse.

Alabama ranks 45th in the nation in overall health status, and 46th in median household income, according to the United Health Foundation and the U.S. Census Bureau, respectively. Over the decades, a few major insurance carriers have tried to dip their toes into Alabama, but most pulled out after just a few years.

In other states, there are different reasons for the lack of competition. In Wyoming, for example, the problem is that the state has relatively few health care providers and people have to travel long distances to get care.

Blue Cross Blue Shield of Wyoming dominates the market. Do Wyoming consumers want more choices? “Sure they do,” said Tom Hirsig, Wyoming's insurance commissioner. But Hirsig said it's a huge challenge for new carriers to develop provider networks in Wyoming. “My sense right now is that the individual market inside the exchange is not going to be stacked with lots of competition.”

A shortage of hospitals is the problem in Rhode Island, where there are just 11 hospitals owned by two companies. Health Insurance Commissioner Christopher Koller said Rhode Islanders would like other options, but he isn't sure they'll have them when the state's exchange launches in October.

The vast majority of Americans get health insurance coverage through their employers. Millions of low-income Americans qualify for Medicaid, and seniors can sign up for Medicare. But for people outside of these groups, there are few good options when it comes to health insurance.

Many of these Americans pay high premiums if they are sick or middle-aged—if they can find coverage at all. They also run the risk of purchasing policies that don't cover certain medical conditions or limit the total dollar amount of claims. That's why so many of them go without insurance altogether.

The health insurance exchanges are designed to change that. The policies that are included on the menu will have a uniform set of benefits and pricing structures that will be easy for people to understand and compare.

In addition, the new health law will make it illegal to deny coverage to people who have pre-existing conditions. It also will mandate a minimum set of benefits; prohibit lifetime caps on claims; and require insurance companies participating in the exchanges to spend at least 85 percent of their revenue on health care.

The hope is that this new pool of previously uninsured people will attract insurers to enter new markets, creating competition where none exists now. Poor states across the South and West have the largest share of uninsured people, and thus hold the greatest potential for insurers to cash in on the $350 billion the federal government plans to spend over the next 10 years to help low-income people buy insurance.

Furthermore, the exchanges should allow smaller companies and non-profits to market their products more effectively, challenging entrenched incumbents. “When you go online, the Blue of Alabama won't look so much bigger than the next plan,” said Andy Hyman of the Robert Wood Johnson Foundation. The exchange is meant to be an “equalizer,” Hyman said.

Carriers that dominate a particular state often argue that they hold onto their position by keeping prices down. “There are lots of national carriers out there who would provide a product that is less expensive than what is in the market, if they could,” said Kim Holland, director of state affairs for the Blue Cross and Blue Shield Association. “We're not so naïve as to think that if we don't price our products correctly our customers won't find another alternative.”

Some economists note that in some cases, a dominant carrier can use its heft to negotiate the best prices with hospitals and then pass along those savings to consumers. In some markets, dominant insurers are akin to utilities, explained Paul Ginsburg, director of the Center for Studying Health System Change. “You don't necessarily need more than one,” he said.

Ginsburg said large carriers are likely to get better prices from hospitals and doctors, because providers can't do without them. “I suspect that consumers have actually benefitted from high [market] concentration. It's really a bigger problem for physicians,” he said.

Despite having the least competitive health insurance market in the country, Alabama's individual premium prices compare favorably with neighboring states and are below average for the nation.

But the AMA, which represents doctors, disputes the idea that big insurers always secure the best prices for consumers. They point to national studies showing that when insurance companies merge and acquire smaller companies, their profits go up and so do their premiums.

Two states, Massachusetts and Vermont, already have exchanges, and offer a glimpse of what the future might hold.

When Massachusetts launched its exchange in 2007, new players did not immediately burst into the market. One new carrier, Centene Corporation, joined the exchange to offer a limited network of providers for Medicaid beneficiaries. Competition in the individual market remained relatively unchanged.

But Massachusetts already had a relatively competitive market, so existing carriers competed with each other to create new, lower-cost plans in response to market demand—and pressure from state officials to keep costs down. Despite the emergence of low-cost plans, however, average premium prices have continued to rise.

Earlier this month, Vermont became the first state in the nation to publish preliminary health insurance rates for its exchange. Not unexpectedly, the tiny state of only 626,000 residents did not attract any new insurance companies. And the price of the plans offered on the exchange? They cost about as much as what Vermonters were paying before.