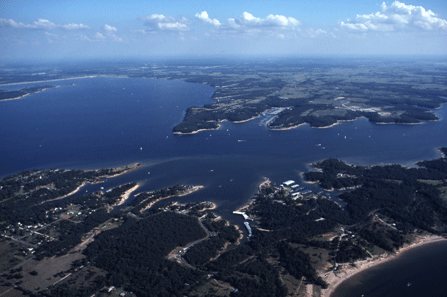 Lake Texoma straddles the border of Texas and Oklahoma. The two states are embroiled in a legal battle over Red River Basin water rights. (AP)

Charlette Hearne thought she and her neighbors in southeast Oklahoma had won their water war against Texas.

A decade ago, Oklahoma considered pumping billions of gallons of water out of the Red River basin—a poor, rural slice of the state—and selling it to Texas to help slake the thirst of the Dallas-Fort Worth area, the country's fastest growing metropolitan region. But Hearne, a water rights lobbyist, mobilized opposition to the move. In 2002 Oklahoma lawmakers placed a moratorium on out-of-state water transfers, blocking the Texas sale.

When the original moratorium expired in 2009, the Oklahoma legislature overhauled the state's permitting process to effectively exclude out-of-state applicants for water.

“Once the deal was on the block, they realized Oklahomans treasure their water,” said Hearne.

But those victories were only the opening salvos in a Red River showdown fought not on the gridiron, where the states' universities are fierce rivals, but in a series of courtrooms. Now the U.S. Supreme Court, which heard oral arguments Tuesday, will have the final say in a dispute likely to reverberate far beyond the combatant states.

In 2007, the Tarrant Regional Water District, a state agency that serves about 2 million people in north central Texas, filed a lawsuit alleging that a four-state water compact signed by Texas, Oklahoma, Arkansas and Louisiana entitles Texas to some 130 billion gallons of water from Oklahoma's side of the Red River basin.

The case before the Supreme Court focuses on the four-state water compact, but it raises broader ideological questions about state sovereignty and interstate commerce.

A sweeping decision could unleash a flood of litigation asking courts to crack open some of the more than 30 compacts that determine how states share water. Adding to the tension is climate change, which is contributing to droughts across the country, further shrinking contested supplies.

“It could have profound effects on state water regimes across the country,” said Mark Davis, director of the Tulane Institute on Water Resources Law and Policy.

Texas is thirsty, and if it wants to keep growing at its prodigious rate, it needs to either conserve more water or find new sources of it—or perhaps both. The state's most recent water plan estimates it will lose 10 percent of its reserves over the next 50 years, a time when its population is projected to surge by 80 percent.

The water shortage has become one of the most pressing issues in the Texas Legislature this year. Much of the talk is about finding money to implement the state's water plan. The plan calls for $53 billion in infrastructure upgrades — including the construction of 20 new reservoirs — that would help Texas meet about one-quarter of its water needs over the next half-century, according to state projections. Previous plans have languished without enough money to implement them.

Even as it battles Oklahoma for water, Texas is fighting New Mexico over its share of water from the Rio Grande. In a case that may also reach the Supreme Court, the state has accused New Mexico of over-pumping groundwater that feeds the Rio Grande, reducing flows into Texas.

“Texas, out of necessity, is dealing with water on all fronts and is using every tool in its toolbox,” says Tulane's Davis. “Sometimes it's easier to find water outside the state than inside.”

The Tarrant water district, which projects it needs an extra 150 billion gallons of water per year, argues that sparsely populated southeast Oklahoma has some to spare.

But locals like Hearne and state Sen. Jerry Ellis, a Democrat who has led legislative efforts to block out-of-state water transfers, bristle at that suggestion. Hearne and Ellis point to long periods without rainfall, small rivers that are so dry during the summer a person can walk across them, and a local paper mill — key to the local economy — that's been challenged by water shortages.

Most of southeast Oklahoma is “abnormally dry” or is experiencing “moderate drought,” according to the U.S. Drought Monitor.

“Why should I want to give [water] to them, when they're putting my paper mill out of business?” Ellis asks in his friendly twang. “We're just looking out for the future of Oklahoma.”

Ellis says the Tarrant district should spend less energy and money on litigation and more on desalinization plants and other conservation efforts.  He notes that Texas cities such as San Antonio and El Paso have dramatically reduced their water use.

“They need to take care of Texas…and we need to do that in Oklahoma,” Ellis said.

Those sentiments are at the root of Oklahoma's decision to crack down on state water transfers. Most recently, that meant overhauling its permitting process to, along with other hurdles, give the legislature the final say over applicants from other states — a de facto moratorium.

The Tarrant water district and Texas argue those laws discriminate against Texas and unconstitutionally block interstate commerce. They say the Oklahoma Water Resources Board should not be allowed to reject an application for more water just because it comes from outside Oklahoma.

“It really is as stark as it gets,” said Eric Jaffe, who filed a brief on behalf of Texas. “It's no different than putting a massive tariff on goods. It hinders the movement of people and businesses.”

Jaffe said water should be treated the same way under the commerce clause as other resources, such as gold, oil or timber.

But Oklahoma says it is simply exercising its sovereignty, and is well within its rights to allocate the water inside its own borders.

“What [Texas] is asking for is unprecedented,” Lisa Blatt, Oklahoma's attorney, told the justices on Tuesday.  Blatt noted that no state has ever been compelled to give up its water to another state.

Arkansas and Louisiana, the two other signatories to the four-state compact, joined Colorado, Idaho, Indiana, Michigan, Nevada and Utah in filing a brief that supports that argument.

Davis agrees with the states, calling the commerce clause argument “a provocative stretch.” Several other experts in water law echoed that notion.

“It would inevitably open up a can of worms, said Marguerite Chapman, a law professor at the University of Tulsa.

The Constitution's commerce clause generally prohibits a state from blocking the movement of goods across state lines, unless Congress specifies otherwise.

In this case, the Supreme Court justices are considering whether Congress did that in 1980 by ratifying the Red River Compact, which took Texas, Oklahoma, Arkansas and Louisiana more than 20 years to negotiate.

Oklahoma and Texas argued Tuesday about one specific part of that agreement.

The compact grants the states “equal rights to the use and runoff” of undesignated water that flows in the sub-basin where the Tarrant district is staking its claim—but only if flows to Louisiana and Arkansas reach a certain threshold. “No state is entitled to more than 25 percent of the water,” the pact says.

Texas says the language gives it license to take 25 percent of the water, regardless of which side of the border the water comes from. Oklahoma disagrees. The pact doesn't explicitly allow, or bar, states from grabbing water across state lines. But if they are allowed to do so, which state would oversee the building of a pipeline, or the possible use of eminent domain to map a route for it? The compact doesn't say.

The absence of those details led Justice Stephen Breyer to cast doubt on whether the framers of the agreement intended to allow cross-state transfers.

“I would have thought there would be a mechanism for doing that,” he said. “We have this enormous administrative mess that would seem to be created.”

Another complication is that no state knows for sure how much water it is getting from the Red River basin, thanks to lax reporting rules in Arkansas and Louisiana unreliable gauges in Texas and Oklahoma. On top of that, the Red River rivals dispute each other's math.

Ellis, the Oklahoma senator, said he feels good about Oklahoma's position. “It's as strong as nine acres of garlic, and I think it will stand.”

But ultimately, he'll just be happy the fight will soon be over. “Basically, I'm just tired of listening to them," he said.

This story has been updated to clarify how many people the Tarrant Regional Water District serves.