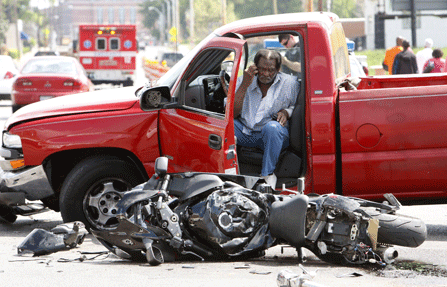 Driver Jimmy Vinson waits for the scene to be cleared after an accident last year in Memphis, Tenn. Initial estimates show that motorcycle deaths increased in 2012, the 14th time in 15 years the numbers rose. (AP Photo/The Commercial Appeal, Alan Spearman)

The number of motorcyclists killed in traffic accidents jumped 9 percent last year, a disturbing increase in a 15-year trend.

Warm weather in the spring of 2012 and a stronger economy likely prompted motorcyclists to hit the road more often, but the trend has seen motorcyclist deaths increase almost every year, wrote Dr. James Hedlund for the Governors Highway Safety Association, a group of state traffic safety agencies.

The year 2012 would be the 14th in 15 years that motorcycle fatalities increased. The only exception was a steep drop in 2009 that was likely tied to the recession. More than twice as many motorcyclists died last year than in 1997, even as the number of motorists overall who died on the road dropped by almost a quarter over the same time.

The group's 2012 estimates are based on fatalities reported in the first nine months of 2012 and estimates for the final three months.

“If the economy continues to improve and gasoline prices remain high, then motorcycle registrations, travel and fatalities will continue to rise unless active measures are taken,” Hedlund wrote.

“The most effective strategy by far is to enact a universal helmet use law in the 31 states that lack them,” he added.

Instead, states are heading in the opposite direction. Michigan repealed its helmet law last year, and it had an immediate impact. Carol Flannagan, a researcher for the University of Michigan's Transportation Research Institute, concluded 16 fewer people in Michigan would have died in 2012 if all had been wearing helmets.

When the law was still on the books, 98 percent of Michigan drivers in accidents had been wearing helmets, Flannagan noted. Last year, it was just 74 percent. The drop was especially big for drivers who had been drinking, Flannagan said.

Legislators in several states frequently debate the merits of mandatory helmet laws, but the last state to impose the requirement was Louisiana in 2004. Now, 19 states and the District of Columbia require adults to wear helmets. Another 28 states require younger motorcyclists to use them, and three states—Illinois, Iowa and New Hampshire—have no helmet law.