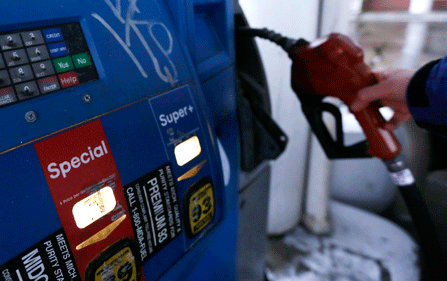 A motorist prepares to pump gasoline in Detroit. The federal government adds an 18.4-cent tax to every gallon of gasoline sold, but congressional forecasters say that will not be enough to pay for transportation projects past 2015. (AP Photo/Carlos Osorio)

The pot of money that the federal government uses to pay its share of transportation projects will run out in little more than two years, congressional forecasters warned Wednesday.

“The current trajectory of the Highway Trust Fund is unsustainable,” the Congressional Budget Office wrote in a report to U.S. House members.

To keep the Highway Trust Fund in the black, they said, Congress would have to raise fuel taxes by 10 cents a gallon, dramatically reduce spending to about 8 cents for every dollar it spends now or find more money for transportation somewhere else.

Over the last five years, Congress repeatedly has chosen the last option. It has transferred $41 billion from the federal government's general funds to the specially designated account for surface transportation.

Even as inflation cuts into the fund's buying power, drivers are buying less gas — and paying fewer taxes — as their cars become more fuel-efficient.

The same issue has confronted states as well. This year, states as diverse as Democratic-controlled Maryland and Republican-held Wyoming have passed gas tax increases. Virginia, where Democrats and Republicans split the state Senate, voted to hike gas taxes as well.

California drivers spent the most in taxes of any state in April, according to the American Petroleum Institute. Including federal taxes, gasoline taxes in California came to 68.5 cents a gallon. Alaskans, who live in the state with the lowest fuel taxes, paid 26.4 cents.

Questions of how to pay for transportation funding have frustrated Congress for years. Lawmakers papered over their differences on the issue last summer, when they passed a two-year transportation package paid for, in part, with an influx of money from the general fund.

But Robert Poole, director of transportation policy at the Reason Foundation, said at a House hearing Wednesday that the chronic funding shortfalls on the federal level will increase pressure on states.

“The states will need to continue taking on a larger share of the burden, compared with the now-ended era of abundant and ever-increasing federal funding,” Poole said in a written statement. “Congress needs to give the states more tools to enable them to increase highway-user revenues and to shift more toward financing large-scale projects, rather than paying for them out of annual cash flow.”

Congress should lift a ban on states from tolling interstate highways, Poole said, so states can use toll money to improve those roads.

An advocate with the U.S. Chamber of Commerce told House members that the federal government needs to continue paying for transportation improvements.

“We strongly urge Congress to continue to reject cuts to federal program levels that would, in turn, pass the buck to states, localities and the private sector. These cuts are not acceptable to the chamber,” said Janet Kavinoky, the chamber's executive director for transportation and infrastructure. “This option is tantamount to abdicating responsibility for interstate commerce.”

Instead, she said Congress should raise gas taxes, because it is the “simplest, most straight-forward and effective way” to raise transportation money. “This debate… will never be convenient. But matters of convenience are not what Americans ask of their leaders in Washington,” she added.