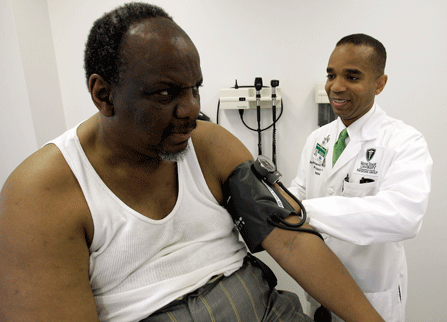 A doctor checks a patient's vital signs at a Detroit hospital. In Michigan and many other states, a single health insurer dominates the market, a situation that may endure even when health insurance exchanges launch in October. (AP)

Part One of Two Parts

The White House sums up the central idea behind the health care exchanges in the new federal health law with a simple motto: “more choices, greater competition.”

But even some stalwart supporters of the Affordable Care Act worry that in many states, people won't have a lot of health insurance choices when the exchanges launch in October.

Health economists predict that in states that already have robust competition among insurance companies—states such as Colorado, Minnesota and Oregon—the exchanges are likely to stimulate more. But according to Linda Blumberg of the Urban Institute, “There are still going to be states with virtual monopolies.” Currently Alabama, Hawaii, Michigan, Delaware, Alaska, North Dakota, South Carolina, Rhode Island, Wyoming and Nebraska all are dominated by a single insurance company. The advent of the exchanges is unlikely to change that, according to Blumberg.

Competition aside, the exchanges face a number of technical and logistical problems. No less a figure than Montana Sen. Max Baucus, one of the chief Democratic authors of the ACA, said in a hearing earlier this month that he sees “a huge train wreck coming” when the exchanges open for business. Meanwhile, a March survey by the Kaiser Family Foundation indicates a majority of Americans still don't know what a health insurance exchange is, and skeptics wonder how many eligible individuals will show up.

The exchanges were conceived as private marketplaces operating within federal guidelines. They are designed to give Americans who do not get health insurance from their employers the opportunity to choose from an array of private insurance plans, and to generate competition between insurers that will lead to lower premiums.

Individuals and businesses with up to 100 employees will be able to shop on the exchanges, and people who can't afford coverage on their own will get government subsidies to help them. About 26 million Americans are expected to purchase health insurance through the exchanges.

But it is unclear how many insurance carriers will decide to seek approval for selling their products through these online marketplaces. Insurance companies have been mostly silent about their plans, with some citing uncertainty about federal and state rules as a reason for holding back.

Some fear that any uptick in competition will bypass those states where doctors are in short supply and the number of hospital systems is limited. A recent analysis by the American Medical Association found that a single insurance company held 50 percent or more of the market in nearly 38 percent of local markets nationwide.

On top of this lack of competition, some of the new federal regulations may push up premiums, at least in the short term. For example, under the health care law insurers will have to cover everyone, including people with pre-existing health conditions. Insurers are likely to raise their premiums to cover the cost of insuring these people who are less healthy.

The mandate that everybody must have insurance is intended to balance this new cost by adding a huge number of young, healthy people to the risk pool. Many of these people, figuring they wouldn't need health care, have been taking their chances without coverage. But because the federal penalties for not having insurance are so small, especially before 2016, many of the healthiest people may continue to decline coverage.

The Society of Actuaries, which is aligned with the insurance industry, predicts that insurance rates for individuals may increase by as much as 32 percent over the first few years of the exchanges, according to a March report. The Obama administration argues, however, that while premiums may rise for certain people in the short term, in the long run the new federal rules will lead to lower premiums.

Cheryl Smith helped run an early exchange in Utah, and as a consultant she now helps other states develop their own marketplaces. But even though she is a strong believer in the concept, she doubts the exchanges will spur competition in the short term. 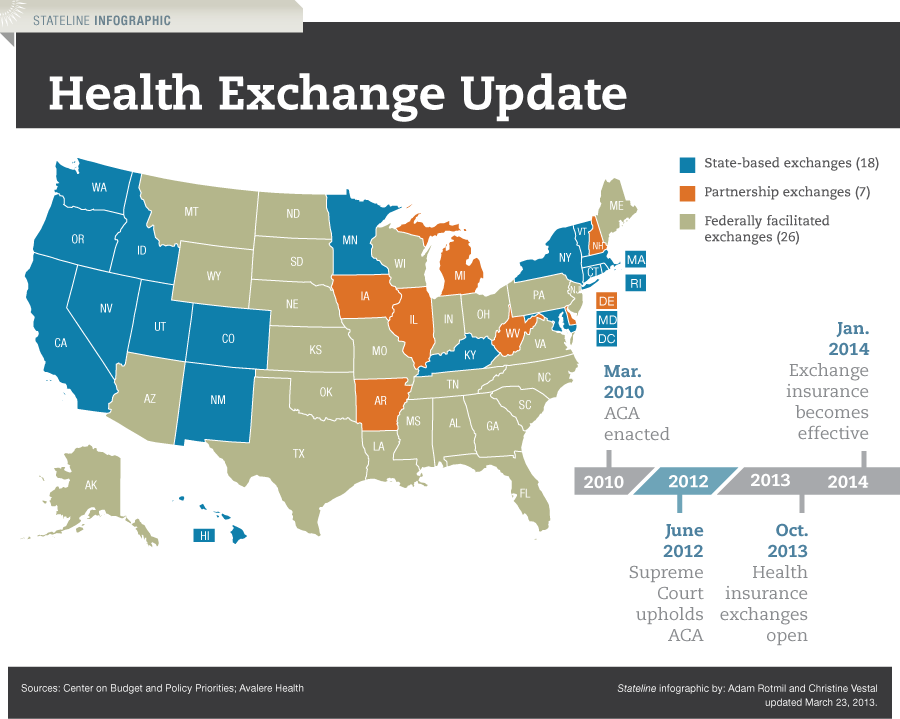 In addition, the U.S. Department of Health and Human Services is supposed to set up a “data hub” that all 50 exchanges will need to plug into to determine whether an individual or family is eligible for Medicaid or federal tax subsidies. U.S. Health and Human Services Secretary Kathleen Sebelius earlier this month assured Congress that the technology would be unveiled in time for the October launch of the exchanges, even though Republicans in Congress last year failed to approve the funding needed to complete the project.

Another cause for concern is the Obama administration's recent proposal to scale back a requirement that small businesses offer their employees a menu of insurance policies. If the proposal is adopted, companies with fewer than 100 employees could offer a single policy to their workers, as they have in the past. Without employee choice, critics say, the small business exchange will do little to pressure insurers to develop lower-priced options.

But supporters of the health law are confident that competition and lower prices will ultimately come. In the meantime, they say, consumers will be better off.  Today many Americans pay high premiums if they are sick or old—if they can find coverage at all. They also run the risk of purchasing policies that don't cover certain medical conditions or limit the total dollar amount of claims. In addition to the new pre-existing condition rule, the health law sets a minimum set of benefits; prohibits lifetime caps on claims; and mandates that insurance companies participating in the exchanges spend at least 85 percent of their revenue on health care.

Despite the federal rules, millions of potential customers will be a powerful draw for insurance companies to participate in the exchanges. Furthermore, the federal government is expected to provide about $350 billion in subsidies to people who can't afford to purchase insurance on their own.

On top of that, if all states eventually choose to expand Medicaid, the federal government will pour another $952 billion into the health care market over the next 10 years, much of which will go to Medicaid managed-care companies and other private insurers.

Some predict that new insurance carriers, made up of hospitals and large physician practices, will emerge. As it becomes more difficult for traditional carriers to make a profit under the federal health law, the most successful new players may be provider organizations that can control medical costs by avoiding duplication and errors and more carefully coordinating the care they provide, said Rick Curtis, director of the Institute for Health Policy Solutions.

Furthermore, Medicaid managed-care companies, which are used to providing care to low-income people, may decide to offer commercial plans on the exchanges. According to Jeff Van Ness of the Association of Community Affiliated Plans, between one-quarter and one-third of the group's 58 nonprofit safety net health plans are expected to offer products on the exchanges in 26 states the first year.