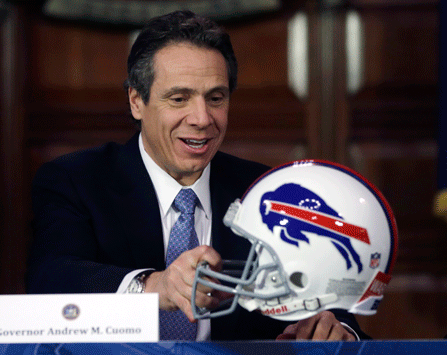 New York Gov. Andrew Cuomo holds a Buffalo Bills football helmet that was presented to him at the state capitol in January. Cuomo supported a 10-year lease extension between the state, Erie County and the Bills that included a $54 million contribution from the state. (AP)

The Buffalo Bills wrapped up a deal to pay for $130 million in upgrades to its stadium last month. As part of the deal, New York state government will pay $54 million and, in return, get a skybox to promote the state to businesses.

The Minnesota Vikings are lining up contractors to build a long-sought stadium with a price tag of nearly $1 billion, even though the state has nowhere near the money it needs to pay its third of the costs.

And the Carolina Panthers scaled back their plans for a stadium overhaul, after North Carolina lawmakers refused to go along with the team's idea of raising local taxes for stadium renovations. Now the Panthers want $113 million in improvements, less than half of the club's original proposal.

Yes, after a timeout for the recession, the National Football League is back in the game of getting public money to pay for better stadiums. In many cases, teams want to replace or renovate stadiums finished during a 1990s sports construction boom.

“We had a real lull from the beginning of the Great Recession,” said Victor Matheson, an economics professor at Holy Cross who studies sports. “Just in the last year, however, we've seen the tide turn… We have a little bit of a backlog, so you're seeing a bunch of stadiums on the table now.”

As finances for states and cities improve, many of their marquee teams are asking for help—and threatening to leave for Los Angeles if they do not get it. That leaves public officials in a bind. They may not want to raise taxes, but they do not want to be blamed for losing a city's favorite team.

That can lead to some awkward situations.

North Carolina Gov. Pat McCrory, a Republican and former mayor of Charlotte, said last month the state could not afford the $62 million the Panthers wanted to help upgrade Bank of America Stadium in his home city. Tax-averse lawmakers in the Republican-controlled legislature balked at a plan to tax Charlotte restaurant patrons, another major piece of the Panthers' plan.

In the end, legislators gave the Panthers only half what they originally asked for, by diverting money that would have otherwise gone to the city's convention center.

Georgia lawmakers were so skittish about paying for a new stadium for the Atlanta Falcons that they passed the job onto the city. The source of funds — hotel taxes collected in Atlanta — stayed the same, but the bonding authority changed.

Voters in the Miami area will decide in May whether to approve a 1-cent sales tax increase to renovate the Miami Dolphins' stadium. The ballot question comes just two years after the same voters ousted their mayor, in part because he backed the construction of a new stadium for the Florida Marlins.

Both public officials and NFL teams are under pressure to build more modern stadiums.

Only three NFL teams since 1990 have not either renovated their stadiums or built completely new ones, according to a study by Matheson and Lake Forest College professor Robert Baade. Those three teams are the Minnesota Vikings and San Francisco 49ers — which are both building new stadiums now — and the Miami Dolphins franchise, which is asking voters for renovation money.

In fact, the vast majority of major professional sports teams in baseball, basketball, soccer and hockey have also received new homes. But the NFL, followed closely by Major League Baseball, depends most heavily on public subsidies, Matheson and Baade found.

NFL teams want stadiums with plenty of pricey luxury boxes, and they want to be able to sell “personal seat licenses” that allow season ticket holders to keep their seats from year to year. The franchises can hold onto that money, instead of sharing it with the rest of the league, if it is used to pay for stadium improvements.

“The NFL is somewhat different than the other leagues, because it doesn't really matter where the teams play; it only matters that they are playing in a new, heavily subsidized luxury suite venue,” said sports economist John Vrooman of Vanderbilt University.

The football league's lucrative TV deals — which will soon bring in $6 billion a year — and its extensive revenue-sharing make location less of an issue than in other sports, Vrooman said. The league splits up that TV money, and NFL teams share a bigger portion of the league's revenues than clubs in other professional sports leagues. NFL clubs get about 60 percent of their income from revenue-sharing, compared with 40 percent for pro baseball, 20 percent for basketball and 10 percent in hockey.

The influx of money from luxury suites and personal seat licenses has helped NFL teams rely less on public money to build new stadiums, but it also makes it harder for average fans to afford tickets.

He also noted that many of the clubs now asking for new stadiums were among the first to build in the 1990s stadium construction boom. Owners may be losing their tax advantages for leasing those stadiums. In financial statements published by Deadspin, the Carolina Panthers said their depreciation schedule for the stadium and other improvements was 15-25 years, Vrooman noted. The stadium has been open for nearly 17 years. 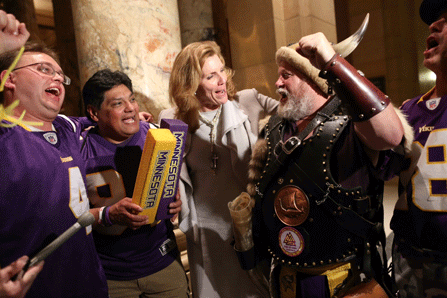 Minnesota state Sen. Julie Rosen, a Republican and the author of a Minnesota Vikings stadium bill, celebrates the passage of the bill with a few Vikings fans outside the Senate chambers last year. Lawmakers agreed to have the state pay $348 million of the stadium's $975 million cost. (AP)

Still, it is difficult for public officials to say “no” to NFL teams, because the stakes are so high.

NFL franchises threaten to move, usually to Los Angeles, if they do not get stadium improvements. “The thing is, that is an extremely credible threat,” said Matheson of Holy Cross. Los Angeles has not had an NFL team since 1994, even though it is the second-largest media market in the country. Two potential ownership groups have put together credible plans to build stadiums for teams willing to move to southern California.

Right now, the San Diego Chargers and the St. Louis Rams (which left Los Angeles in 1994) are threatening to leave for Los Angeles. At least seven other teams have made the same threat in recent years, according to Vanderbilt's Vrooman.

“In the NFL's extortion game, the L.A. market may be more valuable to the NFL empty than occupied,” he said.

Teams can also play cities against their suburbs, or suburbs against suburbs. The Dallas Cowboys would never leave the Dallas area, but owner Jerry Jones successfully played Dallas against Fort Worth and Arlington to get the most lucrative deal, Matheson said. Arlington lured the Cowboys with the promise of spending $325 million, raised from new local taxes, on Cowboys Stadium.

The Atlanta Falcons used the prospects of a move to Los Angeles or to the Atlanta suburbs during the stadium's negotiations this spring. It worked. The city council voted 8-1 to build a $1 billion stadium with a retractable roof downtown, using $200 million from the city's hotel and motel tax. “They were going somewhere,” Mayor Kasim Reed said of the Falcons. “Whether that was the suburbs or another city, they weren't staying here.”

The NFL also used another powerful incentive to back the Falcons' bid for a new stadium: the allure of hosting a Super Bowl.

Even before he was sworn in, Georgia Gov. Nathan Deal, a Republican, urged the NFL to hold another Super Bowl in Atlanta. But NFL Commissioner Roger Goodell said the city needed a new stadium first.

One of the attractions of the Super Bowl, or of stadium improvements generally, is the hope that they could boost the local economy and tax revenues.

The Miami Dolphins have said they will not use tax money for stadium renovations unless the NFL awards the city the Super Bowl in either in 2016 or 2017. The league will announce in late May where those championships will be held.

A lobbyist for the Dolphins told Florida state lawmakers that, if Miami scored Super Bowl 50 in 2016, Miami's economy would get a boost of $500 million.

But many, if not most, economists dispute such high figures. The Dolphins' estimates, for example, do not compare spending during a Super Bowl to normal tourism spending during a winter week in south Florida. They also do not account for increased spending when large companies raise prices on rental cars or hotel rooms, and then use that money far from Miami.

Matheson is especially skeptical of Miami's hopes that it will attract several Super Bowls with a new stadium. The city has hosted more of the championship games than any other location, but now the NFL is rewarding cities all over the country for building new stadiums. Detroit and Indianapolis have hosted Super Bowls lately; New York will be the host city next winter.

“The NFL is giving away these offers to every single team with a moderately warm climate or an indoor stadium,” Matheson said. “If Miami builds a new stadium, there's no doubt they're getting a Super Bowl, but they're not getting three or four Super Bowls over the next 10 years. They're getting one Super Bowl in the next 15.”