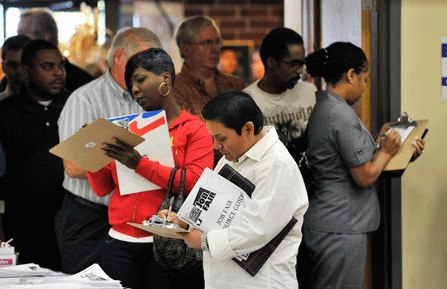 Unemployed workers fill out applications during a jobs fair in Rockford, Ill. in 2010. Unemployment in Illinois was 9.5 percent in March, making it the state with the second-highest unemployment rate. (AP Photo/Jim Prisching)

In the ups and downs of state unemployment rankings, Illinois leapfrogged over several other states and now follows only Nevada with the highest jobless rate.

Once again, Nevada led the country with the highest jobless rates among the states in March at 9.7 percent, compared to the national average of 7.6 percent. The next highest rates were in Illinois (9.5 percent) and California and Mississippi (9.4 percent each). The Bureau of Labor Statistics reported the March jobless numbers Friday.

As Stateline reported last month, California and Rhode Island had bumped Nevada from the top jobless spot in the nation at 9.8 percent each for February while Nevada had dipped to 9.7 percent. Illinois had been 9 percent the previous month.

In terms of the number of jobs lost, Illinois had the second-largest decrease in employment in the country, losing 17,800 jobs in March, following only Ohio, which lost 20,400.

Daniel Rich, an economics professor at Illinois State University, said the state's construction sector is not rebounding as quickly as other states and called the recovery “anemic.”

“We're behind the nation, because that's what we generally are,” said Greg Rivara, a spokesman for the Illinois Department of Employment Security, noting that Illinois typically enters and exits recessions months after the country as a whole. “Is 9.5 percent acceptable? No. Is it surprising? It's surprising only in the fact that we've never been here before. We've never had a recession like we have.”

Just a few years ago, Illinois performed better than most of its neighbors, but that changed once the automobile industry boosted the economies of Michigan and Ohio, said Ed Boss, chief economist for the Illinois legislature's Commission on Government Forecasting and Accountability. “This is a new phenomenon that we've been on the top in the highest unemployment rates,” he said.

Illinois never recouped all the jobs lost during the 2001 recession before the next recession began, the legislative revenue forecasting agency said earlier this year.

Moody's likewise reported earlier this year that despite some favorable signs, Illinois' economy is in “rough shape and the odds of a misstep are high.” Moody's said, “The state is one of just a handful nationally in danger of falling back into recession.”

A weak housing market and poor state finances are largely to blame, including a huge pension gap and other budget holes, Moody's said.