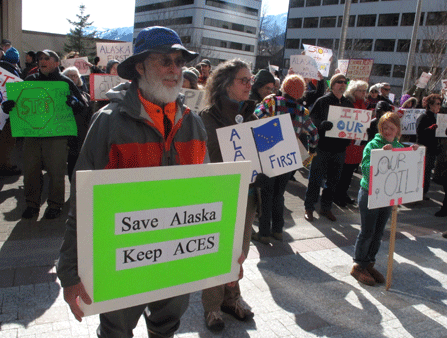 Call it Alaska's great gamble. The state will forgo billions of dollars in tax revenue in hopes of reversing sour economic fortunes.

Alaska, whose economy runs almost solely on oil, has fallen from its perch as the nation's oil king at a time when energy production is surging across the lower 48 states, fueling budget surpluses in North Dakota, Ohio, Pennsylvania and Texas. This new boom puts the U.S. on track to become the world's largest oil producer and a net exporter of natural gas by 2020.

For a variety of reasons, Alaska is losing ground in this expansion. On the last day of its session this week, Alaska's Republican-led legislature approved a massive tax cut for top oil producers that supporters say will jumpstart a production lag threatening the state's long-term ability to provide services.

It was a major victory for GOP Gov. Sean Parnell, a former ConocoPhillips lobbyist who has spent years trying to overhaul a progressive tax championed by former Gov. Sarah Palin in 2007 at a time when few Americans recognized her outside of the state.

“We are signaling to the world that Alaska is back, ready to compete, and ready to supply more energy once again,” Parnell said.

Whether that will be the case remains to be seen.

In a state that derives 90 percent of its revenue from oil and has no income or sales tax, this much is certain: Parnell's experiment could make or break Alaska's economy, providing an example for lawmakers elsewhere of how energy companies respond to dramatic changes in a state's business climate.

Parnell and his supporters say the answer to Alaska's woes is simple: Cut taxes.

Under the governor's plan, oil companies will be taxed at a flat 35 percent rate, while a series of incentives could drive the effective rate as low as 14 percent. It will replace Palin's progressive tax structure, called Alaska's Clear and Equitable Share (ACES). That rate began at 25 percent and eclipsed 50 percent when oil prices were high.

“This is Alaska's most important decision in the last half of the century,” said Dan Donkel, owner of Donkel Oil and Gas, an independent producer.

On Wednesday, ConocoPhillips said it will add activity on the North Slope, spurred by the overhaul. It plans to bring another rig to Kuparuk, North America's second largest oil field, and work with co-owners to fund a new drilling site in the area. 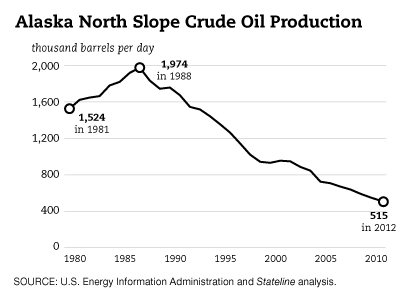 But a host of critics fear the worst. They call the tax plan an overt gift to Alaska's “Big Three” oil producers — Exxon Mobil, ConocoPhillips and BP. Those companies have an outsize influence on a citizen legislature that includes two senators who moonlight for ConocoPhillips (the Senate bill passed 11-9, with both of them voting yes). Critics say the tax cut will do little to spur production and starve the state of billions in revenue that could help weather the economic storm.

“It effectively gives away Alaska's oil,” said Ray Metcalfe, a former Republican legislator who is spearheading a petition effort that would let Alaskans vote on the tax break on the 2014 ballot.

One line on a graph has worried Alaskans for years. Call it the North Slope's southward slope, a nearly smooth curve showing crude oil production has plunged almost every year since 1988, when it peaked at nearly 2 million barrels per day. It has fallen to about 500,000, allowing Texas, North Dakota and California to surpass Alaska.

Alaska's lag has meant trouble for its budget, and a threat to its permanent fund, a 37-year-old account meant to ensure the state guards its oil wealth for future generations. Last year, its revenue remained 19 percent below its peak the year before the recession, when oil prices were higher. That was the fourth biggest dive in the country, according to the Nelson A. Rockefeller Institute of Government.

Alaska isn't the only energy state that's struggling. Wyoming's tax revenue has fallen almost 17 percent from its pre-recession peak, partly due to increased competition and the nose dive in natural gas prices that has accompanied the surge in activity.

But an even more troubling possibility looms in Alaska: the shutdown of the TransAlaska Pipeline System, its lifeline to the West Coast. If too little crude courses through the 800-mile- system, the pipes could freeze, corrode or experience other issues that could ultimately close it down. Under the least optimistic scenario, that could happen as early as 2026, the U.S. Energy Information Agency projected last year.

“The goal is more investment, as soon as possible, to get more oil in that pipeline," Lance Pruitt, the state's House Majority leader said at a press conference last month. “We can't wait any longer.”

The Palin policy helped the state sock away billions of dollars even as production declined. In 2008, for instance, a time of high prices and profits, it generated $6.8 billion in tax revenue, $2.4 billion more than it would have under the previous taxing policy, according to a 2010 Alaska Department of Revenue report.

But critics, led by Parnell, argue it has eroded Alaska's competitiveness with other states, shrinking companies' investment and ultimately driving down production.

The primary argument was that compared to other states, investors in Alaska faced a much higher “take,” the share of resources that go to the government over a project's lifetime — a measure that can be calculated in different ways.  Alaska's average stands at 76 percent, according to a 2011 report commissioned by the U.S. Department of the Interior. That's far above Wyoming's take (66 percent), but the same as Texas and far below Louisiana (85 percent).

But relying too heavily on that statistic to compare fiscal regimes can be misleading, experts say, because it may not capture large differences in the states' structures and, in essence, compare apples to oranges.

Alaska, for instance, owns the mineral rights of its most tapped lands, meaning it nets royalties on top of profits. That could inflate some calculations of government take, because companies would have to pay private rights holders in other states.

“Those who are unfamiliar with the shortcomings of the government take as a criterion tend to overuse it,” the Interior-commissioned report says.

Also overlooked is that producers can fetch a much higher price for North Slope oil than they could for oil produced across much of the lower 48, netting higher profits. North Dakota oil, for instance, currently sells at $25 per barrel less than what's produced in Alaska. That is partly driven by the glut of oil in the Bakken and a lack of pipelines to send it out —an issue that's improving, but slowly.

“[Alaska is] an extremely different market to break into,” said Bill Wielechowski, a Senate Democrat and key critic of the overhaul. “But once you do break into it, it's an extremely lucrative place to do business.”

Some economists argue that lowering production taxes does little to spur more investment. “I don't even think the question is really hard,” said Shelby Gerking, a professor of environmental economics at the University of Central Florida, who examined the issue for Wyoming's legislature in 2000.  “State production taxes just cut into the profits a little bit.”

Gerking says producers typically respond slowly to changes in production taxes because it can take years and millions of dollars to lay down roots in one location.

Parnell's office did not respond to repeated questions about his legislation.

So how has ACES affected Alaska's economy?

That's a tough question, largely because it's hard to control for other market variables. The Interior-commissioned report highlights a sharp drop in new licensing in the two years after passage — despite rising oil prices — as a sign that ACES drove down investor confidence.

Parnell's critics, however, point out the rate of Alaska's production decline has slowed slightly in recent years, while oil and gas employment has increased as signs that Alaska's fate under Palin's brainchild is not all doom and gloom.

Meanwhile, several new, mostly small companies have recently entered a market that can be costly to break into because of harsh weather and environmental permitting.  It appears that happened largely because of generous upfront tax breaks available under ACES, which cost the state hundreds of millions of dollars.

In the first three years of Palin's policy, the number of companies filing production tax returns more than doubled, according to the state Department of Revenue.

That surge may soon end, however. Parnell's policy eliminated a credit for capital investment that he said was too costly and put the state at risk of shelling out more money than it takes in during a particularly slow year.

That worries smaller companies still looking to break into the market, along with lawmakers who hope to break the big three's oligopoly.  “We're fighting for our survival,” said Donkel of Donkel Oil and Gas, which has leased 200,000 acres in the state. He contends state regulators favor the Big Three when doling out permits.

“Basically what we're doing is wiping out the competition,” said Rep. Chris Tuck, a Democrat.

Meanwhile, Wielechowski remains optimistic that improvements in technology and new discoveries of unconventional oil and gas open up taps on the North Slope, helping Alaska refill its coffers and keep its permanent fund permanent.

Last year, the U.S. Geological Survey estimated the Slope could hold as much as 2 billion barrels of technically recoverable shale oil, along with 80 million cubic feet of shale-extracted natural gas. If the high end of the estimate proves true, it could fuel decades of development.

“With or without a tax cut,” Wielechowski said, “you're going to see production ramp up.”